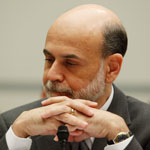 Warren Buffett said Wednesday that the U.S. economy has "no bounce" and will take time to recover, but there is no risk of deflation to push it further into despair. Speaking on CNBC television, the world's second-richest person also praised efforts by the Obama administration and Federal Reserve to jump-start economic activity. He lamented that the slowdown has hurt his insurance and investment company Berkshire Hathaway Inc, which runs close to 80 businesses and in the January-to-March period had its first quarterly loss since 2001. "We have had no bounce" in the economy, Buffett said on CNBC television. Asked whether the economy was still in "shambles," as he had said in February, Buffett said: "I'm afraid that's true." But he added: "I don't worry about deflation at all." – MoneyNews

Dominant Social Theme: The Sage from Omaha tells it like it is – again.

Free-Market Analysis: Whenever we write about Warren Buffett, we get emails defending the man. Obviously he inspires passion, but more importantly he is held up to be – and he holds himself up to be – an educator whose remarkable success is testimony to the current system of saving and investing.

But we don't think Buffett's success is due simply to a collision between an intelligent man and 21st century finance. We tend to believe that Buffett's success has more to do with an astute utilization of certain aspects of the marketplace and corporate ownership. In fact, he realizes a good deal of revenue from OPERATING companies, not merely investing passively in them. And when he does invest in large amounts, he often extracts terms the average investor cannot achieve.

The above excerpt is a good example of why we question Buffett's acumen when it comes to larger financial matters. He uses a Keynesian definition of inflation (price push) while casting deflation as a terrible negative. (In fact deflation should be welcomed during a downturn as it spreads money around to more operations and goods.) We don't of course question his success, but we do believe his great fortune is a testimony to practice over theory and activity over introspection. This is an important point. Buffett is held up and holds himself up as a prototypical savvy investor who lays extraordinary emphasis on understanding theory. In his case it is the theory of value investing as enunciated by Ben Graham & David Dodd. Here's a definition of value investing from Wikipedia:

Value investing is an investment paradigm that derives from the ideas on investment and speculation that Ben Graham & David Dodd began teaching at Columbia Business School in 1928 and subsequently developed in their 1934 text Security Analysis. Although value investing has taken many forms since its inception, it generally involves buying securities whose shares appear underpriced by some form(s) of fundamental analysis. As examples, such securities may be stock in public companies that trade at discounts to book value or tangible book value, have high dividend yields, have low price-to-earning multiples or have low price-to-book ratios. High profile proponents of value investing, including Berkshire Hathaway chairman Warren Buffett, have argued that the essence of value investing is buying stocks at less than their intrinsic value. The discount of the market price to the intrinsic value is what Benjamin Graham called the "margin of safety". The intrinsic value is the discounted value of all future distributions. However, the future distributions and the appropriate discount rate can only be assumptions. Warren Buffett has taken the value investing concept even further as his thinking has evolved to where for the last 25 years or so his focus has been on "finding an outstanding company at a sensible price" rather than generic companies at a bargain price.

Buffett's emphasis on individual stocks tends to reinforce the perception that the market is NOT acted on primarily by outside forces such as central banks. His emphasis on undervalued opportunities reinforces the perception that the market is irrational and that markets themselves are therefore not to be relied upon. Finally, his long-term focus flies in the face of monetarily triggered business cycles, which he also doesn't seem to acknowledge much, if at all.

In our opinion, Buffett is a poster-boy for those who defend the financial system as it is. He is a terrific spokesperson for the powers-that-be, as he not only endorses the current system, he also can be shown (however controversially) to have utilized it to build an extraordinary fortune. But there are plenty who would disagree with Buffet despite his success. In fact, many free-market thinkers would hold that the market is indeed efficient in that it incorporates all known information in pricing.

Of course, there is information that is not available, and that the market therefore does not take into account. But a good argument can be made that markets' exceptional volatility have more to do with an acknowledgement of central bank money flows than irrationality. It is these money flows that give rise to an exaggerated and increasingly global business cycle of the kind that has forced international economy into its current crisis.

When Buffett makes an investment into a company, he will often focus on that company's fundamentals, indicating that where a company is positioned in its market is the most important item of all. But if this were so, why did the entire marketplace nearly capsize last year? In 2008, and again in 2009, those who believe that the positioning of an individual company is paramount would have to admit that outside forces proved far more powerful than often acknowledged within the Buffet paradigm. In bull markets, therefore, Buffett's pronouncements often seem to be self-fulfilling prophecies. But in bear markets, especially severe ones, Buffet is less convincing. He is determinedly micro – not macro – when it comes to the investments he picks and the reasons for them.

Here is a prediction: Buffett will continue to issue contradictory statements throughout this final leg of the business cycle. He will do so because his rhetorical platform, by design or sentiment, does not support an analysis of the larger financial system and its evident flaws, most prominently central bank price over-production of money and the resultant aggravation of the boom-bust business cycle. Another prediction: Buffett will continue to remain relatively quiet when it comes to commodities generally and precious metals in particular. Those in Buffett's camp will continue to trumpet his equity triumphs, but there will be a conspicuous silence when it comes to the way he overlooked gold as it traveled from US$300 to US$1,000 in the 2000s – likely, with much more to go. Wonder why he ignores that sector?