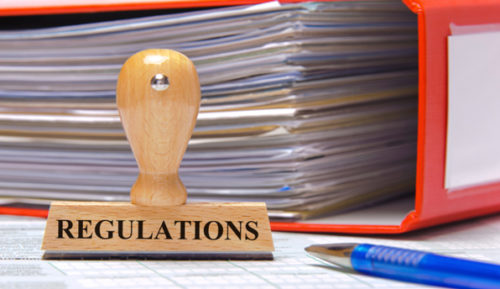 STAFF NEWS & ANALYSIS
Businesses are Regulating Themselves Before the Government Gets the Chance
By Joe Jarvis - August 25, 2018

Is Walmart the evil harbinger of late-stage capitalism? Or is it the hallmark of a civilized society?

Walmart has been criticized for paying workers poorly. Then again, who else is willing to pay that 90-year-old above minimum wage to wave at customers as they walk in the store?

Because Walmart buys in bulk and uses cheap labor, it can keep prices ridiculously low. That provides a major service to poorer people. It increases their standard of living. Their money goes further. They can afford more of what they need.

Then again the products are not the highest quality. If you want something unique or long-lasting, Walmart might not be the place to go.

Yet now they have voluntarily removed certain products because of the dangerous chemicals inside.

Walmart has banned two paint strippers from its stores because they contain chemicals believed to cause cancer.

The chain announced Monday that it will no longer sell products carrying paint strippers that contain methylene chloride and N-Methylpyrrolidone (NMP) starting in February.

The decision follows in the footsteps of retailers Home Depot, Lowe’s and Sherman Williams, which all announced a similar move this year.

The chemicals in question, commonly found in paint thinners and metal cleaning products, can affect the central nervous systems of those in contact with them. Long exposure can at times lead to liver cancer. The chemical has been linked to dozens of deaths…

“At Walmart, we are committed to providing our customers with access to affordable, effective and more sustainable products. We will continue to work with suppliers, NGOs, academics, government and industry stakeholders as we advance our sustainable chemistry commitments,” Zach Freeze, senior director of strategic initiatives for sustainability at Walmart, said in a statement.

The EPA has opted not to ban the chemicals, though at one point there were plans to do so. But this example suggests that even absent government regulation, certain companies are pro-active in protecting customers.

You might think Walmart only banned the chemicals to look good in the eyes of the public. And you might be right.

Who cares? Applying beneficial policies to satisfy the public is an effective form of regulation.

So it doesn’t actually matter how “evil” Walmart may or may not be. It responds to the demands of consumers.

Consumers don’t want dangerous cancer-causing chemical in their products. And it doesn’t take a government agency to protect us. In this case, the private industries beat the government to it.

And that seems to be happening more often.

A handful of cryptocurrency exchanges have joined together to form a regulatory group called the Virtual Commodity Association.

The initial participants in the VCA Working Group will include: Bitstamp, Inc., bitFlyer USA, Inc., Bittrex, Inc., and Gemini Trust Company, LLC. The Working Group will work towards the goal of establishing an industry-sponsored, self-regulatory organization (SRO) to oversee virtual commodity marketplaces. The VCA will have an executive director, independent board, and establish a framework for industry best practices. The VCA interim Executive Director will be Maria Filipakis. Ms. Filipakis was formerly an Executive Deputy Superintendent at the New York Department of Financial Services (DFS) and was instrumental in drafting the DFS rules and regulations for virtual currency.

At the initial meeting, Working Group participants expect to discuss:

At first, something like this might sound like collusion. And if I were them I would be worried about anti-trust suits. For all you know this could be considered anti-competitive practices by federal authorities. These laws are written so vaguely that practically any corporate behavior could violate them.

But when you really start to think about it, it makes perfect sense for these exchanges to regulate themselves. By banding together and voluntarily submitting to the rules the group comes up with, they can ease customer fears.

We’ve discussed in the past how almost half of ICOs (Initial Coin Offerings) last year went broke. 10% of all funds raised were stolen by hackers. And only 5% of tokens were operating at the time of their ICO.

The accounting firm Ernst and Young found that a majority of whitepapers included basic errors and contradictions. Many lacked clear explanations about the project or even the purpose of the token.

So what’s the best way to increase your customer base if you are in this apparently sketchy industry? Give consumers confidence by voluntarily adding higher standards for the digital tokens you list on your exchange.

Again, the public does not have to depend on good intentions or honorable people. The desire for profits is enough to keep these exchanges honest. And going one step further to give an independent organization control over certain practices sends trust signals to potential customers.

The complaints of those who use the term late-stage capitalism are applicable only to the fascist crony capitalist system that we discussed yesterday. It is through government regulators that “capitalists” rig the system.

So in that sense, if capitalism is just another word for corporatism or protectionism, then let’s hope it truly is dying off in favor of the free market.

That is what I see when Walmart beats the EPA to regulating its chemicals. And when cryptocurrency exchanges beat the SEC to regulating ICOs.

That’s free market regulation. And it is effective.