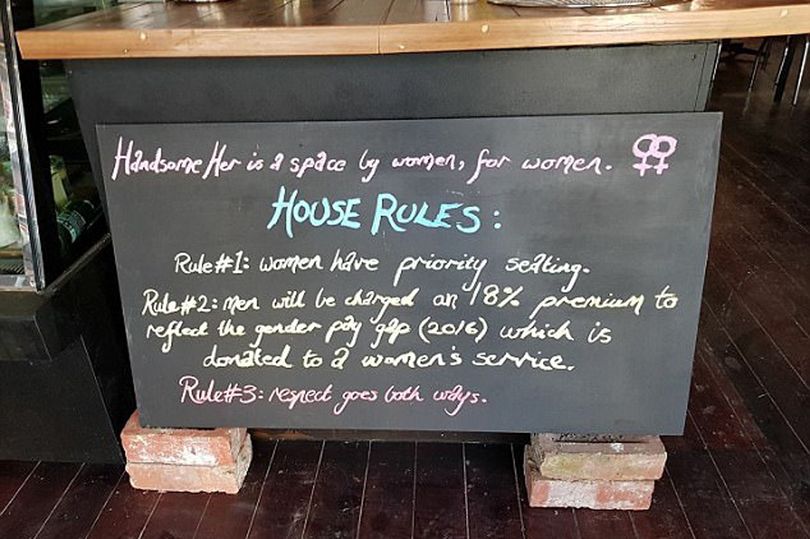 As a business, if you want to promote equality, the first thing you need to do is make sure you treat your customers unequally based on their gender.

I love when people empower themselves by becoming business owners. Running a business is certainly not easy, but it still frees you from certain constraints. For instance, pay is not decided arbitrarily by a boss, it is based on the services you provide.

Ironically, one business owner in Australia is using her success to promote inequality.

The cafe in Australia touts their discriminatory practices. An article about the cafe on The Mirror reads: Cafe charges men more than women – for a very powerful reason.

Yes, for a powerful reason. Their discrimination is powerful because statistically, women earn 18% less than men in Australia. That is why it is okay to discriminate in hiring as well; the cafe called Handsome Her only hires women. And they also give preferential seating to women. Men must get to the back of the bus–or cafe, whatever.

The 18% “man tax” is technically optional during the one week per month the tax applies, with the proceeds going towards women’s causes. I wonder how many women volunteer to pay the tax, seeing as it is for a cause they presumably agree with.

Also ironic: the fact that it is all women working at the cafe. About 81% of workers in the category, “Hosts and hostesses, restaurant, lounge, and coffee shop,” are women. This gives us a glimpse into the true issue of the pay gap. Sometimes is not actually a pay gap, it is a work choice gap.

But hey, if this cafe owner wants to discriminate against men, I fully support her right to do so. She will probably face legal challenges, and that is too bad in my opinion. I don’t think the government should interfere with businesses. No one is forced to patronize the coffee shop.

Likewise, I wish all proponents of fixing the wage gap would take up the issue in the private sector. But when you start advocating legal repercussions, you are limiting the freedom of others.

The media promotes certain types of discrimination. Discrimination is only okay when it corrects a historical wrong.

“Our” ancestors kept slaves, so affirmative action, all black schools, and white free zones are all now acceptable. Nevermind that my ancestors were in Italy and Scotland in 1865. In fact, likely the majority of white Americans descend from post Civil War immigrants. Not that it should matter anyway; since when are we responsible for the sins of our relatives?

Private organizations should absolutely be allowed to discriminate. I wouldn’t want to force a black tailor to sew the white robes for a KKK outfit. Nor do I wish to force a baker or a florist to provide services for a gay wedding if they don’t want to.

I still don’t understand why a gay couple would want to give their business to a florist or a baker who is anti-gay. Ironically the same people understand that boycotting Chick-Fil-A is the proper response if you don’t like the organizations to which they donate.

I want to know who doesn’t want my money so that I don’t fund the promotion of something with which I disagree. I am glad the cafe is vocal against their anti-man stance. Otherwise, I might accidentally spend my money there.

I want to know about “white free zones.” I will feel much safer staying far away from them.

Of course, we need to stay vigilant about the legal action taken against honest business owners. But the true solution is obviously only supporting businesses which match up with your values.

Another thought; is humor a good way to combat these media driven cultural memes? I think the tv show Portlandia does a pretty good job of that. Check out the video below, and let me know what you think.