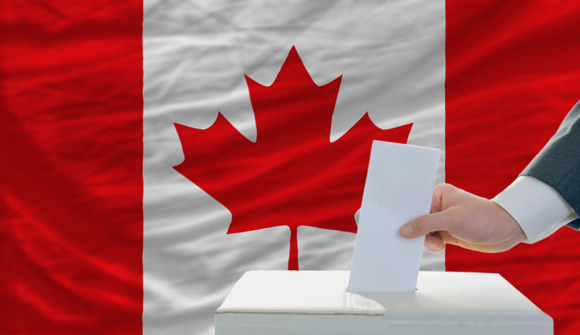 The Liberal Party steamrolled to a stunning political comeback Monday night, forming a new, majority government and creating Canada's first family dynasty at the highest level of national politics as an historic campaign ended with a dramatic bang. The Liberals had collapsed to just 34 seats and third place in the House of Commons in the 2011 election. But they were leading or elected in almost 190 constituencies by late evening, taking from both NDP and Conservatives and riding a wave of resentment toward Tory Prime Minister Stephen Harper. – National Post

Free-Market Analysis: Yesterday we published a news analysis entitled "Cannabis Could Win Big in Today's Canadian Election." Well, it certainly looks like it has, given that the liberals have taken a majority position in the House of Commons – and the leader of the Libs, Justin Trudeau, has been firm about legalizing cannabis.

Furthermore, Trudeau's majority government will not have to negotiate with the New Democrat Party, as polls running up to the election had indicated. NDP Leader Thomas Mulcair is also in favor of legalization, but now Trudeau apparently can chart his own path.

Conservatives are against both legalization and decriminalization but they are a weakened force. Their leader and the Prime Minister, Stephen Harper, just resigned. How important was the cannabis legalization mandate to the landslide Liberal victory that dwarfed even the most ambitious of Liberal supporters' dreams? We think very.

And so the way seems clear for cannabis legalization – maybe not right away but soon enough. As we pointed out yesterday, Trudeau has hundreds of millions of reasons to do it "sooner." That's because he has run on an ambitious and activist agenda and will need substantial additional revenue.

One surefire way to realize such revenue – and this has surely occurred to him – is to legalize marijuana and then tax it. An adult-use, legalized Canadian market is forecasted to be worth approximately US$10 billion or more annually, and the tax revenue on such a sum would obviously be substantial.

Of course, there are others anticipating significant profits from the probable legalization of cannabis. This includes various industry players and even investors who have staked out positions in the industry.

It would seem to be a proverbial "win-win" for all concerned, including cannabis users, but there are more complex issues swirling beneath the surface.

Chief among these is the way the industry will likely change as legalization becomes less fanciful and more concrete. Powerful lobbies and corporate strategists will focus their energies on wresting the best possible positions for themselves in order to leverage the most profits possible.

Regulations will change; participants will change; the rules that govern the industry will evolve in ways that no one can entirely predict. The industry is already seeing this, and not on a local level but an international one.

Just yesterday came word via mainstream media reports that billionaire entrepreneur Richard Branson leaked the text of an embargoed UN briefing paper calling on governments to halt the "war on drugs" and "decriminalize the use and possession of all illegal substances."

We reported this as an addendum to our lead article, pointing out that an Anthony Wile editorial from July 2014 entitled "As Predicted, UN Calls for Decriminalization of All Drugs" anticipated this latest move. Wile's editorial made a fairly definitive case for a broad legalization of drugs based on a report from the World Health Organization suggesting decriminalization.

Branson's document was even more authoritative, as it called on governments to take direct action and came out of the UN Office on Drugs and Crime. Yet by late afternoon the BBC was reporting that a "UN Attempt to Decriminalize Drugs [Was] Foiled." The BBC article read in part:

A paper from the UN Office on Drugs and Crime (UNODC) has been withdrawn after pressure from at least one country. The document, which was leaked, recommends that UN members consider "decriminalising drug and possession for personal consumption".

It argued "arrest and incarceration are disproportionate measures". The document was drawn up by Dr Monica Beg, chief of the HIV/AIDs section of the UNODC in Vienna. It was prepared for an international harm reduction conference currently being held in Kuala Lumpur. The UNODC oversees international drugs conventions and offers guidance on compliance.

The confusion over this UNODC document is symptomatic of the industry's larger flux. Competing forces in governments and private industry will position themselves for maximum advantage as the industry legalizes. Other groups – with much to lose from legalization – will fight hard against the legalization trend.

But as we have stated almost from the time we started analyzing the cannabis trend over two years ago as the bombshell news about Uruguay's cannabis legalization erupted around the world, this was and continues not to be a trend that is going away. There will be ups and downs – as just occurred – but when one looks at the larger picture, the momentum is obvious.

In 2016, the UN General Assembly Special Session on Drugs (UNGASS) is expected to embrace an entirely reconfigured international policy on drugs and the end of cannabis prohibition is at center stage. The reality of UNGASS is that it was moved forward from 2021 to 2016. Powerful forces want this issue discussed and resolved around the world – and not just as regards marijuana.

The cannabis industry is going to get more difficult to navigate as it grows bigger. However, here at The Daily Bell we're on top of the trend and often ahead of it. We've already forecasted some of its most important evolutions and we'll continue to do so.