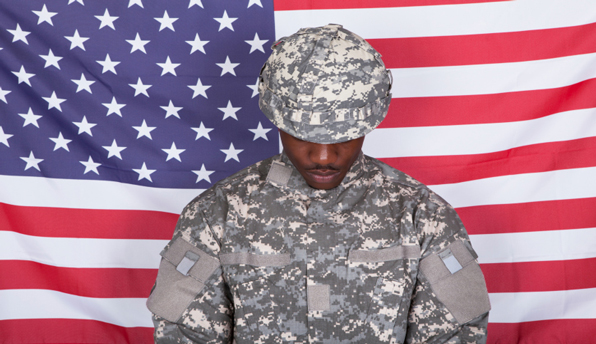 War is a grisly business, a horror of epic proportions.

In terms of human carnage alone, war’s devastation is staggering. For example, it is estimated that approximately 231 million people died worldwide during the wars of the 20th century. This figure does not take into account the walking wounded—both physically and psychologically—who “survive” war.

Many of those who have served in the military are among America’s walking wounded.

Despite the fact that the U.S. boasts more than 20 million veterans who have served in World War II through the present day, the plight of veterans today has become America’s badge of shame, with large numbers of veterans impoverished, unemployed, traumatized mentally and physically, struggling with depression, suicide, and marital stress, homeless, subjected to sub-par treatment at clinics and hospitals, and left to molder while their paperwork piles up within Veterans Administration offices.

According to a recent report by the Department of Veterans Affairs, at least 60,000 veterans died by suicide between 2008 and 2017.

On average, 6,000 veterans kill themselves every year, and the numbers are on the rise.

As Brené Brown, research professor at the University of Houston, observed, “For soldiers serving in Afghanistan and Iraq, coming home is more lethal than being in combat.”

Unfortunately, it’s the U.S. government that poses the greater threat to America’s military veterans, especially if they are among that portion of the population that exercises their First Amendment right to speak out against government wrongdoing.

Consider: we raise our young people on a steady diet of militarism and war, sell them on the idea that defending freedom abroad by serving in the military is their patriotic duty, then when they return home, bruised and battle-scarred and committed to defending their freedoms at home, we often treat them like criminals merely for exercising those rights they risked their lives to defend.

The government even has a name for its war on America’s veterans: Operation Vigilant Eagle.

As first reported by the Wall Street Journal, this Department of Homeland Security (DHS) program tracks military veterans returning from Iraq and Afghanistan and characterizes them as extremists and potential domestic terrorist threats because they may be “disgruntled, disillusioned or suffering from the psychological effects of war.”

Coupled with the DHS’ dual reports on Rightwing and Leftwing “Extremism,” which broadly define extremists as individuals, military veterans and groups “that are mainly antigovernment, rejecting federal authority in favor of state or local authority, or rejecting government authority entirely,” these tactics bode ill for anyone seen as opposing the government.

Yet the government is not merely targeting individuals who are voicing their discontent so much as it is taking aim at individuals trained in military warfare.

Don’t be fooled by the fact that the DHS has gone extremely quiet about Operation Vigilant Eagle.

Where there’s smoke, there’s bound to be fire.

And the government’s efforts to target military veterans whose views may be perceived as “anti-government” make clear that something is afoot.

In recent years, military servicemen and women have found themselves increasingly targeted for surveillance, censorship, threatened with incarceration or involuntary commitment, labeled as extremists and/or mentally ill, and stripped of their Second Amendment rights.

An important point to consider, however, is that under the guise of mental health treatment and with the complicity of government psychiatrists and law enforcement officials, these veterans are increasingly being portrayed as threats to national security.

In light of the government’s efforts to lay the groundwork to weaponize the public’s biomedical data and predict who might pose a threat to public safety based on mental health sensor data (a convenient means by which to penalize certain “unacceptable” social behaviors), encounters with the police could get even more deadly, especially if those involved have a mental illness or disability coupled with a military background.

That the government is using the charge of mental illness as the means by which to immobilize (and disarm) these veterans is diabolical. With one stroke of a magistrate’s pen, these veterans are being declared mentally ill, locked away against their will, and stripped of their constitutional rights.

If it were just being classified as “anti-government,” that would be one thing.

Unfortunately, anyone with a military background and training is also now being viewed as a heightened security threat by police who are trained to shoot first and ask questions later.

Feeding this perception of veterans as ticking time bombs in need of intervention, the Justice Department launched a pilot program in 2012 aimed at training SWAT teams to deal with confrontations involving highly trained and often heavily armed combat veterans.

Given the government’s increasing view of veterans as potential domestic terrorists, it makes one think twice about government programs encouraging veterans to include a veterans designation on their drivers’ licenses and ID cards.

Hailed by politicians as a way to “make it easier for military veterans to access discounts from retailers, restaurants, hotels and vendors across the state,” it will also make it that much easier for the government to identify and target veterans who dare to challenge the status quo.

After all, no one is spared in a police state.

Eventually, as I make clear in my book Battlefield America: The War on the American People, we all suffer the same fate.

Here’s a suggestion: if you really want to do something to show your respect and appreciation for the nation’s veterans, why not skip the parades and the flag-waving and instead go exercise your rights—the freedoms that those veterans swore to protect—by pushing back against the government’s tyranny.

It’s time the rest of the nation did its part to safeguard the freedoms we too often take for granted.

Freedom is not free.