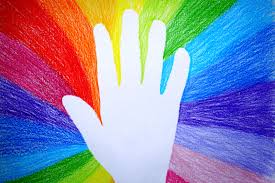 Speaking with a relatively high-profile (and heavily censored) gender realist on the left, she neatly summarized the thrust of her mission:

“I just want them to stop transing the children.”

What she meant is that if fully autonomous adults want to cosplay as the opposite gender – or even an invented gender – such is their prerogative in a free society.

It might fray the fabric of society; it might run counter to nature and eons of evolution; it might be a transparent ploy to fill a spiritual black hole; but it’s their right. People do stupid stuff every day.

It’s not in our purview to play the role of crossdressers’ therapists, or their priests.

The role society should play, though, is protectors of children from threats to their mental and physical well-being – including becoming sexualized pawns to be sacrificed at the altar of the Church of Neoliberalism© at earlier and earlier ages. 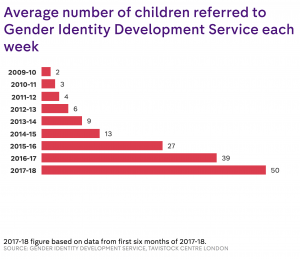 “Teens are identifying as transgender in record numbers. In 2017, 3-4 in 100 teens in the United States reported that they are or may be transgender. A more recent 2021 study suggests that the rate of transgender identification among America’s youth may be as high as 9 in 100. All of the major gender centers in the world have reported a several-thousand-percent increase in youth presenting with gender distress.

How do we reconcile these numbers with 2013 data reporting the prevalence of adult gender dysphoria to be a rare 2-14 in 100,000. Reflection is warranted.”

‘Transgender’ teen rates go up and up and up. Seemingly, the sky is the limit.

And, as we’ll see coming up, the “trans” activists have now set their sights on preschool-age children.

Exhibit A in favor of the latter hypothesis:

“The phenomenon of transgender children ‘growing out of’ their transgender identity by the time they are adolescents or adults is called ‘desistance’ by gender researchers.
For decades, follow-up studies of transgender kids have shown that a substantial majority — anywhere from 65 to 94 percent — eventually ceased to identify as transgender.”

As many a 94% of “transgender” kids naturally grow out of their claimed “transgenderism” later in life. Which begs the question: what portion of these kids “transition” in the first place at the behest of their super-tolerant Neoliberal Church© mothers?

‘My toddler came out as trans at age 4. He’s so much happier now.’

“I decided to follow my gut and give my child what I knew was needed — pictures of little-boy haircuts. ‘Yes! Yes, that one!’ The joy and validation were evident on his face.” 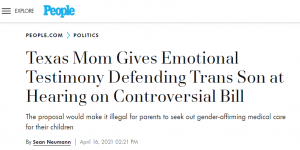 “A Texas mom said she was taking a major risk by standing up for her son during a state Senate hearing this week on a new proposal that would bar gender-affirming medical care for children who are transgender.

Briggle’s son, Max, came out to her as transgender when he was 4 years old*, she told lawmakers during a passionate plea for the state to not pass proposals that she said would block needed health care for transgender kids*.”

4 years old! Amber Briggle’s preschool-age daughter would struggle to count her age on her fingers, but somehow she can make permanent decisions about gender identity.

*“Block needed health care for transgender kids”? That sounds terrible! What does that mean?

Amber’s daughter who decided she was a boy at 4 years old won’t get a needed heart operation? She has bacterial meningitis but is denied access to antibiotics? She fell, broke her wrist, and the evil Texas authorities cast her out of the orthopedist’s office to let it regrow mangled?

“Treatments that would be banned under the new law include puberty-suppression prescription drugs, medical procedures and cross-sex hormone therapy.”

The long-term health effects of hormone blockers, via Stat News:

“For years, Sharissa Derricott, 30, had no idea why her body seemed to be failing. At 21, a surgeon replaced her deteriorated jaw joint. She’s been diagnosed with degenerative disc disease and fibromyalgia, a chronic pain condition. Her teeth are shedding enamel and cracking.

None of it made sense to her until she discovered a community of women online who describe similar symptoms… All had taken a drug called Lupron.

Thousands of parents chose to inject their daughters with the drug, which was approved to shut down puberty in young girls…

More than 10,000 adverse event reports filed with the FDA reflect the experiences of women who’ve taken Lupron. The reports describe everything from brittle bones to faulty joints.” 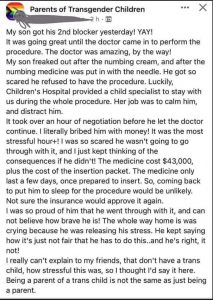 Of course, monstrous perversions perpetrated on defenseless children are reframed in corporate media as loving, diverse, tolerant diversity or whatever.

In many respects (not limited to the issue of child transgenderism), we in the West become victims of our own laissez-faire permissiveness. Give the social justice left an inch, and they’ll take a mile.

The sexualization of children is a bridge too far — even for a Western civilization which, as anyone who has lived in the Third World knows, is uniquely lenient in terms of accommodating divergent, non-mainstream views and lifestyles.

We don’t need to cross that Rubicon.