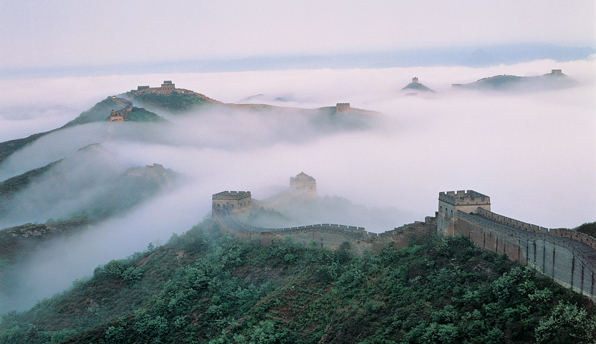 Looming property default in China raises fears of broader crisis … Nomura said the number of ghost towns has spread beyond the well-known disaster stories of Ordos and Wenzhou to at least eight other sites … China faces the biggest property default on record as credit curbs threaten to break the housing boom, leaving a string of "ghost towns" across the country. The Chinese newspaper Economic Daily News said Xingrun Properties, in the coastal city of Ningbo, is on the brink of collapse with debts of $570m, mostly owed to banks. The local government has set up a working group to contain the crisis. "As far as we know, this is the largest property developer in recent years at risk of bankruptcy," said Zhiwei Zhang, from Nomura. – UK Telegraph

Dominant Social Theme: China can never have economic problems because it is too big.

Free-Market Analysis: For years we've been aware of the tendency of many in the investment world to fool themselves about China. But not anymore.

More and more articles are being written that recognize what's actually occurring in this great country – which must amount inevitably to a broad swath of defaults beginning with real estate.

We've been in the forefront of analyzing China's inevitable decline, publishing a number of articles over the past several years describing China's "ghost cities" as well as the profligacy of its central banking policies.

We've even made the point that much of China's "capitalist" façade is just that – a thin veneer of seeming competition that hides the government's vast control over important economic levers.

GE Nomura said the number of ghost towns has spread beyond the well-known disaster stories of Ordos and Wenzhou to at least eight other sites. Three developers have abandoned half-built projects in the 2.5m-strong city of Yingkou, on the Liaodong peninsular. They have fled the area, a pattern replicated in Jizhou and Tongchuan.

Yu Xuejun, the Jiangsu banking regulator, said developers are running out of cash. This risks undermining land sales needed to fund local government entities. "Credit defaults will definitely happen. It's just a matter of timing, scale and how big the impact is," he said.

… There have long been warnings of a property bust in China. These reached fever-pitch in mid-2012 when a bout of monetary tightening caused house prices to fall briefly. Prices have since roared back in the tier 1 cites such as Shanghai and Beijing but while these places capture the headlines, they account for just 5pc of total building in China.

Prices are falling in 43pc of the tier 3 and 4 cities. Unsold housing stock in China Optimists hope that the country's urbanisation drive will stoke demand for years to come, but this too is in doubt.

… The mounting stress in the property sector is a test of President Xi Jinping's vow to impose market discipline, however painful. Beijing allowed the solar group Chaori to default earlier this month, the first failure on China's domestic bond market.

The authorities are trying to wean the economy off excess credit after a $16 trillion spike in loans since 2009 – equal in size to the entire US banking system – but lending curbs are beginning to expose the sheer scale of bad debt in the system. "It will not be an easy clean-up," said Diana Choyleva, from Lombard Street Research.

Investors may soon start to ask whether China is quietly devaluing the yuan to cushion the shock of debt deflation. Premier li Keqiang warned last week that economy will be allowed to slow further and told industry leaders to brace for defaults … Any such move would amount to a beggar-thy-neighbour policy, exporting excess capacity and deflation to the rest of the world. Europe is the region most nakedly exposed.

What we learn in this article is important on two fronts. First of all, the current Chinese government seems determined to damp price inflation and real estate speculation. Presumably they have no choice in this regard, as otherwise China's superhot economy will grow ever hotter.

Second, and more controversially, China may utilize the yuan to cushion various "shocks to the system" as Chinese officials try to drain the economy's speculative froth.

What the article is actually indicating here is that China will engage in a "soft devaluation" – one that won't include a formal announcement but that will nonetheless reduce the yuan's value relative to the dollar.

This is sure to cause tension, as US officials have pressed China to raise the yuan against the dollar for several years now. But with China's growth lagging and with an economy unbalanced by years of increasingly unproductive speculation, China's top economic officials presumably believe they have little choice in the matter.

Of course, despite China's troubles, the economy has considerable strengths. Chinese citizens and banking officials have been buying up much of the world's gold supply of late. And the Chinese still hold absolutely huge foreign reserves.

But any downturn is likely to hit the Chinese middle class hard, as they are the most exposed to real estate volatility and potential defaults. The result could open the door for various kinds of civil unrest.

From a Western standpoint, China's economic downturn – if that's what takes place – will only expose Europe to even more economic headwinds. Europe is already exposed as regards the Ukraine matter because it depends on Russia for natural gas shipments.

However, if Europe can gain access to other oil and gas supplies, then Russian leverage may be diminished. At the same time, European and US sanctions may cause more damage than now appears likely.

In such a case, Russia might be more the economic loser than Europe. And, as we have pointed out before, the US may be a big winner from an investment standpoint – given its ongoing "safe haven" status.

There are suddenly many uncertainties on the world's horizon. Yet, presumably, Western calculations have encompassed much of what can occur.

As Keynes once said, "In the long run, we're all dead." In the short term, let us note that Western markets rallied yesterday. As for the rest, we'll have to wait …