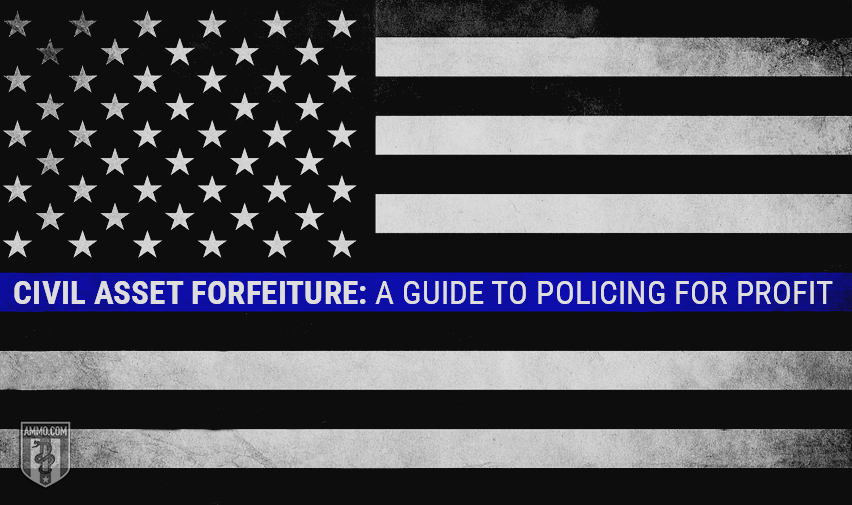 Picture this: You’re driving home from the casino and you’ve absolutely cleaned up – to the tune of $50,000. You see a police car pull up behind you, but you can’t figure out why. Not only have you not broken any laws, you’re not even speeding. But the police officer doesn’t appear to be interested in charging you with a crime. Instead, he takes your gambling winnings, warns you not to say anything to anyone unless you want to be charged as a drug kingpin, then drives off into the sunset.

This actually happened to Tan Nguyen, and his story is far from unique. It’s called civil asset forfeiture and it’s a multi-billion dollar piggybank for state, local and federal police departments to fund all sorts of pet projects.

With its origins in the British fight against piracy on the open seas, civil asset forfeiture is nothing new. During Prohibition, police officers often seized goods, cash and equipment from bootleggers in a similar manner to today. However, contemporary civil asset forfeiture begins right where you’d think that it would: The War on Drugs.

In 1986, as First Lady Nancy Reagan encouraged America’s youth to “Just Say No,” the Justice Department started the Asset Forfeiture Fund. This sparked a boom in civil asset forfeiture that’s now become self-reinforcing, as the criminalization of American life and asset forfeiture have continued to feed each other.

In sum, asset forfeiture creates a motivation to draft more laws by the legislature, while more laws create greater opportunities for seizure by law enforcement. This perverse incentive structure is having devastating consequences: In 2014 alone, law enforcement took more stuff from American citizens than burglars did.

The current state of civil asset forfeiture in the United States is one of almost naked tyranny. Don’t believe us?

The Origins of Civil Asset Forfeiture

Civil asset forfeiture has a deep history in maritime law. In many cases, it just wasn’t practical to bring owners of vessels carrying contraband in front of an American court. So customs enforcement would simply seize the contraband. But in practice, seizure of assets was rare and generally required a felony conviction in court. Often times these convictions were obtained in absentia, but the point is that there was a criminal proceeding and due process.

During the Civil War, as part of sweeping attacks on liberty that included Lincoln suspending habeas corpus and obtaining an arrest warrant for the Chief Justice of the Supreme Court, supporters of the Confederacy had their property confiscated without due process. Civil asset forfeiture was used during the Prohibition Era to seize assets from bootleggers and suspected bootleggers. Even innocent owners had no defense during Prohibition if their property was used in violation of the Volstead Act.

In 1984, civil asset forfeiture entered a new phase. The Comprehensive Crime Control Act, championed by then-President Ronald Reagan, allowed for police agencies to keep the assets they seized. This highly incentivized the seizure of assets for the purpose of funding police departments rather than pursuing criminal charges. However, the game changed completely in 1996 – the year of the landmark Supreme Court decision Bennis v. Michigan(516 U.S. 442). This ruling held that the innocent owner defense was not sufficient to recover assets seized during civil asset forfeiture.

The plaintiff, Tina Bennis, was the joint owner of a vehicle with her husband John. The latter was arrested by Detroit police when caught with a prostitute on a street in Detroit, and the car was seized as a public nuisance. The court found that despite having no knowledge of the crime, there was no violation of either her property rights or her right to due process. Michigan’s law was specifically designed to deter people from using their assets in criminal activity, which the Supreme Court found to be Constitutional in a 5-4 decision. The Supreme Court likewise found that there was no right to compensation for Bennis.

Civil asset forfeiture is a lawsuit against the seized object in question rather than a person. This leads to rather strange lawsuits like “Texas vs. One Gold Crucifix.” The legal burden of proof varies from one state to another, but the most common is preponderance of evidence, notreasonable doubt. What this means is juries decide if the state’s case is more likely to be true than not – not beyond a reasonable doubt. In a civil asset forfeiture trial, courts can weigh the use of the Fifth Amendment. This is not true in criminal trials.

The burden of proof question becomes crucial when it comes to retrieving property. In criminal cases, assets are returned if the prosecution fails to prove the guilt of the accused. In a civil asset forfeiture trial, the accused effectively has to prove their innocence to get their property back. Thus, civil asset forfeiture is a highly attractive option for police departments looking to scare up extra scratch in tight budgetary times. What’s more, the accused is not entitled to legal counsel. This is why, in most cases, it’s not economically advantageous to try and get one’s property back. The lawyer fees will quickly eclipse whatever value the seized assets have.