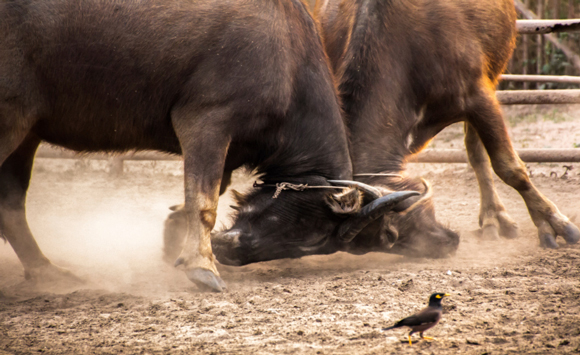 Dominant Social Theme: It's bad on the savings front but it could be worse.

Free-Market Analysis: This poll presents a stark statement regarding people's ability to save for the future. And actually, we believe it's much worse than it appears, given the poll's leading conclusion that 36% haven't saved anything.

What about the rest? Have they saved more? How much more?

The real question to ask is whether US citizens have saved enough to "retire" on. How many have? The poll – and the CBS journos – certainly try to put the best face on it. The headline is a "downer" but the rest of the article is relentlessly chirpy.

"Regardless of age, there is no better time than the present to start saving for retirement," says Bankrate.com chief financial analyst Greg McBride, CFA. "The key to a successful retirement is to save early and aggressively, but even those on the cusp of their golden years should have some money allocated toward equities as opposed to all cash and bonds."

• Job security, net worth and overall financial situation are all areas in which Americans note improvement over one year ago.

• However, there are twice as many Americans less comfortable with their savings (compared to one year ago) as those that are more comfortable.

One wants to rub one's eyes at this point to see if one is dreaming. The nostrums being trotted out here are the same ones that were so popular in the 20th century when no one ever bothered to define what money was and who controlled it. That's changed, thanks to the Internet.

The article doesn't seem to notice, though. We're advised to "start saving early" and to "allocate money toward equities."

The European system, we have read, is much better than the US system when it comes to providing retirement benefits as those benefits are guaranteed by the state. But try telling that to the Greeks or the Spanish.

The system is generally set up on a "trust me" basis. One either trusts the European leviathan or, well … Wall Street.

Increasingly, people don't believe. For a dose of how the dialogue has changed, just look at some of the responses to this "poll" in the feedback:

• How the hell are we supposed to save when none of us have jobs? I've got a bachelor's degree from a high end private university, and I'm a veteran, but I've never been able to make a comfortable living wage in my life. Now I'm unemployed for 3 years. Meanwhile the Chinese have all our manufacturing. The Indians have all our tech support. All the corporations are keeping their money offshore, and the only jobs left are service industry jobs held by young minorities that don't pay a living wage and have no future for anyone over …

• Saving used to make sense. Now all you're doing is taking the valuable time of your life and putting into the future for some socialist to seize. Enjoy your time and money NOW – You will not be able to after the looting is over . . . . We all live in Ferguson now …

• Progressive are stupid sheep. They fell for the lie that the government would take care of them. They will all starve to death when things go south… and rightfully so …

• Why save any money? Just tax the middle class more and they can take care of everybody …

• Let them work until they die …

• I had a decent sized retirement account going until Obama got elected. Then my wife lost work and fuel prices have been kept high on purpose (the administration stated goal to make energy costs high to force people into making greener choices.) Then my insurance went up $1800 more a year because of Obama care. This failed administration reminds me more and more of the Carter "Malaise" years. I have never made so much money and yet been so poor …

• Look at any 401k or mutual fund prospectus carefully…the era of bankers actually sharing profits with their customers is over. 10 year returns have not outpaced the cost of the Big Mac. If you save for retirement, you're an idiot loaning your disposable income to Wall Street at negative interest, only to be completely wiped out by federal government money printing. Sure you'll be worth $5 mil by the time you're 68! Great! Sounds like a lot of money! Only the real inflation rate is hovering around 6%. Say it stays that low for the next 35 years (unlikely). The Big Mac that costs $4.80 today will cost $36.89. That $5 million? Will be worth $650k in today's money you will get, in exchange for the real value you contributed would be around $900k. That's 13 years of a meager 50k/yr retirement. Oh wait! You still need to pay taxes, so that is pauperly 36k/yr retirement. Oh wait! Inflation is STILL eating away at your earnings year after year, can't forget that! That last year you'll be making $24.8k in today's money, meaning you'll be spending your last year of retirement living in a hovel slurping down ramen and hot dogs. And at this point, you're only 81 years old! You'll have at least 10 years left on average! Basically the era of wealth and prosperity we enjoyed in the 20th century is over. The sociopaths and socialists have won, and they and their cronies are busy enjoying all of the prosperity for us. The only retirement plan you can count on is doing it the old fashioned way…by having enough children that at least one will be able to take care of you as you age …

You see? The monetary sophistication is startling given that these are presumably comments from a non-professional "investment" crowd.

It makes the "Wall Street Party" strategy more understandable. Power elites poll compulsively. They must know that in this Internet era they've lost the "hearts and minds" of those they sought to influence. Too many are without work and just as many are beginning to question fundamental issues about what an economy is and how societies are to be structured.

The solution apparently is to be a 30,000 Dow and then a blow-off that will literally crush the wealth of billions. This is apparently to be accompanied by various military actions of the sort that are now taking place in Africa and the Middle East, and that will no doubt spread.

But people these days are likely as attuned to the war machine as they are to the "investment" one. There is surely a question as to whether social control can be maintained when those being controlled are aware of their manipulation and the tools being used.

This is the real struggle to watch: The collision of the Internet Reformation with the command-and-control strategies of globalist elites.

We're not trying to pick sides. You can do that. We're analyzing the mechanism.