25 years ago, Somalia’s central government collapsed under the communist leader Siad Barre. The world watched as the country was plunged into widespread discord. Famine, hyperinflation, civil war, political violence, terrorism, and piracy are just a few of the horrors which emerged after the chaos.

When Americans imagine Somalia, they think of Black Hawk Down. This simplistic image isn’t helpful when it comes to understanding and addressing the human tragedies in Somalia.

Somalia is an African country on the Indian Ocean, across from Yemen. 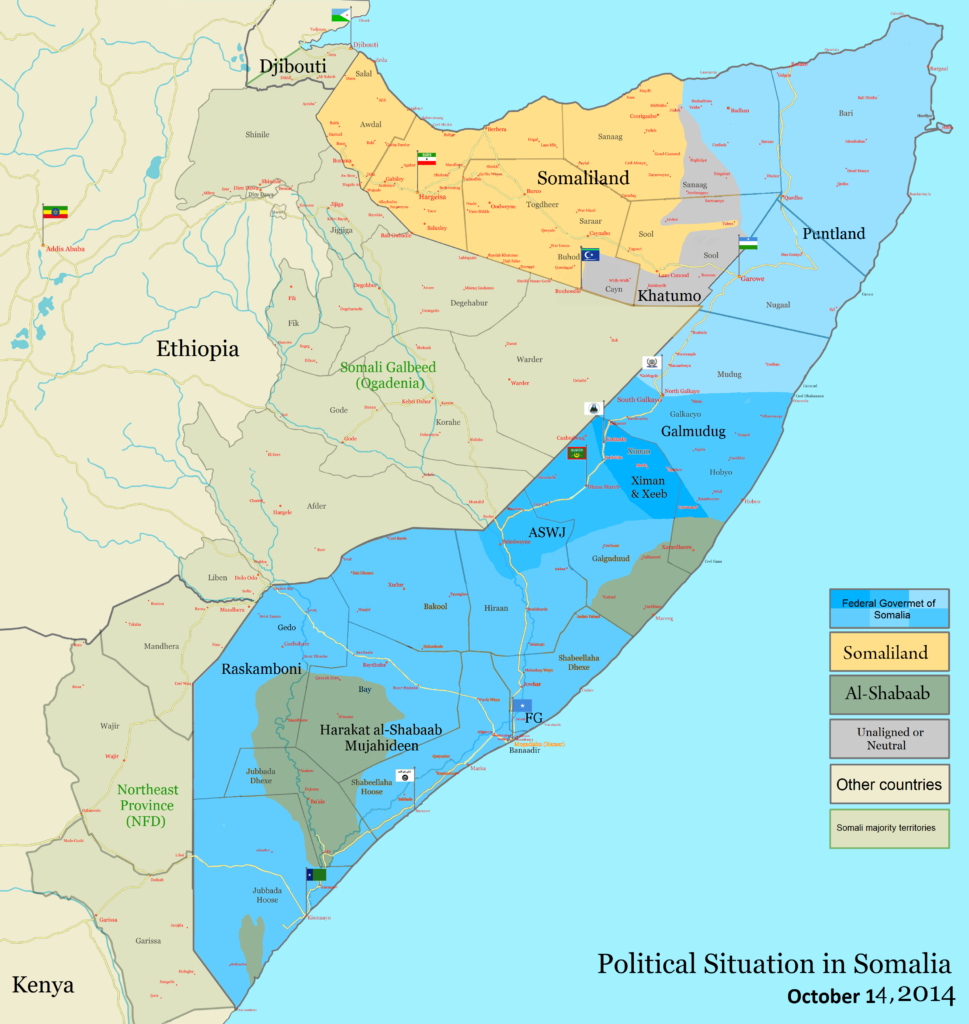 Unlike the rest of Somalia, which is plagued by bloodshed, Somaliland remains relatively stable.

Understanding the situation on the ground is hard because there are few Western observers and no reliable economic statistics. There is, however, a dramatic difference in stability between Hargeisa and Mogadishu.

This can be seen on UCDP’s map of violent deaths. Southern Somalia has nearly four times as many deaths as Somaliland despite having a slightly smaller population. In 2015, there were a total of three civilian deaths by terrorism in Somaliland compared to 39 in Somalia.

When the Barre regime collapsed, members of the Somali National Movement declared independence for the Republic of Somaliland. Hargeisa, the capital city, has a population of almost a million. It maintains diplomatic relations with many different organizations and countries. Somaliland even has its own currency, a parliament, and a professional military.

In addition, Somaliland has a more developed telecommunication infrastructure. In 2008 a major telecom company from Dubai invested $35 million into the telecom infrastructure of Hargeisa.

Despite this, Somaliland is not officially recognized as a sovereign state by any country.

The Transitional Federal Government based in Mogadishu stands opposed to Somaliland. They wish to have a unified Somalia under one central authority.

Mogadishu is still struggling to maintain stability despite extensive support from the African Union, Europe, and the Americas. Until recently, most efforts to curb instability had failed. Current attempts have only managed to create a fragile peace.

How could Somaliland, a backwards unrecognized self-declared state, have less instability than the central government which has foreign military, financial, and diplomatic support from the rest of the world?

The Xeer System and Colonialism

Prior to independence in 1960, Somalia was divided between British rule in the northwest (present day Somaliland) and Italian rule in the rest of modern day Somalia. Before European colonization in the late 1800’s, Somali society was stateless under a polycentric legal system called Xeer.

Xeer was formed as early as the 7th century. Under the Xeer elders act as judges to settle disputes within their clan. They also have procedures to resolve disputes involving other clans. Under Xeer, most punishment entails restitution.

This meant that there was no central monopoly on power or law in Somali society. Because Somalia is a clan based society, Xeer also allowed clans to rule themselves while facilitating dispute resolution. This led to peaceful and stable relations between the clans.

When colonial powers came to Somalia they disrupted the traditional Xeer system and caused massive unrest.

Different colonial powers held opposing views on this indigenous legal system. The British were lenient and the Italians were harsh. Although British authorities officially did not support it, they allowed certain aspects of it to be used as their primary motivation was extracting wealth. The Italian government, on the other hand, did as much as they could to eradicate it.

Xeer is still practiced throughout all of present-day Somalia but is most intact in the former British Somaliland Protectorate, which is now Somaliland. In the formerly Italian Protectorate, Xeer hasn’t survived and its disappearance has led to increased instability between the clans.

When both of the territories gained independence, they merged into one country. This key fact is one of the biggest arguments for those in support of Somaliland. They argue that there is no basis for a unified Somalia. Historically, Somalia was never unified. If one looks farther back even prior to European colonialism “Somalia” was mostly stateless for its history. The cultural groups and clan boundaries also had a North-South divide.

Largely, Somalia was never ruled by a single central authority or government. Centralized government is a foreign, colonial idea which isn’t shared by many of the indigenous Somalis.

One of the main reasons Siad Barre’s communist regime failed in the 1990s was because he centralized power into the hands of his family’s clan and mistreated rivals, including the Somaliland based Isaaq clan. The following Transitional Federal Government has also faced many of the same problems as a centralized authority.

Somali society is clan-based, meaning that most Somalis have more loyalty to their clans than the central authorities. For the majority of its history, there was no such thing as “Somalia.” Each clan ruled itself.

Members of the Isaaq clan largely inhabit Somaliland, which was one of the several clans that faced extreme persecution from the Barre regime. Siad Barre’s government imprisoned Isaaq elders, raped women, and killed civilians in massacres in order to quell resistance to his rule. In Somaliland, the traditional Xeer system is still widely practiced by the population. The self-declared government of Somaliland has incorporated aspects of the Xeer in its legal system in order to promote stability.

Somaliland has a House of Elders made up of 82 members representing traditional elders from the different clans. They are primarily responsible for resolving and preventing disputes from turning violent. Somaliland’s government is a hybrid of traditional Xeer with western democratic institutions such as a bicameral parliament and an elected Prime Minister.

Somalia is still one of the poorest countries today. Once again, the country is on the verge of civil war as Islamic militias threaten the government in Mogadishu. Furthermore, the political tensions between Hargeisa and Mogadishu continue to grow.

If the international community keeps repeating its past mistakes, the lives of 10.5 million Somalis might soon be at stake.