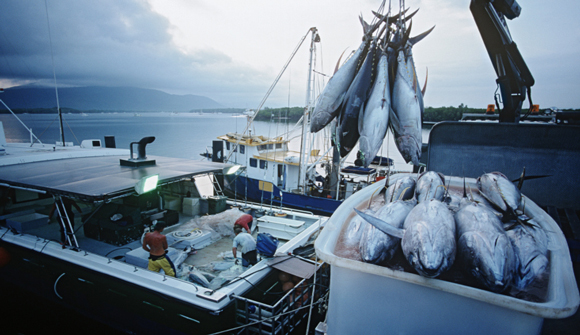 Oceans running out of fish as undeclared catches add a third to official figures … The global catch of fish and seafood is falling at three times the rate reported by the United Nations and urgently needs to be slowed to avoid a crash, reports Christopher Pala. The finding comes in a new study for Nature which quantifies the huge illegal industrial fish pillaging taking place around the world, together with artisanal catches, which in 2010 added over 50% to UN estimates. We have ways of knowing whether a fish has been caught sustainably. – TheEcologist.org

Dominant Social Theme: If people don’t get upset about over-fishing, then there won’t be any more fish.

Free-Market Analysis: TheEcologist.com is the big fish of the “green” movement, which grew out of the organization’s early activism and writings. Now transferred to the web, The Ecologist magazine is taking on a new challenge, which is to create “a movement for ethical fish,” that will reduce the depredations of international fishing.

Now we need to start a movement for ethical fish that considers the impact of fishing not just on the fishes and the ecosystem, but also on the people who depend on them for survival. Despite steady gains in efficiency and hefty subsidies, the world’s international fleets of industrial fishing vessels are seeing their catch diminish much faster than previously thought.

And this is happening for a simple reason: because the oceans are running out of fish. This is the core finding of a major study published today in Nature Communications. If the current rate of fishing continues, warns the study’s leader, Professor Daniel Pauly of the University of British Columbia, consumers in rich countries will soon face fewer choices of wild fish and coastal residents of poor countries will see their supply of affordable animal protein dwindle.

So far we are in predictable territory. The article seems filled with the usual doom and gloom that one might expect from a green publication. And the call to action is predictable as well …

“Non-profit organizations should create … an ethical seafood label,” we are advised. A movement for “ethical fish” would take into account whether the fish were being caught by companies that were conscious of the larger sustainability of the industry and ecosystem.

The article is built around a long-term Pew study that found “the global catch has been 32% higher than the catch that countries reported.” This is not surprising of course, though it does seem to come as a shock to TheEcologist.org.

Most of the unreported catch … “was due to a network of secret wholesalers and processor the authorities uncovered in 2005” – a state of affairs called “amazing” given the presence of “a well regulated” fishing industry.

What a world we live in: Once again wide-eyed amazement that regulation is not a panacea. Surprise, surprise. Presumably if regulators regulate better, much of the problem can be resolved.

And yet … here the article begins to change direction and becomes less predictable. After declaring that there ought to be a movement for “ethical fish,” we begin to encounter some unexpected suggestions, as follows:

Solution: end subsidies to big fishing companies. The most effective solution to the global problem … is to eliminate the so-called bad subsidies for fuel and for building new vessels or making existing ones ever more efficient – about $20 billion a year that serve to increase the fishing pressure on a fast-decreasing resource. These go overwhelmingly to large, well-connected companies and ships.

Good for TheEcologist.org! Why should governments of Europe and Japan subsidize their largest fishing corporations? The subsidies, in fact, seem to make the very largest depredations possible.

The global fish catch is worth about $80 billion, we learn, and the subsidies amount to $20 billion, or 25% of income.” Get rid of subsidies and the largest companies would have to take home a 25% profit. Many might go out of business instead.

Seen in this light, a movement for “ethical fish” has at least some connection to reality. Get rid of government funding and some of the worst abuses and abusers might diminish.

The idea of removing government in order to fix a problem might be seen as unusual. Most mainstream solutions, unfortunately, usually involve MORE government not less. But it is surely the invisible hand of competition that holds the key to resolving scarcity issues of all kinds.

Usually we find laissez faire solutions to scarcity dilemmas being offered by the libertarian media, and a quick search of the Internet quickly locates one such from 2014, entitled “How Libertarianism Can Save The Whales And Prevent Overfishing.”

The article is posted at “Simple Facts and Plain Arguments” and suggests a simple, free-market solution.

One common question I hear being asked is, “What can be done to prevent overfishing in a pure libertarian society?” The question deals with over-consumption, and can be answered much in the same way as “what about the trees” and “who will protect animals?”

The answer is, as usual: property rights and the non-aggression principle. Using GPS and latitude/longitude, let people parcel out and own a piece of the ocean like they would own a piece of land. Or, let people claim/buy the fishing/mining/whatever rights for a certain parcel of ocean. The point is: private property.

This is certainly a reasonable enough idea in some ways. People tend to take care of their own property and want that property to advance in value. Thus, people and companies with sea-based property rights might well be incentivized to do what is necessary – individually or as a group – to build value. Presumably, this would include ensuring plentiful stocks of fish.

Indeed, creating private property in the ocean might be seen as a significant step forward from a libertarian perspective. But in a sense it is an artificial solution because someone would have to “organize” such an evolution.

Perhaps there is a simpler solution and one we have often suggested in these modest pages.

Begin with the notion that most social and economic problems are generated by an unholy alliance of big business and government. Large corporations – often abusive – are created and supported by a variety of modern judicial decisions. There are three main ones: monopoly fiat money issued by central banks, corporate personhood privileges and monopoly intellectual property rights.

Get rid of these three judicially sustained supports and Western society would gradually subside back into more human-sized economic environments.

A society where bigness was not enforced by government power would be slower-paced and less consumer driven. It would also be less prone to various forms of depredation including the current warfare/welfare state paradigm, which would have a hard time maintaining its existence.

For one reason or another modern societies are stuffed like turkeys with bigness everywhere. On closer inspection, the bigness is not sustainable without the barrel of a gun. The trouble is that bigness is in the air we breathe and thus we believe it is a natural outgrowth of modernity. It’s “part of progress,” though it is not.

This is yet another reason to organize one’s personal life about modest goals and local involvement. Do what you can to ensure your own survival and prosperity at a local level and then attempt to provide similar solutions to your surrounding community.

Conclusion: Leave world-spanning solutions to others. Concentrate on controlling your own destiny. Tend to your own garden.