New congressional reporting released on July 22 shows that 147 out of 435 members of the U.S. House of Representatives are lawyers. Nearly half of the U.S. Senate is likewise made of lawyers.

The vast majority of remaining seats are occupied by professionals from the “business sector.” What few positions are left to claim are typically handed to former Congressional staffers – “keeping it in the family,” so to speak.

Much media attention, rightly or wrongly, is paid to the gender and racial disparities that persist in the US legislature. There are other measurable markers, though – some arguably more relevant than gender or race – that betray the total lack of representation for the average American in the government.

The report paints a comprehensive image of who sits in the seat of elected power, what worldview they likely bring to the job, and, ultimately, what corresponding legislative agenda they will transform into public policy.

Unsurprisingly, the membership of Congress poorly resembles the population of Main Street USA. The chasm between the governing and the governed seems to grow by the year.

96% of Congress has a college education. In contrast, only 34% of the total US adult population has completed higher education. The average age of a US Senator is almost 63 years — while more than half of Americans are under 39 years old. 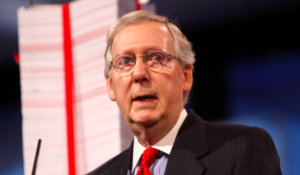 Most indicative of all, as documented separately from the above-referenced report, more than half of Congressional members are millionaires. They invariably leave “public service” (if they ever do) substantially wealthier than when they arrived. 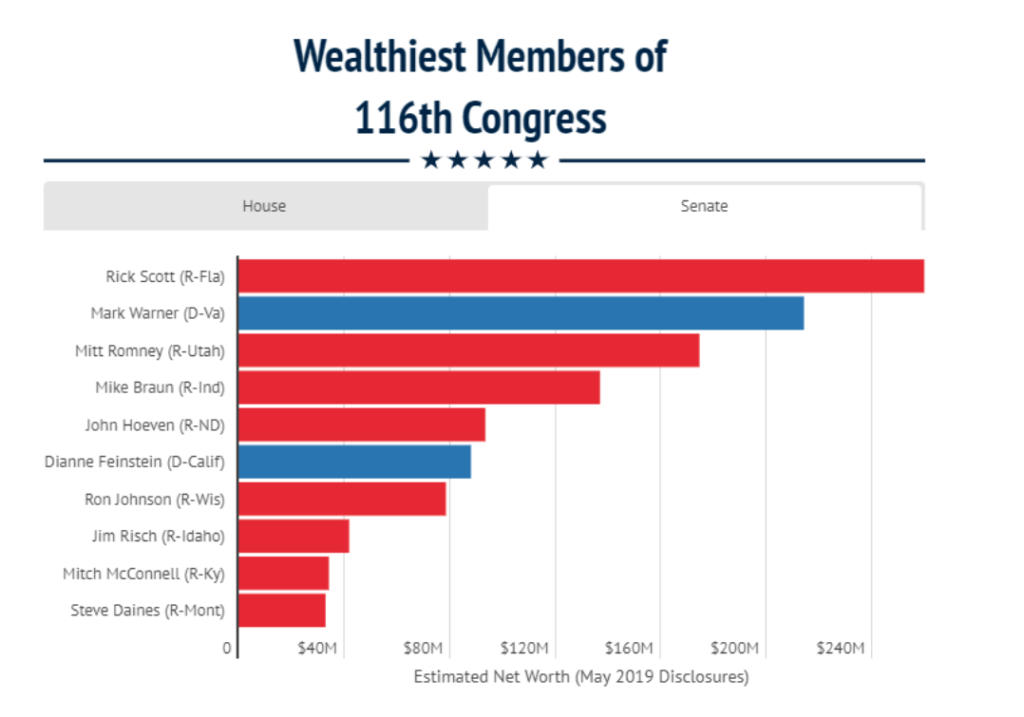 More than being just “well-off,” several members with tens of millions in accumulated net worth qualify as economically elite. The spoils of the federal gravy train, as evidenced in the chart above, is distributed throughout the DC swamp in bipartisan fashion.

Since the days of economic optimism in the post-World War II era, American wealth has been slowly but steadily extracted from the working class for upward transfer to the ruling elites.

Worker productivity continues to climb while wages remain stagnant. The most jarring figure on the unfolding economic meltdown comes via the Federal Reserve:  40% of Americans can’t access $400 to cover emergency expenses.

The economic circumstances for the average American, while more materially comfortable, are now virtually indistinguishable from that of a 19th-century Russian serf in this regard:  he or she is tied to dead-end work by decree of the nobility with little hope of a middle-class future.

This is the economic stuff of the Third World, but the reality of mass destitution now lives right here in American neighborhoods.

Los Angeles and New York – the two most populous cities in the United States and exhibitions of some of the most extravagant wealth anywhere on the globe — now rank #2 and #4 in homelessness worldwide, respectively, right alongside Third World behemoths like Mumbai, India and Manila, Philippines.

How did this happen?

One of the most fundamental concepts in interpersonal psychology is that people identify and empathize with others who share similar traits.

It should come as no surprise, then, that Congress does not prioritize the well-being of the average American – they share no perceived common interests. A 2014 scientific, systematic survey of American political institutions by academics at Princeton University found that the US now functions as an inversion of democracy wherein public opinion matters not at all while the elite dictate policy.

“Multivariate analysis indicates that economic elites and organised groups representing business interests have substantial independent impacts on US government policy, while average citizens and mass-based interest groups have little or no independent influence.”

Essentially, it is now a matter of settled social science that, in America in 2020, the unelected and widely despised likes of George Soros, Jeff Bezos, and Bill Gates write US law. Average Americans now rely on the non-existent benevolence and wisdom of unelected, sociopathic oligarchs for economic provision. It’s a recipe for disaster.

Given the results so far, is there any justification for the dominance of the legal and business sectors in nationally elected leadership?

In an age where non-partisan, populist libertarianism is needed more than ever, such leaders rarely emerge out of the ranks of the attorney and business classes. Insincere opponents of “class warfare” will surely disagree, but true representation is impossible without representatives on the same rung of the socioeconomic ladder as their constituents.

The majority of members of Congress are millionaires; everyone they play golf with is a millionaire; they all take money from billionaires each election cycle as a matter of political survival.

While the American economy decays from coast to coast, the DC suburbs are thriving like never before. Per capita, 9 out of the 20 wealthiest counties in the US are now located there. The swamp is a gold mine for the creatures that populate it.

One need not object to the concept of becoming a financially secure millionaire to object to the increasing concentration of wealth at the very top of society – driven in large part by the legislative and enforcement agendas set forth by the lawyer-centric roster of nationally elected leadership.

The gutting of democratic institutions did not happen overnight. Lawyers working on behalf of the ruling class incrementally hijacked the entire campaign financing system to give a permanent electoral advantage to the candidates that collect the most bribes from their corporate sponsors.

90% of the time, the Congressional candidates with more campaign cash win. 93% of House of Representatives incumbents return to power in the next election cycle. They often serve decades in power, accumulating riches and personal celebrity for themselves as compensation for orchestrating the systematic transfer of wealth to the top of the pyramid.

They do it through sweetheart tax deals for huge corporations, private-public business “partnerships,” military adventurism, union busting, and myriad other scams to transfer ever-greater concentrations of wealth into the hands of a tiny governing elite.

None of this is headed anywhere positive. Congressional leaders play the part of Nero, fiddling on the rooftop in near-total disconnection from the populace while the society they sit atop burns to the ground.