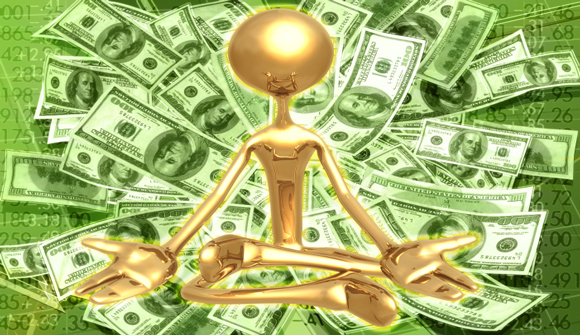 A Bitcoin Exchange Holding $4.1 Million For 1,000 Customers Has Simply Vanished … A Chinese Bitcoin exchange that held up to $4.1 million in users' accounts has gone offline and everyone involved with it has vanished, according to CoinDesk. – Business Insider

Dominant Social Theme: Bitcoin is a suspicious kind of money.

Free-Market Analysis: We've written several articles somewhat critical of bitcoin, which has predictably generated a wave of irritated feedbacks from the faithful.

And certainly bitcoin has its defenders. In fact, the electronic currency has considerable value according to quoted prices, though how useful it is as an actual conveyance of value from buyer to seller continues to be questioned.

Our criticisms fell mainly into three categories, and we think those criticisms remain relevant today, especially considering the problems bitcoin is encountering of late, as we can see in the article.

First of all, we suggested that bitcoin might have been created by Western Intel as a way of anticipating a wave of electronic currencies birthed by the Internet. Might as well get the problem out in the open, so-to-speak.

Our main reason for this suspicion was the truly incredible bitcoin backstory. Supposedly the bitcoin concept originated with a Japanese inventor who called himself Satoshi Nakamoto. Satoshi deposited directions for bitcoin on the Internet, and the rest is history. Satoshi, dramatically, has never been heard from again.

We also suggested that bitcoin wasn't as secure as those involved in its operation believed it was. The anonymous facility that bitcoin employs is called TOR, short for the The Onion Router. The Pentagon's DARPA was involved with its creation, which is kind of ironic considering that those using Bitcoin are counting on TOR to provide anonymity against various official facilities.

TOR obviously didn't save the founder of Silk Road who was just arrested for abetting drug trafficking. And, according to Wikipedia, recent attacks on Freedom Hosting users show TOR vulnerabilities in servers and web browsers, which is part of what we had suggested initially.

Finally, there is the issue of gold-as-money and the attitude of bitcoin users that its success thus far is proof-positive that precious metals are old-fashioned and that digital currencies will render them deservedly obsolete. We disagree. It's naïve, as gold and silver have been used as money metals for millennia.

Even more disturbing, there is at least a tendency of supporters to conflate bitcoin with the noxious public banking movement that embraces any kind of money that is not based on precious metals. But there is no doubt that precious metals are money; they have come under attack in the modern era because globalists want to do away with all kinds of money and currency with the exception of central-bank controlled digital ones. Bitcoin enthusiasts that use the currency as a jumping-off-point to attack gold and silver are unwittingly supporting this crowd.

Of course, as bitcoin has grown more successful, the attacks on this first, major digital currency have grown shriller as well. This Business Insider article is a case in point, insinuating that bitcoin, because it is unregulated, is more subject to criminal calamities than regulated money. Here's more:

The GBL exchange claimed to be based in Hong Kong but turns out to have been headquartered in China. The Hong Kong Standard reports: The company appears to have launched in May 2013, with its domain btc-glb.com registered on 9th May and a post later that month by Bitcoin Talk forum user zhaoxianpeng promoting the site. Some mainlanders went to the IFC office listed on its website, but this turned out to be a false address. Fourteen of them made a report to the Hong Kong police.

WantChinaTimes notes that GBL had not obtained any of the usual business licenses required to operate a financial services company. Bitcoin banks and exchanges have a habit of disappearing, the WCT says: Research conducted by Southern Methodist University assistant professor Tyler Moore and Carnegie Mellon University assistant professor Nicolas Christin found that 18 of the 40 Bitcoin trading platforms set up in the past three years had closed, including TradeHill, which was once the second largest in terms of transaction volume.

We have noted in the past certain bitcoin exchange difficulties, but we've never made the argument that these problems showed the necessity for further regulation. In fact, the lack of bitcoin regulation is one reason to recommend it.

Another reason to recommend it is the upcoming congressional hearing. The Senate is apparently sufficiently worried about bitcoin to hold formal hearings. Here's more:

Andrew Beal, a lawyer who focuses on helping businesses with federal and state securities compliance as part of the firm Crowley Strategy, says these hearings will only help government better understand bitcoin.

"The legal and regulatory foundation for virtual currencies will be laid over the next few years; these hearings are an opportunity to ensure that lawmakers are getting the right information from the right people," he said.

Englund, expressed optimism that representatives from the bitcoin industry would be involved. "It would certainly enrich the hearing to invite bitcoin experts from academia, venture capitalists and entrepreneurs of bitcoin companies."

She said it's a first step towards literacy and understanding, adding: "As the first congressional hearings on bitcoin, we expect this to be more introductory and educational in nature."

Notice the US Senate has in mind laying the "legal and regulatory framework for virtual currencies." Apparently, they haven't gotten the message that bitcoin was SUPPOSED to be resistant to government rules regarding money.

Nonetheless, the US Senate Committee on Homeland Security and Governmental Affairs decided that the 18th of November will be the date for a hearing on bitcoin and other cryptocurrencies. The hearing is entitled, "Beyond Silk Road: Potential Risks, Threats, and Promises of Virtual Currencies," and one wonders if the FBI's raid on Silk Road was coordinated with the hearings.

Bitcoin's value according to bitcoin exchanges remains impressively high. However, we remain skeptical of bitcoin for the three reasons we enunciated at the beginning of this article. Like WikiLeaks and even Edward Snowden, bitcoin gets a fair amount of publicity in the mainstream media, which also makes us suspicious – as do its stubbornly high valuations.

Perhaps we will learn more about bitcoin and where it is headed during the hearings. One thing is certain: Digital currencies are becoming increasingly common. Time will tell whether bitcoin can retain its value along with anonymity.