STAFF NEWS & ANALYSIS
COVID Propaganda Roundup: Big Pharma Is Getting Its Biotech Into Your Body by Any Means Necessary
By Ben Bartee - November 10, 2021

…Hide Ya Kids, Hide Ya Wife, and Hide Ya Husband, ‘Cause They Vaxxin ‘Eerybody Out Here

Like any committed gang rapists would be, Big Pharma and the corporate state are dead-set on inserting their genetic material into your body — voluntarily or not, through one hole or the other.

“By any means necessary”

With their eyes on the prize – you and your family’s orifices – here are their latest innovative schemes.

‘Grow and Eat Your Own Vaccines’: Frankenfood to Become mRNA Factories

Above: this Biden/Harris voter can’t wait to chow down on some mRNA – because she respects the Science©

They want to genetically modify plants to produce the same mRNA that is in the vaccines.

“‘Ideally, a single plant would produce enough mRNA to vaccinate a single person’ said Juan Pablo Giraldo, an associate professor in UCR’s Department of Botany and Plant Sciences who is leading the research.”

Kale used to be great for the body – tons of vitamin K, C, B-complex, even omega-3s, etc. Now the green superfood will become a vector for experimental mRNA “vaccines” (that aren’t really vaccines)*. And you won’t even know your salad is an mRNA minefield.

*Leaked CDC Emails: ‘ Our Definition of Vaccine is ‘Problematic’

The CDC, as previously reported by The Daily Bell, changed the definition of “vaccine” on its webpages earlier this year. The agency previously claimed these alterations were simply routine updates to The Science©, and therefore questioning their motives was heresy to Neoliberal Church© orthodoxy. One must respect the Science©. 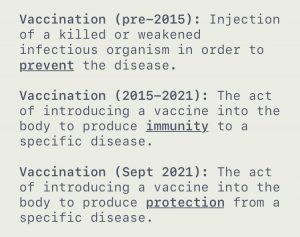 Now, leaked emails reveal the truth: the CDC modified its language around “vaccines” to accommodate the emerging mRNA gene therapies for COVID-19 from Pfizer and Moderna, which do not match any conventional definition of “vaccine” (whether the CDC’s or any other organization’s). 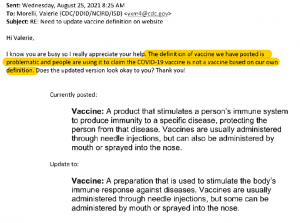 What this means moving forward: the social engineers will simply classify any new biotech the social engineers want to penetrate you and your family with as a “vaccine” or some other accepted term for a medical treatment or device. Any resisters will become, by virtue, “Science© deniers,” “domestic terrorists,” etc.

“Therapeutics that can be delivered intranasally include proteins like insulin, small molecules, charged molecules, oligonucleotides, therapeutic cells like stem cells and Treg cells, nanoparticles, and microparticles.”

How convenient, then, that Warlord Fauci© now enjoys unprecedented access to the slaves’ nasal cavities to experiment upon. Surely, though, he wouldn’t abuse his position of authority to exploit such privileged access for ulterior motives. 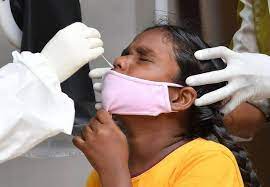 Depicted above: woman respecting the Science©

In a much-underappreciated story broken by Project Veritas, a portly, lispy FDA economist named Taylor Lee shed some powerful light on just how the managerial class views the average peasant.

In their eyes, you and your family are less than human – chattel to be poked and prodded whether you consent or not.

Watching the whole video is worthwhile, but here are the highlights:

Taylor Lee, according to his LinkedIn account, still has a publicly-funded job inside the FDA.

Connecting the dots, Eco-Health Alliance is the same “nonprofit” group that Warlord Fauci funneled public money to for gain-of-function research into bat coronaviruses. He then lied to Congress about his activities, for which he deserves prosecution.

What this means: the technology, the will, and the funds exist for the social engineers to spray chimeric spike proteins, or whatever other biotech they want, into the atmosphere, from which there is no escape. You’ll breathe it in, and whatever happens next happens.

Bio-Surveillance: Monitoring Your ‘Analprint’ to Make Sure You’ve Been Good Boys and Girls, Eaten Your mRNA Veggies

It turns out that you can detect compounds that are diagnostic of exercise [show you have done some]; you can see when an over-the-counter medication comes into the system and clears out; you can see molecules that correlate with how well you slept, how much fat you had in your diet, what your calorie intake was.”

Obviously, they’ll sell their product, as they always do, with the clever marketing trick of “it’s for your own good.” But, in the end, it will simply turn into another tool to track and trace human livestock (you), including ensuring you’ve ingested the proper biotech in the proper concentration (as determined by some Big Pharma engineer). 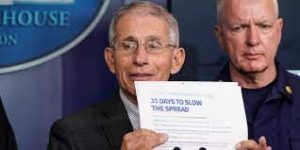 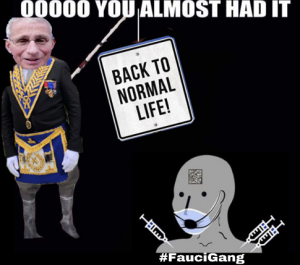 “I can’t see that COVID is not going to be with us forever. There will be different advice about different schedules and which doses you get but at the moment our priority has to be getting first and second doses into people and there will be recommendations about booster doses in the future… This will be a regular cycle of vaccination and revaccination.” 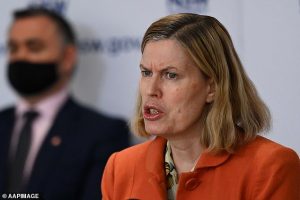 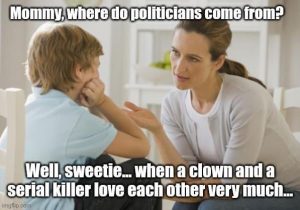