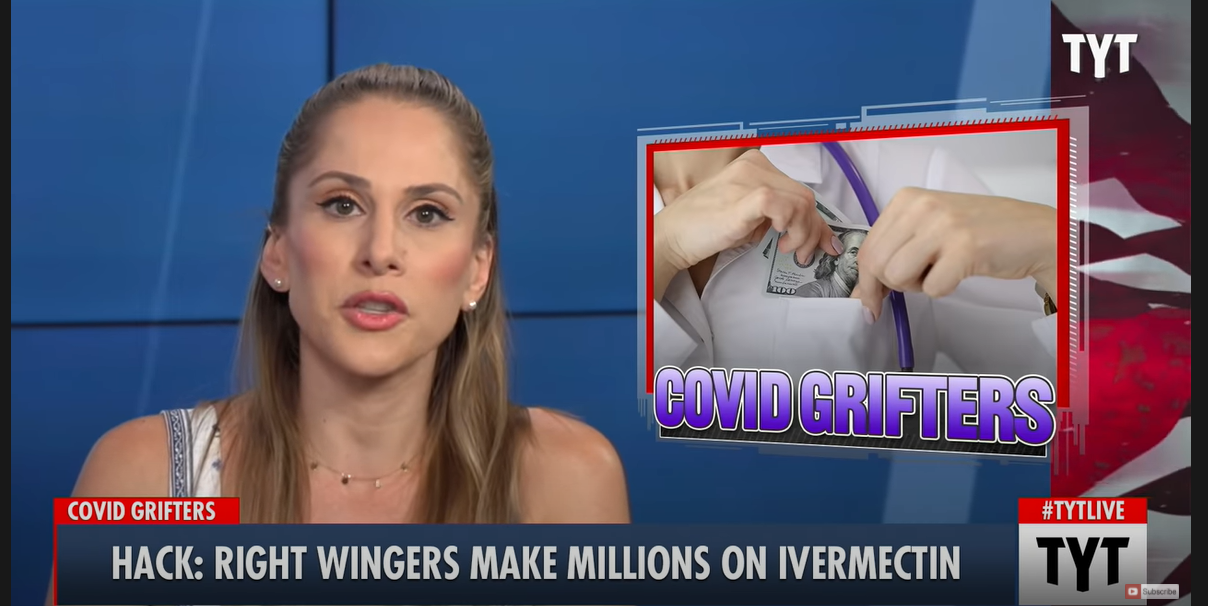 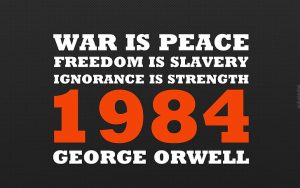 When the social engineers issue their pseudoscientific proclamations to the public, they are often not merely factually incorrect but rather 180-degree inversions of reality – psychological projections of their own nefarious tactics onto their opponents.

Here’s how the COVID reality-inversion hustle works in practice:

Reality-inversion tactic#1: Accuse alternative medicine practitioners of profiting off of the pandemic (as we will explore in-depth later vis a vis the Young Turks segment below) while conveniently ignoring the Big Pharma’s record-breaking, unprecedented profit motives to push mRNA ‘vaccines’

Inverted Reality via The Young Turks: 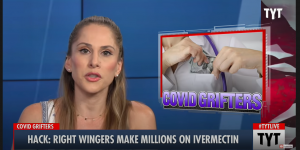 Reality-inversion tactic #2: Accuse the unvaccinated of “spreading COVID” (via the “pandemic of the unvaccinated” talking points pushed by Biden, CDC, NIH, et al.) when, in reality, the vaccinated are far likelier to harbor new virulent strains and distribute them throughout the population

“Vaccines that keep hosts alive but still allow transmission could thus allow very virulent strains to circulate in a population…  anti-disease vaccines that do not prevent transmission can create conditions that promote the emergence of pathogen strains that cause more severe disease.”

*Note the pseudoscientific the weasel phrase “US officials fear,” a variation on the clever and subtle “experts say” scam we’ve previously discussed that allows the corporate media to disseminate unfounded, speculative claims while hiding behind the assumed authority of (often anonymous) “experts”

Reality-inversion tactic #3: Accuse powerless, regular unvaccinated citizens of somehow “causing lockdowns” when the governing health authorities obviously institute such policies (a type of mass-scale victim-blaming, a tactic the left theoretically opposes – except when it becomes convenient for their narrative): 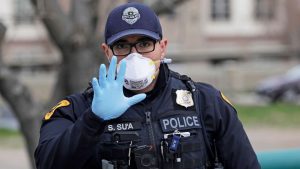 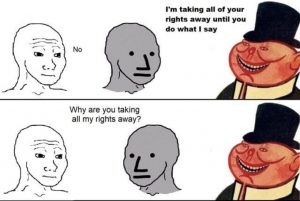 Reality-inversion tactic #4: Accuse COVID skeptics of using fear to push an anti-lockdown, anti-mandatory vaxx agenda when they, in reality, use fear to push their lockdown agenda:

Reality via The Telegraph:

*The federal database referenced is Vaccine Adverse Event Reporting System, or VAERS, in which only 1-10% of adverse vaccine reactions are actually reported – meaning it undercounts vaccine deaths, not overcounts, as corporate-state propagandists often insinuate in an attempt to downplay the dangers of experimental mRNA shots

Reality-inversion tactic #5: Harass regular Americans for alleged non-cooperation with lockdown measures when they don’t abide by any themselves

Reality: Elites blatantly flout the same COVID masking restrictions that they publicly support (while their servants are masked) 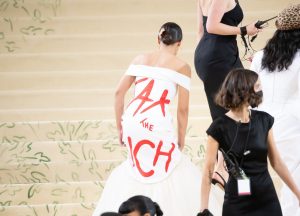 “The footage appeared to show dozens of unmasked people seated elbow to elbow at long luncheon tables as Pelosi (D-Calif.) gave a speech and masked waiters ambled between the listeners.” 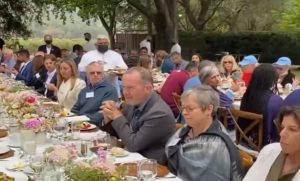 Inverted Reality – non-mask compliance is actually Trump’s and the MAGA peasants’ fault — via The Atlantic:

“When [Trump] mocks mask wearers for appearing weak and sees face coverings as a political statement against him, it’s no surprise that some Americans are loudly declining to wear them. Mask refusers are more likely to be politically conservative, an ominous trend when new coronavirus cases and hospitalizations are increasing steeply in some red states—the very states where mask mandates are least likely to be adopted.”

“No one should be forced to be vaccinated against their will both because of the constitutional right to refuse treatment, and pragmatically because forced vaccination will deter at least some people from seeking medical help when they need it.”

“Attributing one’s own maladaptive inner impulses to someone else. For example, someone who commits an episode of infidelity in their marriage may then accuse their partner of infidelity or may become more suspicious of their partner.” 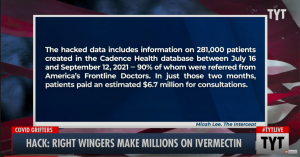 This Sep 30th clip is the latest in the Young Turks’ political crusade against ivermectin, an actually safe and effective COVID therapeutic adopted by medical groups and governments worldwide.  The Young Turks don’t approve because their Gods –Anthony Fauci, Pfizer, the CDC, and the FDA, et al. – have not ordained it.

The highlights (or lowlights, whichever):

And so on, the video continues for another 6 minutes, with more inversions following.