“Why, sometimes I’ve believed as many as six impossible things before breakfast.” 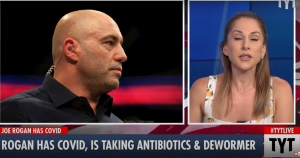 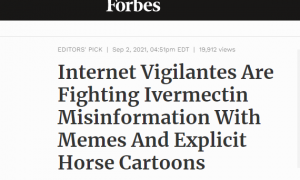 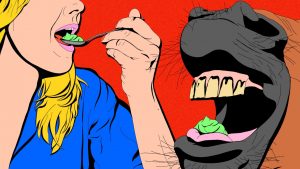 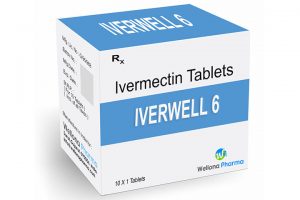 Human ivermectin tablets for human consumption – not a paste, nor for horses

The sage wisdom of Warlord Fauci/CNN/Pfizer: 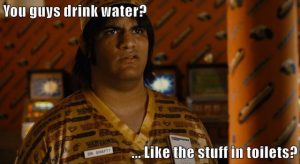 A January 2021 study by the American College of Chest Physicians – one which will never see the light of day in the New York Times or in a Snopes “fact-check” – assessed the clinical effectiveness of ivermectin treatment in seriously ill patients:

TL;DR: The research team, to boil it down to stupid-simple brass tacks for the scientifically illiterate goons at CNN, interpreted the results without all the hard-to-grasp statistics:

“Ivermectin treatment was associated with lower mortality during treatment of COVID-19, especially in patients with severe pulmonary involvement.”

A randomized, controlled 2020 Egyptian study suggested ivermectin may exert protective benefits against ever developing COVID-19 when administered as a preventative measure:

“Among 203 asymptomatic close family contacts who received ivermectin, only 15 (7.4%) were noticed to develop the infection. While, in 101 contacts who didn’t use ivermectin, 59 (58.4%) developed the disease.”

Some researchers speculate that, in parts of Africa — where ivermectin supplementation is routine as a malaria prophylactic — its use may explain those regions’ relatively low COVID-19 mortality rates:

“The morbidity and mortality in the onchocerciasis endemic countries are lesser than those in the non-endemic ones. The community-directed onchocerciasis treatment with ivermectin is the most reasonable explanation for the decrease in morbidity and fatality rate in Africa. In areas where ivermectin is distributed to and used by the entire population, it leads to a significant reduction in mortality.”

Studies like the ones above are legion. So why is CNN et al. so insistent on demonizing this potentially life-saving therapeutic?

Via The Japanese Journal of Antibiotics:

“As of the 27th of February 2021, the results of 42 clinical studies worldwide have undergone meta-analysis and concluded that ivermectin is effective in the treatment and prevention of COVID-19…

“Kitasato University, based on the judgment that it is necessary to examine the clinical effect of ivermectin to prevent the spread of uncertain COVID-19, asked Merck & Co., Inc. to conduct clinical trials of ivermectin for COVID-19 in Japan… However, the company said that it had no intention of conducting clinical trials..”

Obviously, the above-cited research begs for a harder look.

“Joe Rogan on Wednesday posted a video to social media in which he revealed that he has COVID-19. The comic and popular podcast host said he took Ivermectin, a dewormer meant for horses that the CDC says is “not authorized or approved by FDA for prevention or treatment of COVID-19…

Ivermectin has been falsely touted by some anti-vaxxers as an alternative to getting a COVID-19 jab.”

See how that works? A truly safe, effective, accessible therapeutic is conflated with “anti-vaxxers” and horses. Therefore, by fiat, it’s “anti-science.”

Although he is among the most prominent example, Joe Rogan is by no means alone. The media is eager to pounce and vilify any figure with significant clout to deter the popular use of ivermectin as a COVID treatment. 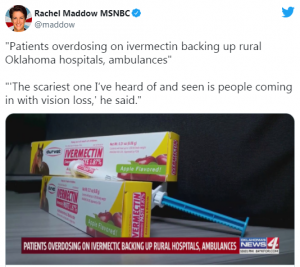 “The rise in people using ivermectin, an anti-parasitic drug usually reserved for deworming horses or livestock, as a treatment or preventative for Covid-19 has emergency rooms ‘so backed up that gunshot victims were having hard times getting’ access to health facilities, an emergency room doctor in Oklahoma said. … This week, Dr. Jason McElyea told KFOR the overdoses are causing backlogs in rural hospitals, leaving both beds and ambulance services scarce.”

That all sounds super scary. If true, some public health intervention might be in order. The issue, though, is that none of it is true; the lone doctor’s account (the sole source used in the piece) was a lie fabricated out of thin air – a convenient one for the anti-ivermectin, anti-science narrative that got picked up in the corporate press by all the usual suspects and relentlessly parroted as fact.

Via Northeastern Health System, the hospital group in question:

“Although Dr. Jason McElyea is not an employee of NHS Sequoyah, he is affiliated with a medical staffing group that provides coverage for our emergency room… McElyea has not worked at our Sallisaw location in over 2 months. NHS Sequoyah has not treated any patients due to complications related to taking ivermectin. This includes not treating any patients for ivermectin overdose.”

“A a time of a global crisis, when vaccination rates are slumping in the face of a relentless virus, [ivermectin] research is being used to give desperate people false, and potentially dangerous, hope about the miraculous properties of a drug proven only to help kill parasites.

‘The thing that really worries me is it’s being explicitly used as an alternative to vaccines by some people,’ [ivermectin critic Kyle] Sheldrick said.

“Profits over people, narrative over science” = the eternal, overarching dogma of the biomedical corporate state.