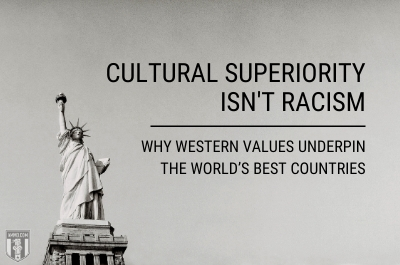 Elements of the left and their allies in the media are constantly driving this point home: White people are bad and so is the culture that they have created. Everything we value as a society is bad and, more than that, little more than an ex post facto justification for the subjugation of non-whites. Western culture is white culture, and all things white are bad.

But as with everything else which these elements of the left and their allies in the media push, this is simply false. While the overlap between white people – that is, people of European descent and some Christian populations in the Caucasus – and Western culture is undeniable, it is likewise undeniable that Western culture is no longer the exclusive domain of whites. What we can call, without the slightest bit of stretching the truth, Western culture is present not just in Western Europe, North America and Australia, but also in former British colonies such as Israel, Singapore and Hong Kong.

What’s more, a country simply being part of Europe does not make it “Western” in any meaningful sense. While there is a certain Western cultural continuum based around Christianity that extends from Lisbon to Vladivostok, it would be overly simplistic (and indeed, a bit demeaning) to label the post-Soviet countries as “Western.” They have a similar set of cultural values rooted in Christianity, however, even the introduction of democracy has not made many post-Soviet and post-colonial nations more liberal in the true sense of the word – open markets, an emphasis on free speech, strong private property rights, an independent, impartial judiciary, and the primacy of the individual over that of the group.

Throughout this article we will provide some terms to define what we mean by “Western culture.” We will also make the case that Western cultural values have a universal aspect in the sense that they can be applied with success anywhere in the world, that these values are objectively superior to other value sets at maximizing human freedom, quality of life, and potential, and that the belief in this superiority has nothing to do with “racism” in the sense that it is commonly understood by ordinary people.

One demonstration of the proof that these values are objectively superior is that “people vote with their feet”, as Dr. Jordan Peterson points out: “The fundamental assumptions of Western civilization are valid. Here’s how you know: Which countries do people want to move away from? Not ours. Which countries do people want to move to? Ours! Guess what, they work better. And it’s not because we went around the world stealing everything we could get our hands on. It’s because we got certain fundamental assumptions right – and thank God for that.”

What Are Western Values?

Before going any further, it is necessary to define what we mean by “Western values.” Indeed, what we mean by this is very specific and has a basis not in the West at large, but specifically in Anglo-Saxon culture. Virtually all of the values that we will identify in this article as being “Western” are perhaps more accurately termed “Anglo-Saxon values.” However, as the former term is more concise, succinct and in greater general use, we will use “Western values” throughout this article.

So what are these values? What is their origin? Where do they come from?

Again, it is our belief that what we call “Western values” are rooted firmly in the Anglo-Saxon tradition above all else. The formalization of these values can be found in the Magna Carta, but this simply codifies values that had been practiced in long standing in post-Anglo-Saxon Britain and likely long before it in some sense, going back to the days when the Angles and Saxons roamed the border regions between what is now Germany and Denmark.

While the Magna Carta is a complicated document, for our purposes it means something succinct and simple: it means that the king is not above the law.

There are a number of principles that flow from this general recognition that form the bedrock of Western civilization: Legal norms apply to everyone regardless of social class. The right to a fair trial by a jury of one’s peers and the right to face one’s accuser in open court. The right to one’s own property and the right to defend that property using deadly force. While these rights have all been hemmed in – in extreme ways in some cases, particularly since the events of September 11, 2001 – the point is that they form the bedrock of our legal structure and value culture in the West.

To boil this down to a single sentence: the West believes that men have the right to life, liberty and the pursuit of happiness and that these rights can only be deprived through due process of law. Both national constitutions and prevailing moral attitudes prevent angry mobs or powerful oligarchs from systematically depriving unpopular and powerless minorities of their rights.

Western values are not universal in the sense that they will eventually be arrived upon by all cultures given enough time. They are not, contra Francis Fukuyama, an endpoint of history, a teleological goal post that all of humanity has been moving toward for its entire existence. It comes out of a very specific lineage, the Anglo-Saxon culture of yeoman farmers, freeholding lords, restive barons and, more than anything else, a total rejection of the notion of authoritarian kings who could rule at their whim without, at the very least, the consent of the men providing armed bodies for their war efforts and paying the lion’s share of taxes.

But perhaps Western values are universal in another, different respect. Consider what we said earlier: These values are by no means limited to the Anglosphere, though they do seem to be strongest in former British colonies – North America, Australia, Israel, Singapore, Hong Kong. These values manifest in different ways in each of these places and it would be more than a little odd if they didn’t.

However, the basic notion that there are a set of legal norms applying to everyone and, perhaps more importantly, that property rights are as important as other rights such as free speech, seem to have a universality about them. By this we mean that everywhere they have been put into practice, they have yielded impressive results in allowing human society to reach a greater potential while also providing better results for greater numbers of people.

Why does this matter? Well, Communist nations have historically raised living standards dramatically. Compare Russia during the waning days of the Romanovs to the Soviet Union in the 50s, 60s and 70s, or China today to China 70 years ago. But this is only impressive if you ignore the failure of Communism with regard to the rights of the individual and the rather sterile record of Communists with regard to innovation and invention. Sure, the Soviets beat America in the space race by putting a few dogs and satellites in the air – and then promptly did nothing else. Similarly, China is known far more for stealing Western intellectual property than it is for innovating its own.

Innovation is necessary for both maintaining quality of life for large and growing populations, and for increasing quality of life. Again, China presents an important test case in what happens in a growing economy without transparency, an emphasis on the rights of the individual and the freedom to innovate that comes with an open, liberal economy: China’s one-child policy, which has been demographically disastrous beyond the humanitarian considerations, as well as its environmental degradation are both symptoms of a society that has become aggressively anti-liberal, stifling innovation.