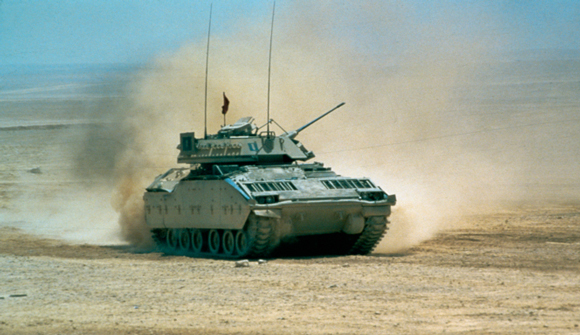 Iraqi security forces lost 2,300 Humvee armored vehicles when Islamic State overran the northern city of Mosul in June 2014, Prime Minister Haider al-Abadi said on Sunday in an interview with Iraqiya state television. Coupled with previous losses of American weapons, the conclusion is simple: The United States is effectively supplying Islamic State with tools of war the militant group cannot otherwise hope to acquire from its patrons.

In addition to the Humvees, Iraqi forces previously abandoned significant types and numbers of heavy weapons to Islamic State. For example, losses to Islamic State include at least 40 M1A1 main battle tanks, as well as small arms and ammunition, including 74,000 machine guns, and as many as 52 M198 howitzer mobile gun systems. "We lost a lot of weapons," Abadi admitted. – Reuters, June 2, 2015

Iraqi Prime Minister Abadi may be the most honest politician on the planet, at least judging by this one statement. His troops most certainly did "lose a lot of weapons."

Let's add this up. Iraqi forces abandoned and/or lost some 2,300 armored Humvees, 40 M1A1 battle tanks, 74,000 machine guns and 52 howitzers. This is not simply "a lot of weapons." It is more weaponry – and better weaponry – than the entire army has in many nations, and doesn't include what the Islamic State acquired in its many subsequent victories.

For whatever reason, the Iraqi forces seem unable to keep control of its vast American-supplied arsenal. Why not? It might because they know they can always get more. Last year – after the losses listed above – the U.S. State Department approved transfer to Iraq of 1,000 more Humvees along with their armor upgrades, machine guns and grenade launchers; 250 MRAP armored vehicles; 175 more M1A1 tanks, 55,000 rounds of tank ammunition, $600 million in howitzers and trucks, $700 worth of Hellfire missiles and 2,000 AT-4 rockets.

Anyone who has ever reared a teenager knows that immediately replacing the car your child just wrecked simply invites further carelessness. The U.S. State Department has not learned this lesson. The new weapons will almost certainly fall into Islamic State hands very soon. Some already did just a few weeks ago when Iraqi troops fled from Ramadi.

When the government seems to be behaving irrationally, a good rule of thumb is to follow the money. Who benefits when the U.S. effectively supplies weapons to both sides of a conflict? The weapons builders, of course. Their business model is working exactly as intended. They sell weapons, then sell more weapons to destroy the first batch, and then sell yet more to replace those destroyed in the process.

Not everyone wins, of course. The Iraqi and Syrian people see their country again becoming a battleground. In addition to the Iraqi-ISIL crossfire at ground level, they also have to dodge U.S. aerial bombardment. Those aircraft and the ordnance they drop represent bonus revenue for Daddy Warbucks.

U.S. taxpayers lose, too, since they have to foot the bill for all this. At the rate it is going, American ground troops will almost certainly enter the fray at some point, and some of them will die.

The loser list is much longer than the winner list – in all wars, not just this one. The Paid-for NFL Patriotism http://www.dailybell.com/news-analysis/36319/Paid-for-Patriotism-in-the-NFL/ is working as intended. The American people think they are winning. They are wrong.