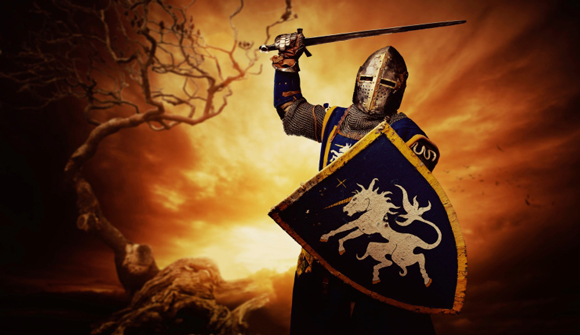 Don't Let the Dark Ages Happen Here … Last month, Iranian-born Stanford mathematician Maryam Mirzakhani became the first woman to win the prestigious Fields Medal, the highest honor in mathematics. Congratulations are in order. Mirzakhani did her work here in the U.S., which illustrates an unhappy fact: Central Asian scientists are forced to come to the U.S. to do pioneering work because of the repressive governments and poor, resource-dependent economies of their home countries. – Bloomberg

Dominant Social Theme: The West must remain a bright beacon of freedom.

Free-Market Analysis: This is a funny editorial in Bloomberg because its author is convinced that mainstream dominant social themes constitute the truth of this world.

The article worries that a withdrawal of belief in elite memes indicates that Dark Ages are creeping over the West once more.

Our perspective would be the reverse. It is the Internet Reformation that has shaken belief in elite memes and caused people to question the matrix around them.

Gradually, fresh viewpoints are creeping into the stale sociopolitical, scientific and economic conversation. One can also argue that individuals enlightened by the free-flow of information are extending the boundaries of what can be discussed.

Today, the legalization of cannabis, and indeed all drugs, can be contemplated. And today the relevance and effectiveness of the West's serial warfare can be questioned. Global warming can be examined and found wanting.

Of course, this article recognizes none of that. Its main preoccupation is that accepted wisdom is failing. The "accepted" wisdom has always been a poor substitute for truth, but that's not how the Bloomberg author or his editors see it.

Rationalism and science have come under attack … The so-called War on Science features attacks from several fronts. The less worrisome attack comes from certain big business interests that don't want carbon taxes, and that have therefore tried to cast doubt on the evidence for global warming.

In and of itself, that isn't so scary – after all, these business lobbyists don't reject science in general, just certain conclusions of certain scientists. But it seems to have led to a general disdain for science among the (mostly Republican) politicians who pay attention to those lobbying groups.

… Few people seem to remember that the TV show "The Big Bang Theory" gets its title from a 2006 incident in which a George W. Bush appointee tried to force NASA to always refer to the Big Bang as just a "theory."

But the most worrying possibility of all is that the American public as a whole might forget about the central importance of science and its contribution to our civilization. There are troubling signs that this is happening, across the political spectrum.

The anti-vaccination movement has spread unfounded paranoia, leading to outbreaks of dangerous diseases that had almost disappeared. Meanwhile, opponents of genetically modified food often go beyond reasonable caution into the realm of technophobia.

How can scientists, and people who recognize the importance of rationalism, fight this trend? People need to be constantly reminded of all the amazing things science has given our civilization.

… The goal should always be to educate, uplift and enlighten – to bring science and rationalism, the great enablers of modernity, to the masses.

And yet recently the US Centers for Disease Control (CDC) came under fire for withholding evidence that would tend to cast doubt on vaccine safety – at least in some cases. There is at least one whistleblower action pending.

The Bloomberg editorial singles out the anti-vaccine movement and "anti-warmists" as signs that the scientific method is failing the West. According to the editorial, if you don't adhere to certain beliefs – including the "big bang" you are encouraging Western ignorance.

From where exactly does this arrogance stem? Is the accepted wisdom so formidable that there can be no deviation from it?

The article makes some good points about the potential for a Dark Age but provides us with examples that undermine its own argument. In fact, what the article interprets as a rising tide of ignorance – arguments that rebut the mainstream wisdom – is actually evidence of a renaissance of critical thinking.

Ironically, the article embodies what it claims to fear. Even when Bloomberg gets it right, it gets it wrong …