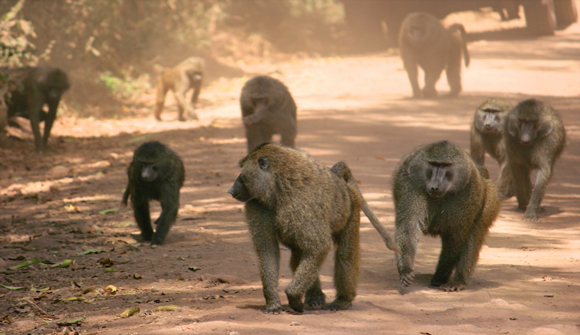 Perhaps baboons should run for office. Researchers tracking a troop of wild olive baboons have found that the primates make travel decisions democratically when disagreements arise over which direction to go.

The findings, published in the journal Science, could help shed light on the evolution of group decision-making in a variety of social animals living in hierarchical structures — humans included.

Researchers have long wondered how animals that live in complex social groups make collective decisions. For example, do certain members take the lead or not? How does a group decide what to do when two or more parties don't agree? – Los Angeles Times, June 18, 2015

After reading the quote above, our first thought was that baboons already have run for office and even won. This would explain legislative behavior in many democratic countries. Scientists missed the opportunity to study this, however, by focusing instead on furry Kenyan baboons.

They found two factors help baboon groups decide which putative leader to follow: how widely the two paths diverge, and how many other baboons agreed with each leader.

Much like humans, baboons split the difference when competing leaders try to take them in roughly similar directions. They take a middle path. When the difference is wide, however, they follow whichever leader has more baboon followers.

This is remarkably similar to human political behavior. When we see little difference between candidates for office, we choose a middle ground by not voting. When the contrast between candidates is greater, we tend to vote the way our families, neighbors and others around us vote.

The pattern suggests a strategy for minority parties. The best way to gain supporters is to show a clear and convincing difference with the ruling regime. "I'm like him, but better" is not a winning message. A certain number of baboons want something significantly different. They will not be a majority, but they will be a start.

Wandering through the jungle may seem pointless at first, but in so doing, these baboon dissident groups might find each other. Eventually, they might grow strong enough to displace the entrenched majority baboons.

Paradoxically, losing may be the first step to winning, at least for baboons. Maybe it is true for humans, too.