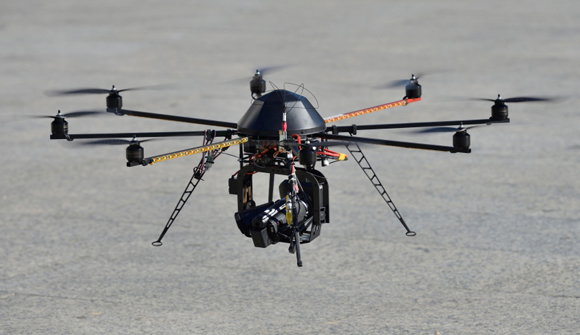 Here is a short clip of Jack Harper (Tom Cruise) in the movie, battling against killer drones that use artificial intelligence to navigate and hunt ‘alien scavengers’, and moments before this scene, it was revealed to Harper that alien scavengers were actually humans.

While DARPA’s FLA program has yet to mount a directed energy weapon with enough kilowatts to blast a human into smithereens, it seems like the agency responsible for emerging technologies for use by the military has entered into Phase two flight tests — demonstrating advanced algorithms in drones could autonomously perform tasks dangerous for humans — such as pre-mission reconnaissance on the modern battlefield in a hostile urban setting.

So, yes, this confirms DARPA is developing human-hunting drones, however, it is more on a reconnaissance basis, rather than human-killing drones in Oblivion.

According to the DARPA press release, Phase one flight tests were completed in 2017, as engineers were able to refine their software and improve sensors on the drones to increase efficiency. Experiments were conducted in a controlled environment at the Guardian Centers training facility in Perry, Georgia, and aerial tests showed the quadcopters were able to navigate in urban settings as well as indoors autonomously. Some of the autonomous flight scenarios included:

“The outstanding university and industry research teams working on FLA honed algorithms that in the not too distant future could transform lightweight, commercial-off-the-shelf air or ground unmanned vehicles into capable operational systems requiring no human input once you’ve provided a general heading, distance to travel, and specific items to search,” said J.C. Ledé, DARPA program manager.

“Unmanned systems equipped with FLA algorithms need no remote pilot, no GPS guidance, no communications link, and no pre-programmed map of the area – the onboard software, lightweight processor, and low-cost sensors do all the work autonomously in real-time.”

“FLA’s algorithms could lead to effective human-machine teams on the battlefield, where a small air or ground vehicle might serve as a scout autonomously searching unknown environments and bringing back useful reconnaissance information to a human team member. Without needing communications links to the launch vehicle, the chances of an adversary detecting troop presence based on radio transmissions is reduced, which adds further security and safety,” Ledé said.

He pointed out the technology could be useful in a search-and-rescue scenario, where FLA-equipped drones could scan in radio silence behind enemy lines for a downed pilot, crew members, and even lost soldiers.

During Phase two, a team of engineers from the Massachusetts Institute of Technology and Draper Laboratory streamlined the number of onboard sensors to lighten the drone for higher speed.

“This is the lightweight autonomy program, so we’re trying to make the sensor payload as light as possible,” said Nick Roy, co-leader of the MIT/Draper team. “In Phase 1 we had a variety of different sensors on the platform to tell us about the environment. In Phase 2 we really doubled down trying to do as much as possible with a single camera.”

DARPA asked the team of engineers to include software that builds a geographically accurate map of the surrounding area as the drone flies. Using advanced software, the drone recognized roads, buildings, cars, and other objects and identified them as such on the map, providing clickable images as well. After the mission, the drone returned to home base and allowed the human team members to download the media content.

“As the vehicle uses its sensors to quickly explore and navigate obstacles in unknown environments, it is continually creating a map as it explores and remembers any place it has already been so it can return to the starting point by itself,” said Jon How, the other MIT/Draper team co-leader.

DARPA asked a separate team of engineers from the University of Pennsylvania to reduce the drone’s size and weight for autonomous flight indoors. UPenn’s quadcopter ” took off outside, identified and flew through a second-story window opening with just inches of width clearance, flew down a hallway looking for open rooms to search, found a stairwell, and descended to the ground floor before exiting back outside through an open doorway,” said the press release.

The drone’s reduced weight and size brought new challenges for engineers since the sensors and computers used in Phase one were too large for the smaller vehicle.

“We ended up developing a new integrated single-board computer that houses all of our sensors as well as our computational platform,” said Camillo J. Taylor, the UPenn team lead. “In Phase 2 we flew a vehicle that’s about half the size of the previous one, and we reduced the weight by more than half. We were able to use a commercially available processor that requires very little power for the entirety of our computational load.”

An important feature of the UPenn drone is its ability to create a detailed 3-D map of unknown indoor areas, avoid obstacles and have the ability to enter and exit buildings, while hunting for humans.

“That’s very important in indoor environments,” Taylor said. “Because you need to actually not just reason about a slice of the world, you need to reason about what’s above you, what’s below you. You might need to fly around a table or a chair, so we’re forced to build a complete three-dimensional representation.”

The next step, according to Taylor, is for the FLA program to be transferred to the Army Research Laboratory at the Adelphi Laboratory Center in Adelphi, Maryland for further development for potential military applications.

And if these advancements are not mind-boggling enough, it is only a matter of time before the FLA program could be integrated into drones capable of autonomously hunting America’s enemies in the homeland or in some hybrid war overseas, sort of like in the movie Oblivion.

Contributed by Zero Hedge of www.zerohedge.com.