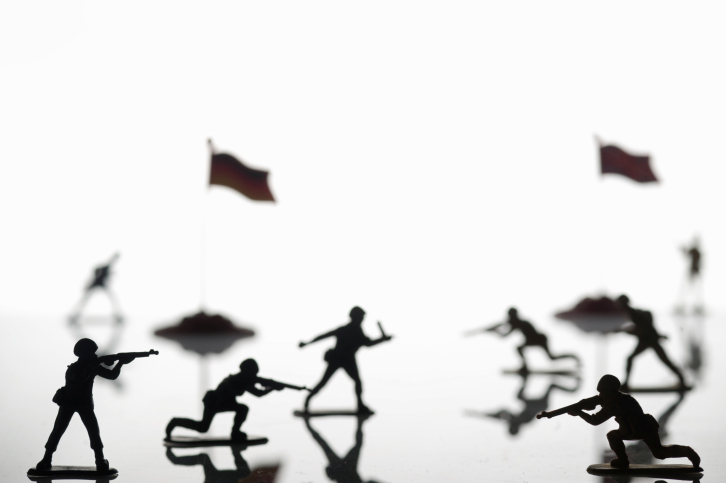 Islamic State threat 'beyond anything we've seen': Pentagon … The sophistication, wealth and military might of Islamic State militants represent a major threat to the United States that may surpass that once posed by al Qaeda, U.S. military leaders said on Thursday. "They are an imminent threat to every interest we have, whether it's in Iraq or anywhere else," Defense Secretary Chuck Hagel told reporters at the Pentagon. Hagel's assessment of Islamic State, which gained strength during Syria's civil war and swept into northern Iraq earlier this summer, sounded a note of alarm several days after the group posted a video on social media showing one of its fighters beheading an American hostage kidnapped in Syria. – Reuters

Dominant Social Theme: The threat of the Islamic State is truly an existential one. The world is now faced with the specter of nuclear destruction based on religious motivations.

Free-Market Analysis: The talk coming out of Washington is grim, as this short news analysis by Reuters shows. In only a month or two, an obscure insurgency making trouble in Iraq has turned into an existential Western threat.

Just read: Hagel says "IS" is an "imminent threat to every interest we have." The speed with which IS has emerged and been so grimly acknowledged is, well … breathtaking.

Asked if the hardline Sunni Muslim organization posed a threat to the United States comparable to that of the attacks of Sept. 11, 2001, Hagel said it was "as sophisticated and well-funded as any group we have seen." "They are beyond just a terrorist group. They marry ideology, a sophistication of … military prowess. They are tremendously well-funded. This is beyond anything we've seen."

Hagel spoke as the United States continued attacking Islamic State targets in Iraq. In the past two weeks, U.S. drones and fighter jets have conducted 89 airstrikes against militant targets in northern Iraq. So far, President Barack Obama has sought to limit his renewed military campaign in Iraq to protecting American diplomats and civilians under direct threat.

Obama ended the war in Iraq that killed thousands of American soldiers and consumed U.S. foreign policy for nearly a decade, Even after the gruesome killing of U.S. journalist James Foley, Obama is seen as unlikely to deepen his near-term military involvement in either Iraq or Syria as he seeks to avoid becoming embroiled in another messy Middle Eastern conflict.

But U.S. officials say they have not ruled out escalating military action against Islamic State, which has increased its overt threats against the United States since the air campaign in Iraq began.

General Martin Dempsey, chairman of the U.S. Joint Chiefs of Staff, said officials were worried about the possibility that European or U.S. nationals, radicalized after fighting in Iraq or Syria, would return to their home countries. Dempsey suggested Islamic State would remain a danger until it could no longer count on safe havens in areas of Syria under militant control.

"To your question, can they be defeated without addressing that part of their organization which resides in Syria? The answer is no. That will have to be addressed on both sides of what is essentially at this point a non-existent border."

Yes, the battlefield is shifting. IS threatened the hard-won stability that the US had gained in Iraq. Now IS must be rooted out of Syria, too, a region where the West's warring has not been going well.

We used the words "West's warring" purposefully because to us, IS is probably yet one more manufactured enemy in a series of them. The West's serial warfare has picked up as of late, in part because the Internet (in our view) is directly challenging power-elite narratives. The response, unfortunately, is predictable: More of them, and in force.

Whether it is global warming, central bank monetary stimulation or now the War on Terror, the globalists behind these memes seem intent on "doubling down" when challenged.

Global warming stalled about 15 years ago but both the alarmist verbiage and potential regulations and taxes to counter the non-existent threat have increased. The economy has not been rescued by central bank monetary nostrums, so more of them are being created … even though demonstrably they don't work. And now we have seen an escalation of the much-maligned and manipulated "war on terror."

We've been on record for a long time as pointing out that the war on terror is more likely aimed at suppressing Western domestic dissent than combating overseas religious radicalism.

In fact, there was so little of the latter that Foggy Bottom, the CIA and other regular suspects have taken to manufacturing what was not initially available. In a series of "color revolutions," the Five Eyes of the Anglo-American axis have apparently destabilized a slew of secular states in Africa and the Middle East and replaced them with overt theocracies.

The string of victims is both impressive and discouraging: The Ivory Coast, Iraq, Tunisia, Egypt, Libya and Syria come to mind, though doubtless there are more. But in each of these countries, a secular regime was toppled via a noxious brew of domestic dissent and covert – or overt – Western Intel and military operations.

Now we are supposed to believe that something called "IS" has emerged fully formed from the bestial brow of Middle East radicalism. But we actually have a good deal of trouble accepting the legitimacy of IS – based on previous Western civil/military involvement in the area.

In fact, it seems to us that the West is creating an Islamic crescent in the Middle East and Africa so as to generate a kind of "clash of civilizations." Such a threat is amorphous, pervasive and radical …

How can an organization like IS exist? The Daily Beast recently published an article entitled, "America's Allies Are Funding ISIS." Here's an excerpt:

The Islamic State of Iraq and Syria (ISIS), now threatening Baghdad, was funded for years by wealthy donors in Kuwait, Qatar, and Saudi Arabia, three U.S. allies that have dual agendas in the war on terror.

The extremist group that is threatening the existence of the Iraqi state was built and grown for years with the help of elite donors from American supposed allies in the Persian Gulf region. There, the threat of Iran, Assad, and the Sunni-Shiite sectarian war trumps the U.S. goal of stability and moderation in the region.

It's an ironic twist, especially for donors in Kuwait (who, to be fair, back a wide variety of militias). ISIS has aligned itself with remnants of the Baathist regime once led by Saddam Hussein. Back in 1990, the U.S. attacked Iraq in order to liberate Kuwait from Hussein's clutches. Now Kuwait is helping the rise of his successors.

As ISIS takes over town after town in Iraq, they are acquiring money and supplies including American made vehicles, arms, and ammunition. The group reportedly scored $430 million this week when they looted the main bank in Mosul. They reportedly now have a stream of steady income sources, including from selling oil in the Northern Syrian regions they control, sometimes directly to the Assad regime.

But in the years they were getting started, a key component of ISIS's support came from wealthy individuals in the Arab Gulf States of Kuwait, Qatar and Saudi Arabia. Sometimes the support came with the tacit nod of approval from those regimes; often, it took advantage of poor money laundering protections in those states, according to officials, experts, and leaders of the Syrian opposition, which is fighting ISIS as well as the regime.

You see? The salient point of the article is that Kuwait, Qatar and Saudi Arabia all funded ISIS (IS). The US salvaged Kuwait during the first Iraq War and US military bases in Qatar served as the jumping-off point for both the first and second Iraqi invasions. Saudi Arabia is the US's closest ally in the region and is single-handedly responsible for initiating the Age of the Dollar by refusing to trade its oil for anything but greenbacks.

The West seems determined to create a religious/military threat in Africa and the Middle East. IS is just the latest evolution of this strange strategy, and a virulent and discouraging one. Expect the destabilizations to continue, along with a high pitch of rhetoric and fitful acts of violence and retribution on both sides.

The globalists who are apparently behind these ventures seem to operate from an ancient and despotic playbook. And they have given us ample warning that at least for the moment they will continue to do so.