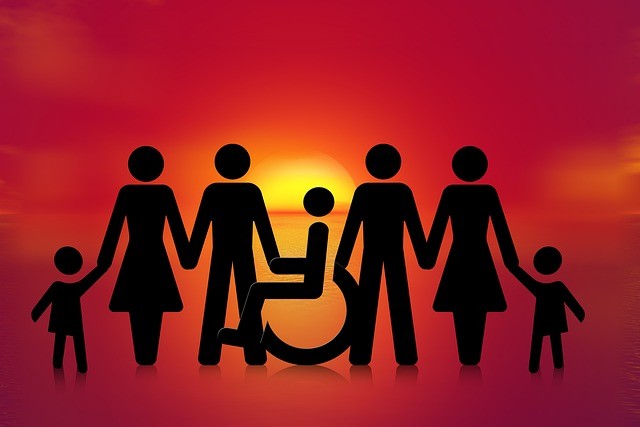 The “Oppression Olympics” – the victimization hierarchy in which more extreme victimhood equals higher social status – is an odd outgrowth of the wider helicopter-mom, “everybody-gets-a-trophy,” “Nerf-the-world” culture that saturated everything circa the 90s. It proliferated from there under the guises of “tolerance” and “equity.”

One might flippantly assume that nature or fate – a bad genetic role of the dice or an unfortunate accident – might be to blame for disability. But it’s actually “ablest” society, according to the “disability community.”

Society, according to disability culture, is designed to weed out the disabled and exclude them from participation. The challenges that disabled people face aren’t due to their disabilities per se; they’re due to society’s failure to properly accommodate them.

"She can't get inside the building because of her wheelchair."

No. She can't get inside because the building is not accessible. The building has a barrier that does not let her in. The wheelchair is not the problem; the building's lack of access is the problem.

Nothing is ever their fault, or their own issue to handle. Everything is society’s fault, and society’s problem to fix.

The oppression matrix is multifaceted – or, to borrow an expression from Social Justice©, “intersectional.” Various markers of oppression converge to determine an individual’s ultimate victimhood score and, accordingly, their place in the hierarchy.

A non-exhaustive list of the ever-expanding victimized classes include:

Disability, like the other markers of victimhood, is a virtue – a currency that members can cash in on for higher rank.

It’s an arms race to the bottom, to continually innovate new oppressed categories of disability, the end goal being to claim the ultimate set and win the game. It’s like Pokémon but the objects are autism and ADD instead of Squirtle and Pikachu.

Given the social incentives, it’s not surprising that normies with no real disabilities are fakin’ it ’til they make it – much like Rachel Dolezal pretending to be black or trans-trenders transitioning for the social media clout.

Misery loves company. If disability activists had their druthers, they’d be content to lock down society in a permanent state of Public Health© forever-emergency, with everyone else shuttered alone inside, anguished and afflicted and deathly afraid of everything – which is how they mostly live their own lives anyway.

The American Association of People With Disabilities (AAPD) succinctly confirms that COVID-19 was a boon for the disability industry. As the biomedical security state’s biggest cheerleaders, they never want it to end.

How and why does a person voluntarily commit to victimhood as their primary identity?

From the 10,000-foot view, disability culture isn’t much different than the ongoing fentanyl epidemic or the recent suicide spike. It’s a coping mechanism.

But, at a deeper level, the primary driving force of all these phenomena is lack of meaning and atomization. The French sociologist Émile Durkheim termed it “anomie.” To fill the void, humans embark on a desperate search to recover a sense of identity – often finding it in the strangest of places, like a blind man feeling his way through a maze.

“God is dead,” as Nietzsche asserted – a widely misinterpreted declaration that didn’t refer to the literal death of God as a celebration of nihilistic triumph. Rather, it referenced the loss of meaning in a society that derived it, up until the post-Enlightenment period, from religion.

Their disabilities are all the activists have to cling to. Spiritual decay is the real disability.

Their disability is their identity, that from which they derive their sense of purpose and place in place of a more nourishing identity. They don’t want to get better, because to lose the former would mean the loss of the latter.

To preserve their identity, therefore, they adopt a religious conviction that they will never achieve physical/mental normality, no matter what evidence to the contrary presents itself, or what opportunities they are offered to recover.

“Happily saying to a chronic illness patient who has not been formally diagnosed with anything but is feeling terrible, ‘Great news, all your tests came out looking normal,’ is smug and condescending, and you know exactly what you’re doing when you do so.”

They are martyrs for a war that they invented against their own bodies, and are the only ones fighting. Professional campaigners build their careers around creating spectacles of themselves highlighting their cruel oppression.

“I asked to go to the toilet and they just said ‘no we don’t have an aisle chair onboard’, with no suggestions of what I was to do… thankfully as I have good upper body strength I proceeded to drag myself down the aisle towards the toilet.”

This is narcissistic self-marketing masquerading as civil rights activism.

Notice that the video is credited to the “disability campaigner” herself, which means that this woman made a whole production out of her airplane bathroom experience, premeditatedly deploying a videographer to record her crawling to the airline toilet like Jesus bearing the cross. Persecution by an ableist society is her martyrdom.

Obvious logistical questions that any normal person might ask arise like: why wouldn’t the person filming have just put the phone down and helped her out? Also, what would this lady have the airlines do?

If avoiding embarrassment and retaining her dignity truly were her goal, she would have failed miserably. Sacrificing her dignity out of desperation to discover meaning in a senseless, hollow world is the point.