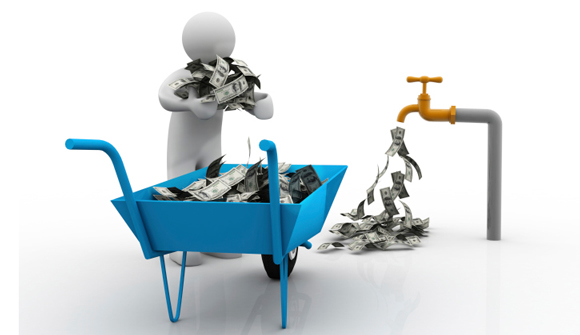 Why is the liquidity trap? Credit where credit is due; Paul Krugman anticipated this where many others did not … Since late 2007 the monetary base has risen more than 300 percent, while GDP and consumer prices have risen less than 20 percent. And no, the disconnect is not all due to the 0.25 percent interest rate the Fed pays on reserves. The bottleneck remains, as it has for most of the past half decade, within the Federal Open Market Committee. One of these days Mr Krugman should start treating the lessons of the Depression and the need for a more aggressive monetary policy as something more than a bloggy footnote. – The Economist

Dominant Social Theme: The problem Western economies like the US are having is because central bankers are not aggressive enough.

Free-Market Analysis: Just when we believed the lunacy couldn't get any worse, here comes The Economist magazine with a diagnosis for fixing what ails the US: Print more money. Print it hard and fast.

This analysis focuses on the proverbial "liquidity trap." It is, of course, a Keynesian concept and the idea is that when interest rates reach Zero Lower Bond (ZLB) and can't go any lower, consumers begin to hoard cash in the expectation of deflation. That means money doesn't circulate and a bad economy becomes worse.

But is this so? The lack of monetary velocity is not of itself responsible for a moribund economy. This would seem to be typical technocratic, authoritarian thinking. A certain kind of mind sees that money is not circulating and then comes up with a fancy term like "liquidity trap" that explains the process without clarifying it.

The REASON the money is not circulating is because people don't know how much further the economy is going to fall, or how hard. It's not fear of deflation that keeps people from spending their money but the suspicion that those who manage the money haven't allowed the economy to hit bottom.

The bankrupt firms are still standing. The loss-making management is still employed. Isn't that so? Where would you put YOUR money to work when all the big corporate bankrupts are not allowed to fail?

We get none of this from this article, though. Only the sense that economics includes a straight linear trajectory from Malthus to Marx to Keynes. Economies are meant to be managed. It's the "Wealth of Nations" all over again … as Adam Smith misguidedly described it.

Only, it's not. It's your wealth. And ours. And we're not nation-states. We're people.

Another appropriate term for this is "human action." But you'll never see that term in The Economist, or very rarely. Instead we get … this. An opinion piece providing us with the entirely pedestrian wisdom that the Federal Reserve is simply not doing enough.

This is what passes for sophisticated analysis in one of the world's most sophisticated money magazines. If you are an achiever, or someone who hopes to be a business success, you want to read The Economist magazine because your competition is. But you'll read stuff like this:

… Friedman and co-author Anna Schwartz conclusively demonstrated that monetary shocks have large effects on the real economy. Christina Romer and David Romer argue in … a working paper that while the "Monetary History" was suggestive, it did not prove conclusively that monetary shocks caused the Depression. Yet the Romers go on to argue that Friedman's and Schwartz's supposition was right: contractionary Fed policy created deflationary expectations that raised real interest rates and gutted the economy. That is: the Fed did it.

When Franklin Roosevelt took America off gold and sought reflation, then expectations flipped and economic growth surged, led by private investment (which rose 500% between 1932 and 1937). This is not just historical arcana. Monetary stabilisation has obviously not worked as one would have hoped since interest rates fell to near zero in 2008. The critical question is why that should be the case. Mr Krugman has written on multiple occasions that monetary policy is not completely helpless at the zero lower bound.

If the central bank were to raise inflation expectations that would provide the necessary monetary traction. I have never understood why that hasn't been the focus of his writing over the past five years: "The liquidity trap is real, and all the Fed has to do to end it is promise higher inflation!"

Instead, Mr Krugman has concentrated on fiscal policy (and on occasionally pushing the idea that the conventional wisdom, that the Fed bears primary responsibility for the Great Contraction, is wrong). I'm all for a big tent approach. If Congress were ready with a big, well-conceived fiscal stimulus and it seemed as though the Fed would allow that stimulus to raise inflation expectations, then I'd cheer. But that's not where we are.

… If the Fed really wanted in its heart of hearts to see inflation expectations up around 3% it might have said so at some point in the past five years, and it might have refrained from pulling the plug on one of its many asset-purchase plans while expectations were short of the mark …

So what the Fed needs to do is to shout high and hard that "inflation is coming" while printing not a few, measly hundred billion but … trillions and tens of trillions! Enough to float the entire country, and even the world. And they ought to do it until that dreaded "liquidity trap" (that exists only in the minds of those who still believe in formal Keynesianism) is fractured once and for all.

What passes for economic analysis in the mainstream media is getting shriller and more out-of-touch the longer this "recession" drags on. Roseate forecasts are filling the air about recoveries in the US and Britain, but as we wrote yesterday, the recovery will be in the eye of the beholder and really will only be a recovery if you are one of a certain class of people.

These monetary-driven recoveries are shallower and shallower as central bankers prop up more and more ruined enterprises. You end up with economies driven by financial activity and speculation … economies that aren't creating any "real jobs," or not enough of them, because average working people either can't or won't involve themselves formally.

The free-market school of economics is the only one with an answer to what's going on. Central bankers have to step away from the printing presses and allow economies to subside back into normalcy. The longer they put off the purge, the worse it's going to get. And remember, virtually the entire Western world of finance was bankrupt just a few years ago. Without Fed back-stopping, holy hell would have broken loose.

So … there is no liquidity trap problem … more meaningless monetary mumbling. What is slowing economies down and what will likely prevent a meaningful economy is the vast baggage of ruined Western financial facilities that central banks are dragging behind them like misery's manacles.

If central bankers want to end the pain and begin a real recovery, stop printing, let bankrupts unravel and let people begin to rebuild their communities, their local economies and even their extended family networks without endless monetary meddling and regulatory interference from on high.

Absent the relentless money stimulation, economies would calm down and so would business cycles. People would rediscover their independence and even regain a certain sense of meaningfulness in their lives based on sound money and the notion that more of the same was contained in their future.

Sounds good? We'll await an Economist article on the subject.