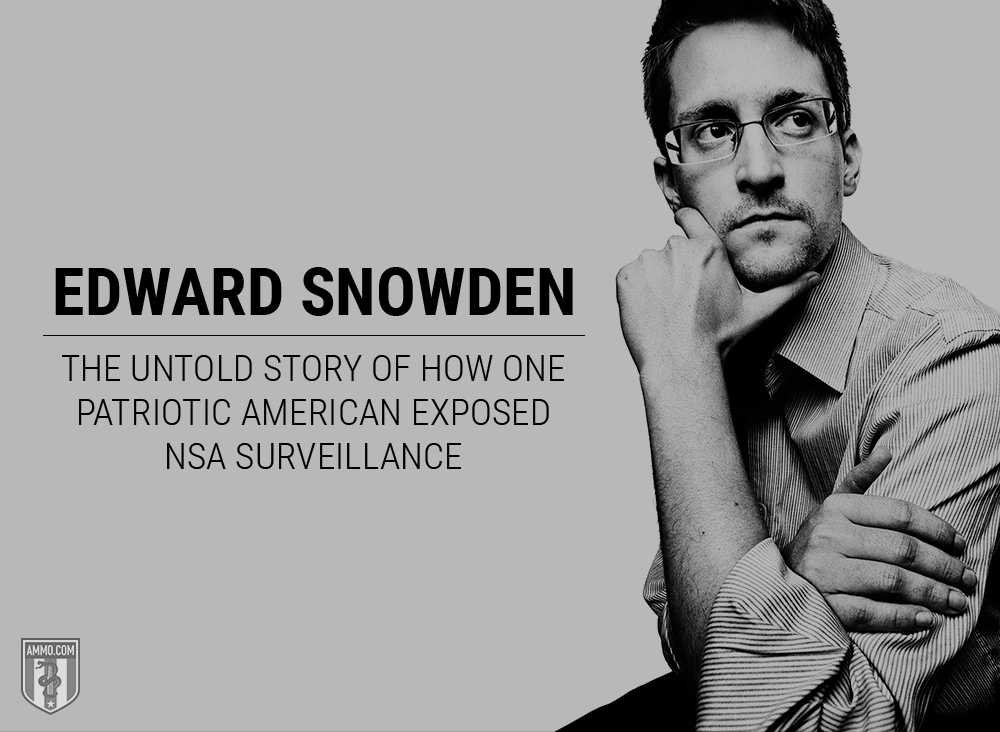 “I can’t in good conscience allow the U.S. government to destroy privacy, Internet freedom, and basic liberties for people around the world with this massive surveillance machine they’re secretly building… the NSA specifically targets the communications of everyone. It ingests them by default… they are intent on making every conversation and every form of behavior in the world known to them.”

Edward Snowden might not yet be a historical figure, but he certainly is a hero. He is the whistleblower of all whistleblowers, the American who blew the lid off of Washington’s spying on private citizens. But Snowden’s leak revealed that it’s not just the U.S. government that is spying on virtually every American – big American telecommunications companies are also helping them to spy as well.

Snowden’s upbringing is largely uneventful. His maternal grandfather was a Coast Guard rear admiral and his father was also an officer in the Coast Guard. His mother was a U.S. District Court clerk. His parents divorced around the time that he would have graduated high school in 2001, but Snowden is a high school dropout. After a nine-month absence due to mononucleosis, he simply took the GED exam and then began taking community college classes. Despite a lack of a bachelor’s degree, he worked at a master’s online from the University of Liverpool.

Snowden had a keen interest in Japanese popular culture, and even worked for an anime company early on in his career.

How Snowden Became a Government Employee

While often thought of as little more than a computer geek, Snowden is in fact a former Army Reserve member and even signed up for special forces training. However, he broke both of his legs in a training accident and was discharged soon afterward. His motivation for joining the military was not to avenge the 9/11 attacks, but specifically the invasion of Iraq and a desire to liberate oppressed peoples in the country. He enlisted in April 2004, and was discharged in September of that year.

In 2005, he then worked at the University of Maryland’s Center for Advanced Study of Language as a security guard. While a training ground for the National Security Agency (NSA), this is not a classified facility. However, Snowden did have to obtain a security clearance to work here. In 2006, he accepted a job with the Central Intelligence Agency (CIA) after speaking to them at a job fair. Known as a “computer wizard,” he lived in a hotel room while he completed his training.

His first CIA assignment took place under diplomatic cover in Geneva, in March 2007. He claims that while there, he saw agents get a Swiss banker drunk, then had him arrested when he drove home. The CIA then, according to Snowden, offered to help him out in exchange for him becoming an informant. These claims are obviously disputed by the CIA.

He then worked for Dell starting in 2009, as an NSA subcontractor, where he was known as a “genius among geniuses.” His time there mainly involved training employees on how to protect data from Chinese hackers.

From NSA Subcontractor to Whistleblower

It was during his time at Dell that Snowden began to become disillusioned with his work. He claims that his breaking point was seeing James Clapper, then Director of National Intelligence, lie to Congress under oath on March 15, 2013 (ironically, the Ides of March). He took his now-famous position at Booz Allen Hamilton in mid-2014, with the explicit intention of finding out just how deep the spying rabbit hole went. He even acted as a bit of an espionage agent while there, obtaining login credentials from over 20 employees by claiming that he needed them to do his job. Snowden, for his part, disputes that he ever did this. However, it has been corroborated by coworkers.

Snowden claims that he repeatedly reported what he considered to be inappropriate use of data collection to no fewer than 10 officials with proper clearance before going public. In an interview with NBC News, Snowden claims he was told to keep quiet about possibly illegal programs. Following the NBC News interview, the CIA downplayed Snowden’s work, describing him as a “low-level analyst.” He also claims that he initially planned to leak the information earlier, but held back to see if President Barack Obama would make any reforms or changes to the program. He made the final decision to leak when he saw that no such reforms were forthcoming.

Snowden entrusted independent journalist Glenn Greenwald to facilitate the leak while reporting for The Guardian. Greenwald championed Snowden’s efforts to expose the NSA, eventually becoming editor of The Intercept, which began as a platform to report on Snowden’s released documents. Together, they worked closely with director Laura Poitras, whose documentary about Snowden, Citizenfour, won an Academy Award for Best Documentary Feature at the 2015 Oscars. Snowden was attracted to both of them due to a Salon article Greenwald wrote about Poitras, who had become a target of the government due to her controversial films.

Since Snowden began leaking information while still under the employ of the NSA, he demanded maddeningly secure channels to leak the information. He claims that he combs through every document that he releases to ensure that it is relevant to his mission of exposing government spying, to protect agents in the field as well as their assets, and to not reveal impertinent information, even when it might be significant news. (Despite his efforts, an intelligence operation within al-Qaeda was exposed due to an improperly redacted document given to the New York Times. It has also been reported by the Sunday Times that due to Russian and Chinese decryption of the Snowden files, operations were forced to change in the field.)

No one knows precisely how much Snowden leaked, but we know that it’s a lot – and it’s believed that only one percent of all documents have been leaked. Australian officials put the number at as many as 20,000 Australian documents. British officials estimate 58,000. The original NSA estimate was between 50,000 and 200,000, but it is now believed that Snowden leaked much, much more – the current Department of Defense estimate is 1.7 million. This includes over 160,000 intercepted emails and text messages, some of which are hundreds of pages long, as well as nearly 8,000 documents taken from 11,000 different online accounts.

It is suspected that further leaks are on the way. The Australian government believes that the worst is yet to come.

Again, no one knows for sure what’s in all of the leaked documents, particularly given that a very small amount of what he took from the NSA has actually been leaked to the public. But some of what we do know – which the intelligence community believes is not the most damning information that Snowden has – is chilling.