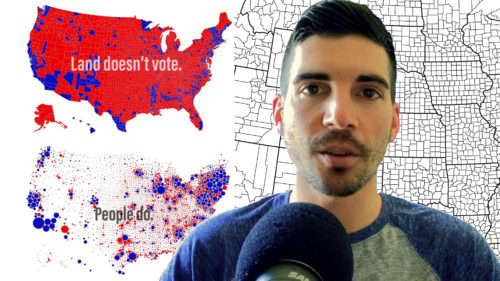 Cities vote differently than rural areas, if you haven’t noticed. Look at any election map, and its mostly red, with little clusters of blue in populated areas.

There is another map floating around instead showing large blue dots for population, with the message that land doesn’t vote, people do. 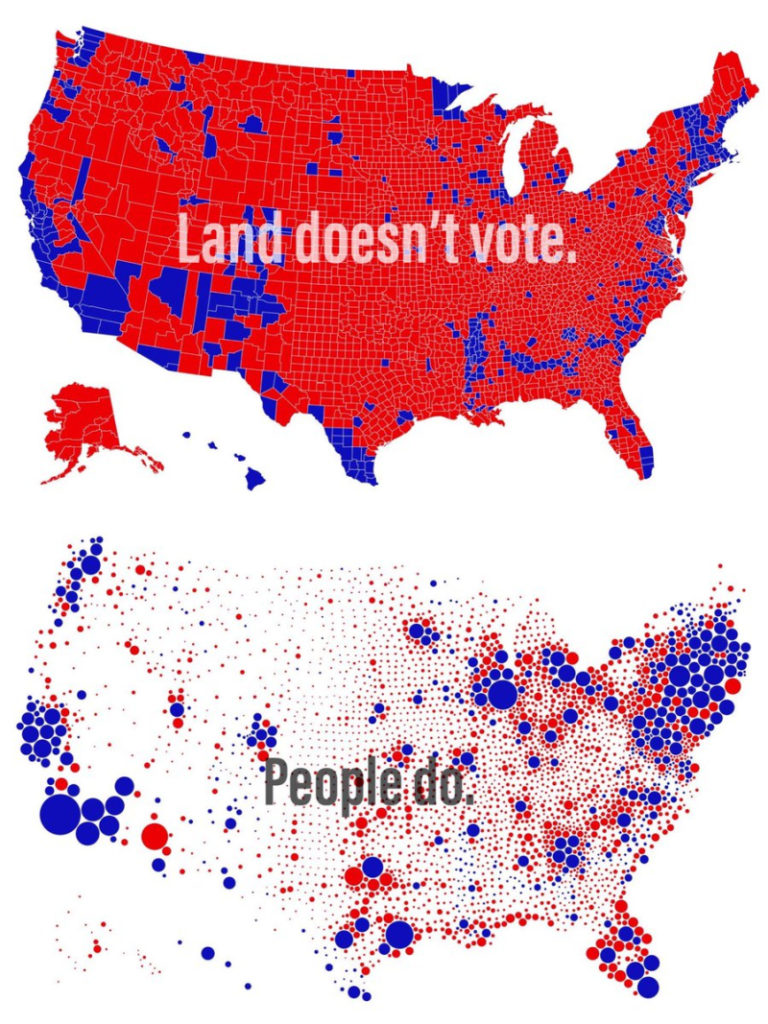 And this is true. But I think the point made by the mostly red land map is that a bunch of city folks are totally controlling how the country folks govern.

I don’t really see rural America clambering to control how cities are run. I do see urbanites demanding control over… well, just about everything.

And in the context of a city, it makes sense to think there needs to be more rules. You’re living in close proximity to a lot of other people. That requires more logistics, and increases the probability of conflict, just based on the number of people you come into contact with.

There is a saying that at the federal level I am Libertarian, at the state level Republican, at the local level Democrat, and at the family level Communist.

The problem comes when you try to take policies that might make sense for a city, and force them on the entire nation.

But still, blue for Democrat and red for Republican are extremely broad– and really bad– indicators for how people want to be governed.

When people feel forced to choose between the lesser of two evils, they will choose the values of whatever party most closely aligns to them.

And yet, Austin, Texas is not run like Portland, Oregon. And Montana has different interests than Tennessee.

It’s actually encouraging to hear more people say that the United States might be better off splitting into two, along major party lines.

Six or eleven separate countries would be even better, along cultural fault lines that run from the beginning of European settlement of North America, as I discuss in my video on the eleven rival cultures which have always fought to control DC and exert their authority on the other regions.

Or maybe 50 countries would be best, one for each state. The smart ones would join open borders, defense, and trade agreements, but make sure NOT to be forced into a federation– this time they should make it clear that they have the free will to leave.

That would ensure any larger political bodies formed would require the consent of the smaller members, and without that consent, the larger body would have no authority over the smaller.

And I certainly think any of this would be a step in the right direction.

But why not 314 countries in the former United States? That’s the number of cities in America with a population over 100,000.

Better yet, why not 3,100 if all the counties formed their own countries, or even 19,502 if every incorporated area in the US, like towns and municipalities, declared independence.

Again, sometimes it benefits a country to be part of a larger federation, and these places could easily team up for certain things like defense and trade if they found such an arrangement mutually beneficial.

It doesn’t have to feel much different than traveling, shipping, doing business, or moving throughout the United States feels does now.

You already have to be familiar with local laws to not get in trouble for certain victimless crimes. Everything from taking your shirt off to smoking a joint will get you very different treatment depending on where you do it.

But the structural changes would make all the difference– we wouldn’t be locked in a battle for control of a centralized power which will force its will on everyone.

Instead, any large centralized governing structure which has something to offer the smaller entities would have to deliver, or lose its members, support, and funding.

And if that sounds too messy and complicated to you, so would, for instance, how the beer supply chain works.

Do you know where the ingredients like hops and barley are grown, and how breweries source them? Do you understand the shipping routes and logistics it takes to deliver the raw materials?

How much do you know about the brewing process, the science, and creating the right taste? Then there is packaging and distribution, marketing, advertising, and so forth.

That is a confusing complicated process as well. And yet the beer gets made with remarkable variety and consistency, always on demand. A bunch of moving parts coordinate with each other, all for mutual benefit, to set up a system that works.

Precisely because it is not centralized and controlled from the top down is why all the participants in the system can work together for the benefit of producers, consumers, sellers, and so on.

And thus, you have more beer options than government options.

Beer supplies are consistent, reliable, they always get where they need to be.

Some of the small brewers grow into big brewers, like Sam Adams. Some of the bad ones go extinct, like Knickerbocker or Falstaff.

Imagine if terrible governments could go out of business.

That’s what happens with a real free market. And actually beer is a perfect example because it used to be highly regulated and there were only a few crappy options. But once the regulations were ditched, the craft beer movement was born– so take that hipster IPA lovers.

The point is, we should be choosing governments the same way we choose beer. I can handle that some terrible brews exist, as long as I am not forced to fund their production, or drink the final product.

If there was a market for government, we might end up with something we actually like– yes and something different for different tastes. I’m allergic to bureaucracy just like some people are gluten intolerant– and there are even beers for them.

So here’s how we turn government into a beer garden.

Democracy sucks, but here’s how to make it suck less.

Democracy is allegedly our voice in government. Do you feel heard? No me neither. But add exit, and that solves everything.

Exit can happen in two ways. You can literally move to a better place, which I’ve already done twice.

The problem is that we have massive government claiming large swaths of land. The US government is even worse in that respect than most, because it claims 320 million citizens as tax cattle who owe Uncle Sam money no matter where they live, work, or earn a living. Just moving outside the US does not divorce you from the IRS.

And even if that wasn’t the case, there are still fewer than 200 countries on earth to choose from. So yes there is already some choice to exit to a better place, but again, you have a better selection of beer than governments.

So here is another way to exit.

Say a democracy votes, and you end up in the minority and you have to accept that fact that other people want to govern differently than you. But what if you still had the option to exit, without moving?

That means you simply mark off a smaller geographical area that decides it will government itself, and have another vote.

For example, the majority of voters in a city of 50,000 people vote for Socialism.

But a 15,000 person suburb doesn’t like that idea, so they vote to form their own Monarchy.

But a 2,000 person neighborhood in that suburb doesn’t like Monarchy, so they form an anarcho syndicalist commune.

And here’s where it gets fun. If just one property owner doesn’t like that new government he is apart of, he can also declare his property sovereign.

Private property itself deserves a whole video, so if you’re interested in that, let me know in the comments.

But essentially private property could be the entirety of the law, and “government” would simply be an open market of contracts and dispute resolution around the concept of self ownership, which is more or less the same concept as private property or life, liberty, and the pursuit of happiness.

But the home would truly be the castle.

Now there’s a lot to unpack here– part of interacting with the other areas of society that benefit you would, of course, require submitting to some of their rules. But you wouldn’t be forced to. You could conceivably be left alone on your land and produce, or probably just have delivered, everything you need.

Victimizing others would still be met with consequences, mirroring common law where the entirety of the law was dispute resolution.

If that sounds interesting, I do have a video which introduces and explores this common law types of justice system.

But I’m not going to get into that here, because this is another concept that sounds super complicated and messy– just like beer production.

But again, we have every reason to believe that all the moving parts forming mutually beneficial transactions to resolve disputes will end up, not with utopia, but with a better system of social organization than we currently have with a top down, centralized power approach.

Okay let’s add one more twist before we wrap this up– who cares if the group you join or create is in the same geographical area as you?

This is the modern age, connected via the internet, why do my neighbor and I have to subscribe to the same government?

Shouldn’t I be able to pick and choose the services I want from a government, and which service provider has the best coverage for the price for my situation?

Neal Stephenson, my favorite SciFi author, wrote a book called The Diamond Age where he talks about “the first distributed government.”

It’s basically like AAA– no matter where your car breaks down, they will still come help you out, which usually means contracting with local repair shops to get the job done.

So in The Diamond Age, when one character robs the wrong person, he is hunted down and taken into custody by other members of the victim’s “tribe” in this case.

To cover their own legal liability as they hog tie him, however, they ask if the suspect has any representation– as in, does he subscribe to a distributed government that would back him up here?

If so, there are sets of rules that most of these legitimate governments agree on before hand to solve disputes peacefully among members of two different distributed governments. The idea is that they represent you fairly, but do protect actual criminals– that’s part of the agreement.

So in the book, this guy does not subscribe to any government, sort of like driving around without car insurance.

Anyway, Neal Stephenson is able to unpack a lot of complicated concepts through fiction, so I certainly recommend reading his books.

Or, for a fictional representation of the type of private governments I am talking about here, check out my own fiction serial called The Gulf. It’s involves a floating city seastead, a corrupt celebrity, a prison island, and of course, a young couple in love.

You’ll laugh, you’ll cry and the first season is out now and completely free to read, listen to, or watch online.