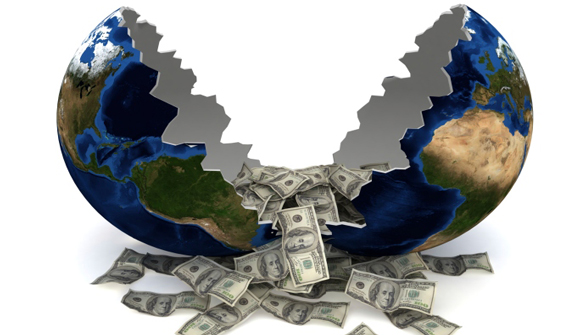 Besieged Globalists Ponder What Went Wrong … Until recently, you didn’t hear people being referred to as “globalist” very often. But in a time of rising nationalism, those who see the upside of globalism have become a distinct — and often embattled — tribe.  – New York Times

No. Untrue. Everything we understand about globalism leads us to believe that its “embattled” nature is by design.

Globalism is itself confrontational and ultimately tyrannical. It cannot be otherwise.

What The New York Times is providing us with here is a meme, propaganda designed to make us believe that globalism has come under unprecedented attack and that globalists are now “besieged.”

We’ve been following this meme for a while now as it proceeds on its inevitable way.

The formal meme – developed by the globalist propaganda machine itself – is globalism versus populism. We’ve been analyzing it for several months.

We’re supposed to believe that Brexit was a great victory for the anti-globalist rump. We’ll wait a while before continuing our celebration, however, as we notice Brexit has not yet come into effect.

Elite memes are part of a larger epochal strategy of directed history. Each meme is directed toward building global governance and making the world a smaller and more organized place.

This particular meme – globalism versus populism – focuses on portraying globalists as wise but misunderstand.

It will likely be going on for a while. Gradually it will build, providing opportunities for globalists to create more formal kinds of communication to counter “populism.”

Last week, the globalists had a big family reunion in New York. The gathering was focused on the United Nations General Assembly, but a growing array of side conferences and summits and dinners also attracted concerned internationalists of every stripe: humanitarians, leaders of nongovernmental organizations, donors, investors, app peddlers, celebrities.

I asked Mr. Clinton after his conference about the challenge of balancing help for Kenya with care for Kentucky, in an age when Kentucky anger threatens to push the United States toward less engagement in foreign problems.

… He sought to deny the inevitability of tension between globalism and nationalism, pointing to the example of a program he recently visited that was building nanosatellites at Morehead State University in eastern Kentucky.

Kentucky benefits from the program, but so, he argued, might Kenya, where the satellites could, for instance, detect and help combat the trade in phony medicines.  “When opportunities are increased in one part of the world,” Mr. Clinton said, “there are often positive effects where you might least expect them.”

We need to watch this meme closely. What’s being suggested here is that there may be more efforts to create dual profit centers – at home and abroad – in order to make clear that globalism can be profitable domestically.

This is likely more propaganda however. The idea behind globalism in its current incarnation is to strip the West of what is left of its prosperity in order to create an international industrial economy. Africa is key to this latter stage of development and the West will subside further as “Africa rises.” The Middle East is being reconfigured as well, though more violently.

Many in the West are determined that good times will rise again and that people will be able to prosper according to their efforts and creativity. But the globalist scheme is all-too-real and surely does not call for the West to regain its former prosperity. In a homogenized world, developing countries will continue to rise while the West will stagnate in order to create true globalization.

The dollar itself is destined to fade away until it is no more powerful than the rest of the IMF’s SDR basket of world currencies. Once the dollar subsides as the world’s reserve currency, the US will not be able to print so much excess money. The wealth in the US will decline as a result.

The US prospered first because it was a free, unregulated country and then, after the Civil War, because it appropriated the world’s wealth via war and its dollar economy. Now in this third stage, the US will not lead the way by such a large margin.

The plan may be to let “populism” blow itself out, eventually, while globalism gradually expands. All of this will be controlled of course, though the debate will seem at least quasi-spontaneous.

Conclusion: The hoped-for result from the globalist perspective is that by letting the “debate” rage and making it seem as if globalism is “losing,” anger and energy can gradually be drained away. Of course it may take a major economic crash and subsequent further depression – plus even another world war – to complete the process. But the plan remains a fully internationalized world, and the globalists don’t intend to lose.