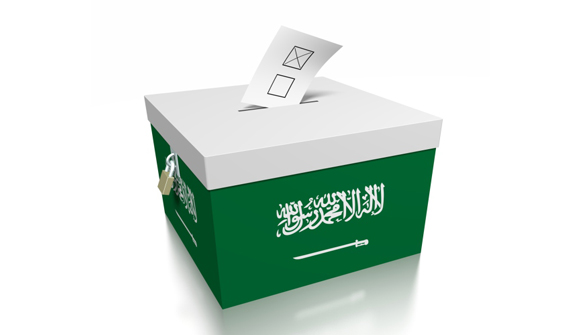 Two women in Saudi Arabia made history last week when they became the country's first registered female voters, according to local media.

"The participation of the Saudi women in the municipal elections as voters and candidates was a dream for us," Jamal al-Saadi, one of the women who registered, told the Saudi Gazette. She added: "I was quite ready for this day."

A handful of women, including an 18-year-old, registered in Medina and Mecca, where the process began early. Voter registration opened up in the rest of the country on Saturday, and candidates can begin signing up Aug. 30. Men and women will vote in separate polling places.

Registration day was a long time coming for women such as Saadi. In 2011, the now-late King Abdullah announced that women would be allowed to vote and run as candidates starting in 2015. Municipal elections, which began in 2005, are the only such contests in the monarchy, and those elected have limited authority. The share of elected municipal council seats will increase from one-half to two-thirds this year; the rest of the seats are appointed. – Washington Post, Aug. 24, 2015

Having the right to vote is significant only to the extent it means you can vote for some meaningful office or issue. Saudi Arabian women can now vote in municipal elections. This is progress for a kingdom in which men, particularly men of the royal family, hold virtually all political and commercial power, but it is far from revolutionary.

Saudi women do have one advantage over citizens of the so-called Western democracies. They at least know their national rulers care little for their happiness and well-being. This is not the case in the United States. Our authorities hide behind a façade of concern for the public while mostly pursuing their own self-interest.

This self-interest of American politicians often coincides with that of the Saudi royals. The Saudis have energy resources while the U.S. has military power. The two ruling classes have traded in both directions for decades. The American lives and treasure lost in the Middle East were transaction costs.

Saudi Arabia's routine disregard for basic human rights forces American politicians to disguise their support for the regime. Those opposed to the Iranian nuclear agreement, for instance, often claim they want to defend Israel. Maybe they do, but their policy goal coincides with Saudi Arabia's goal. They can defend the Saudis while claiming their only goal is to defend Israel.

In fact, American politicians should defend America, not Israel or Saudi Arabia. Those who assume George Washington's and Thomas Jefferson's roles should take the Framers' advice and avoid foreign alliances.

Obligating ourselves to defend other countries is a recent development. These alliances are the foundation for today's leviathan state. Removing them is a necessary step in restoring freedom.