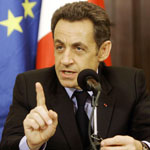 "Estimates of total expected asset write-downs suggest that the budgetary costs – actual and contingent – of asset relief could be very large both in absolute terms and relative to GDP in member states," the EC document, seen by The Daily Telegraph, cautioned. "It is essential that government support through asset relief should not be on a scale that raises concern about over-indebtedness or financing problems." The secret 17-page paper was discussed by finance ministers, including the Chancellor Alistair Darling on Tuesday. – UK Telegraph

Dominant Social Theme: There is reason to worry. But all will be put right … eventually.

Free-Market Analysis: There is a lot of confusion surrounding this story, mostly because the current version on the Telegraph website seems to be missing some paragraphs that were in the original. Here is a comment on Digg regarding the Telegraph story as it was reported as of Wednesday.

"Wow !!! How quickly do they sanitize an article! The original article (updated 1:51 PM GMT) has 3 additional paragraphs that are missing from the 3:50 PM GMT update. I don't think it is coincidence that the paragraphs that give the actual numbers were removed; those numbers were quite damning. The original article stated: "European Commission officials have estimated that impaired assets may amount to 44% of bank balance sheet, The Commission estimates that so-called financial instruments in the 'trading book' total £12.3 trillion (13.7 trillion euros), equivalent to about 33% of EU bank balance sheets. In addition, so-called 'available for sale instruments' worth £4 trillion (4.5 trillion euros), or 11% of balance sheets, are also added by the Commission to arrive at the headline figure of £16.3 trillion." Those kinds of numbers can send the financial world into a full-blown panic!

Apparently, even the anti-EU Telegraph has its limits. Putting a price tag of some US$25 trillion in losses taken by European banks is a bridge too far. But give it a couple of months. We've pointed out in these pages that the overall derivatives exposure for the financial system may be in the area of US $400 trillion – and Lord knows how much of that could sour.

We've also pointed out that is probably why banks are not lending — they're just waiting for the next shoe to drop. It will be interesting to see what explanation the EU spinners come up with now, given the amount of losses that EU banks may be facing. Will they continue to insist it is all mortgage related? It's not. The system itself has failed. Fiat money has collapsed.

As long as we are patting ourselves on the back, we shall go ahead and risk a cramp by pointing out that we also made the following prediction: The total bailout, over time, including central bank monetization, may well be somewhere in the area of US$100 trillion, worldwide. In fact, dear reader, please note that America itself is already up to around US$10 trillion, but we're only a year into this thing. There may be many years to go, and all those dollars, yen, euros, etc., could add up. And most, unfortunately, will only make a bad situation worse. And their solution: Print more. Our solution: employ human action and transfer out of paper money into physical gold and silver for wealth protection. And while you're at it, you may as well profit from this fiat money mess by owning shares in some well positioned mining companies – they will likely provide dramatic growth for the wealth building side of your ledger.