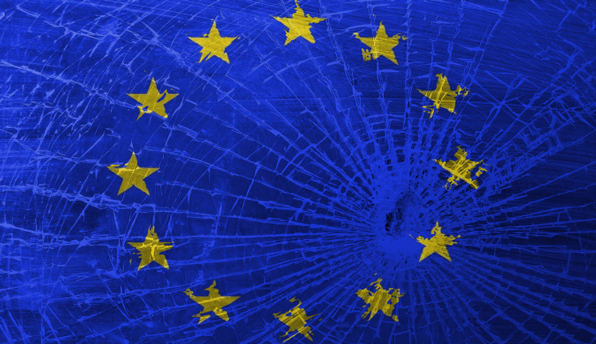 STAFF NEWS & ANALYSIS
Europe's Unraveling Is Not Political but Technological
By Staff News & Analysis - May 22, 2014

Europe's centre crumbles as Socialists immolate themselves on altar of EMU … Francois Hollande must be willing to rock the European Project to its foundations, and even to risk a rupture of the euro. This he cannot bring himself to do The ECB is once again sitting on its hands, trifling with deflation … By a horrible twist of fate, Europe's political Left has become the enforcer of reactionary economic policies. The great socialist parties of the post-war era have been trapped by the corrosive dynamics of monetary union, apologists for mass unemployment and a 1930s deflationary regime that subtly favour the interests of elites. – UK Telegraph

Dominant Social Theme: What is going on in Europe makes no sense.

Free-Market Analysis: This article in the UK Telegraph points out succinctly the problems faced by the EU but spends a good deal of time wondering why European leaders like Francois Hollande are pursuing policies that are giving rise to extreme opposition and further damaging economies.

Basically, the article, like others by this author – Ambrose Evans-Pritchard – suggests that what is necessary to cure European economies is a great deal of money printing. In this sense, Evans-Pritchard reveals himself as an ordinary Keynesian despite his twisting and turnings in past articles. He doesn't want to be known as Keynesian, though he is.

He wants to be considered as something else – it is not clear what – but articles like this one provide us with a perfectly straightforward Keynesian analysis. He is incredulous that various governments, especially Hollande's, are not printing money in abundance and equally astonished that they have adopted the concept of "austerity" that further starves the economy of currency.

One by one, they are paying the price. The Dutch Labour Party that fathered the "Polder Model" and ran Holland for half a century has lost its bastions of Amsterdam, Rotterdam and Utrecht, its support dwindling to 10pc as it meekly ratifies austerity policies that have led to debt deflation and left 25pc of mortgages in negative equity. Contractionary policies are poisonous for countries leveraged to the hilt. …

"The Socialist Party has never believed in the euro and we don't believe in it now. We must therefore stop offering up ever more sacrifices in order to maintain it," said Dennis de Jong, the party's leader in Strasbourg. He calls for a "Plan B" to dismantle the currency union in an orderly fashion, with capital controls if need be. Each country is sui generis.

The Panhellenic Socialist Movement (PASOK) that steered Greece to democracy after the colonels is down to 5.5pc, a dead shell displaced by the hot-headed Syriza party of Alexis Tsipras, now leading at 25pc with vows to tear up Greece's EU-IMF Troika Memorandum and stiff creditors. PASOK deserves its annihilation. It conspired in the backroom coup of November 2011, agreeing to EU demands to overthrow its own prime Europe's centre crumbles as Socialists immolate themselves on altar of EMU

The mystery is why a French Socialist president with a parliamentary majority should so passively submit to policies that are sapping the lifeblood of the French economy and destroying his presidency. Francois Hollande won the presidency two years ago on a growth ticket, vowing to lead an EMU-wide reflation drive that would lift Europe out of slump. He promised to veto the EU Fiscal Compact.

He asked to be judged on his record in "bending the curve of unemployment", and to his chagrin the people are holding him to his word. The jobless rate has risen from 10.1pc to 10.4pc (Eurostat) since he took office. The economy shed a further 23,600 jobs in the first quarter as GDP growth fell back to zero.

… The French socialists thought they had nothing to fear from the rise of the Front National, the one party prepared to tap into the welling fury of La France Profonde, pledging to restore French sovereign control over all that matters in the nation, and ditch the euro as the first order of duty. They thought the Front would peel off votes from the Gaullistes and split the Right. It is ripping into their own working class strongholds with near equal force.

They underestimated Marine Le Pen, now leading the Euro polls at 24pc. The socialists have slipped to third place. She has outflanked them with her brand of "Left Le Penisme" – or the Left-leaning side of Charles de Gaulle, as she once old me – a tooth and claw defence of the welfare state and the sacred Modèle Français. They have no answer to her attacks on "senseless austerity" and the "mad monetary policies of the ECB" that are hollowing out the industrial core of France, or to her taunt that the EMU project has become coterminous with mass unemployment, because they are all true.

From the author's point of view, the policies being followed across Europe are ones that are spawning a "rightist" movement. Indeed, this is standard fare. Whenever economic issues loom large in Europe the old right wing monster is released into the pages of the mainstream media.

It matters not whether the organizations in question are "fascist" or right wing; they will be portrayed that way. And ironically, the real fascism is already rooted in Brussels where titanic corporations work hand-in-hand with EU officialdom to spawn ever more authoritarian regulations.

The reason Evans-Pritchard is puzzled by the actions of Hollande and others in Europe is because the power probably does not lie with them but lies in the City of London and elsewhere where the global elite first created the EU and then foisted the euro on it to ensure that further consolidation would be necessary as a reaction to euro chaos.

Well … chaos Europe has had in full measure. But the political union seems to us to have made scant headway. This is in large part because people are already aware of their manipulation thanks to the modern Internet era and want little more of the centralization that is responsible for so many troubles already. That's surely one reason why the euro and even the EU itself are increasingly unpopular throughout Europe.

Nonetheless, the meme continues to carve itself into the mainstream media discussion about Europe. The various parties now being created in Europe as a reaction to the economic disaster are anti-euro and anti-EU but are painted inevitably as racist and intolerant. This they may or may not be, but the media will portray them that way no matter what.

We also know that at least some of these parties are actually supported by the power elite that stands behind Brussels and a greater Europe. If one creates a bogeyman, it can place the current power structure in a better light.

Not that the current structure deserves it. It's made up of political and financial hacks that are devoted to a centralized Europe not for the greater good of the many but to benefit their own pockets and careers.

Ultimately, the EU and the euro are facilities of globalism and those globalists that have pursued the project for so long are loath to let it die. It is important, even integral to their plans for worldwide political and socio-economic control.

This is the real reason that Hollande and other leaders do not break away from Brussells's destructive policies. They don't because they cannot. They are not, in fact, representing their citizens but are evidently beholden to the same tiny elite that created the EU to begin with.

Presumably, Evans-Pritchard knows this but can't or won't present this reality in its baldest terms. Nonetheless, the increasing decline in EU's economies bodes ill for the longevity of the EU experiment.

It is the Internet itself that is making it difficult for the power elite to control the narrative the way it did in the 20th century. And this is dangerous to the current social stability, what is left of it, not only in Europe but throughout the West.

For citizens, savers and investors, this has profound implications – as we often point out.