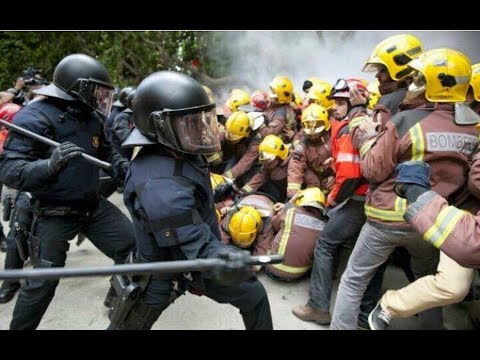 STAFF NEWS & ANALYSIS
Everything You Need to Know About the Catalan Independence Referendum
By Joe Jarvis - October 05, 2017

It’s all illegal! That’s Madrid’s position on the referendum in Catalonia. Of about 5.5 million eligible voters, about 2.4 million chose–or were able–to cast ballots. 90% of them voted in favor of independence from Spain.

Spanish courts have ruled, and leaders have repeated, that the country’s Constitution does not allow a region to separate. European Union courts have echoed this position.

Of course, Spain’s response to the vote was completely legal. This involved sending police into the region to close polling stations, seize ballots, and deliver some old-fashioned fascist beatings. But it was all to protect democracy, naturally.

Through their actions to stop the referendum, they showed exactly why Catalonia would want to be independent of Spain.

Further proving the independent nature of the region, Spain had to send in an occupying force to suppress the referendum and attack anyone who tried to vote.

In a sign that Spanish police reinforcements sent to Catalonia might be there for an extended stay, an army logistics unit sent bunkbeds, kitchens and showers to an army barracks near Barcelona in case the police need to use the military base at some point, a Ministry of Defence spokesman said.

Some police staying at hotels in Catalonia have come under pressure from local residents to leave.

Police officers from inside the region of Catalonia would not follow the orders of Madrid.

Police from the region will actually be prosecuted by the Spanish government for inaction. They refused to break up peaceful protests and generally stood down rather than follow orders to brutalize anyone attempting to vote.

Meanwhile, Catalan firefighters lined up to form a human shield to protect protesters from the invading police force. 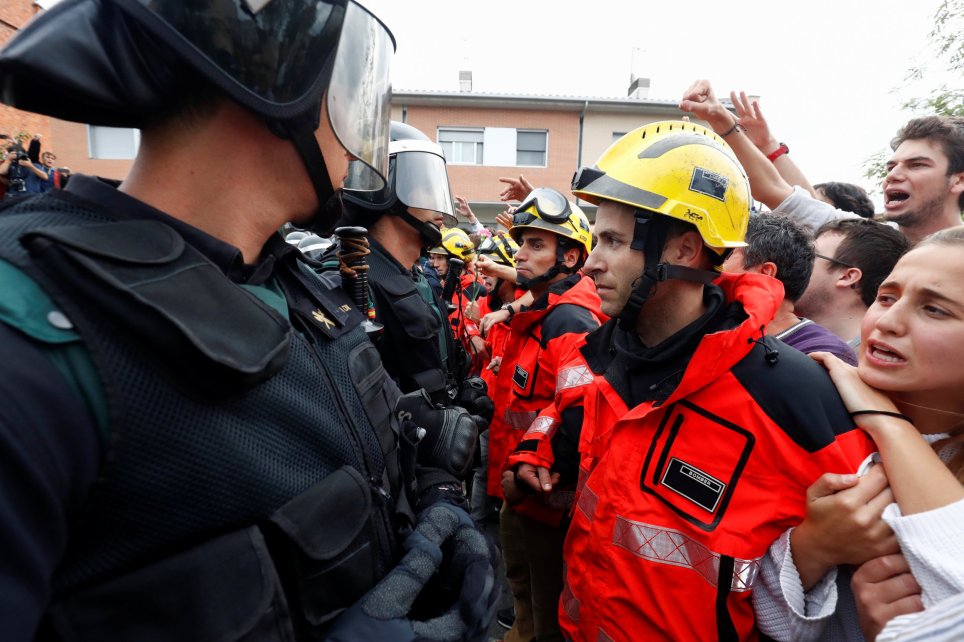 Media present for the vote are reporting that journalists in the area have been suppressed by the government as well.

To summarize, it started with pro-referendum Catalan politicians being arrested. Then an invading force of police suppressed the right of Catalans to vote, attacking and injuring almost 1,000 innocent citizens and non-violent protesters. The police shut down hundreds of polling stations, seized ballots, and attempted to shut out media coverage of their violence.

The government of the region which pressed ahead for the region’s right to self-governance, have the backing of a vast majority of voters who were able to express themselves at the polls. The local police and firefighters are standing behind the people of their region and defying Madrid.

It is unclear how many more people would have cast votes if the government had not responded so violently. We also don’t know how many ballots that were cast were seized and destroyed by Madrid. But since over 42% of eligible voters managed to get their ballot in, and since 90% of those voted for independence, we can say with certainty that at least 38% of eligible Catalan voters support the right to rule their own region.

It is worth noting that many Catalans against independence boycotted the vote.

If Catalonia had no reason to secede before, now they have plenty.

Just look at the pictures and video coming out of how the police are treating the Catalans. You see bloody and battered elderly. You see women being thrown to the ground and tossed aside by police in riot gear. You see men being beaten and dragged by officers. 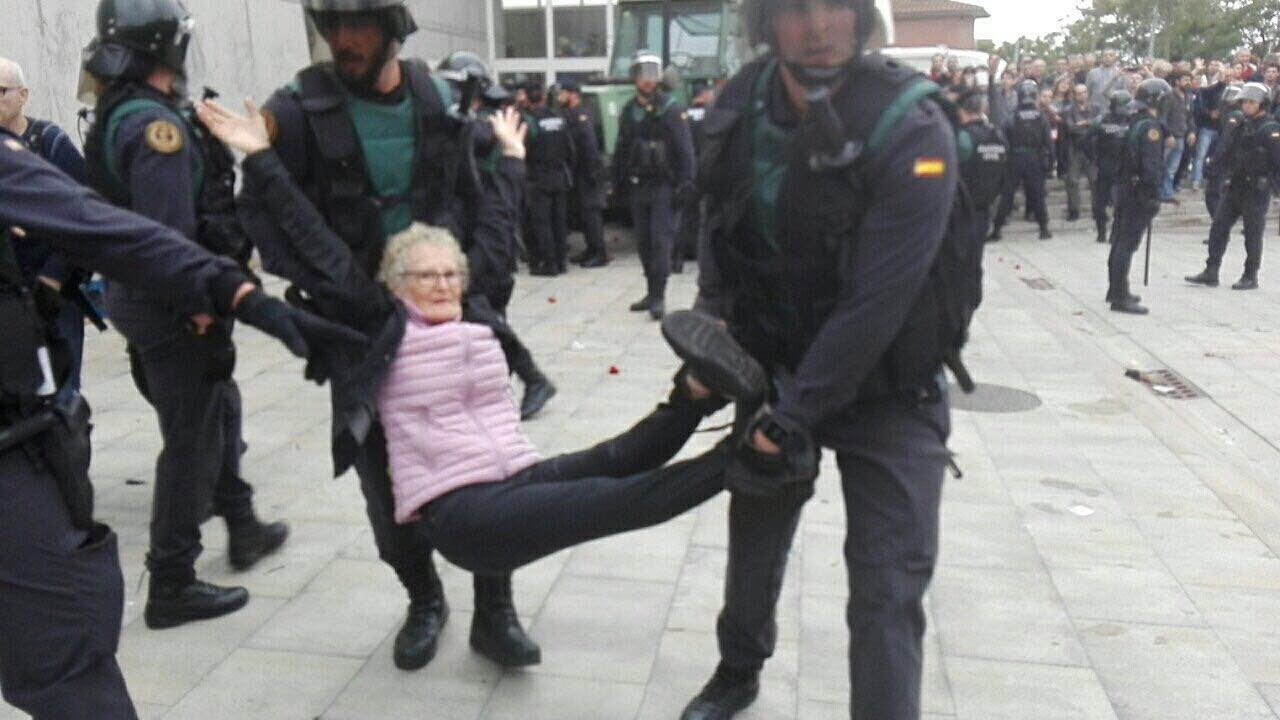 In the following clip, you can see police breaking into a polling place in order to stop voters. The police handing out beatings and breaking down doors are acting legally. The people voting to disengage from the government these forces represent are acting illegally.

Who cares what the law has to say? The people of Catalonia did not agree to the Spanish Constitution. And if Spain believes in democracy, as they claim, then why wouldn’t a region be able to vote itself independent?

You always hear talk of law, and courts, as if that meant anything. Spain wants them to follow a legal procedure if they want independence because it guarantees that they will never get it!

What is the obsession with having to play by the enemy’s rules?

You want to look at the real rule of law, look at the police swarming into Catalonia and attacking the people. The clip above shows how laws are ultimately enforced, with violence. There is nothing right or moral about the law. Law is written by the government to enforce their interests. It has nothing to do with rights or general human decency. It has nothing to do with resolving disputes, as common law does. Statute law only creates conflict, instead of letting two disagreeing parties go their separate ways.

Catalonia is paving the way for other regions to seek the same independence. It is the first step in a process of self-governance. The smaller the governing structure, the easier it is to change or resist.

It is not hard to see that central governments behave like abusive partners, threatening and carrying out violence when their partner tries to leave. Catalonia accounts for 15% of Spain’s population and 20% of its GDP. It is a net payer into the country’s coffers.

And what do they get in return for being Spain’s cash cow? They get to fund the police who are sent in to shut them up when they start to exercise their rights.

All being said though, how can a region expect to be independent if they cannot defend themselves against outside aggression?

I hope that in these modern times the demand for peace is enough to defend them. I hope that Catalonia does not have to start killing the cops who are occupying the region to subjugate them. I want to see Spain retreat not because of a violent resistance, but because of a peaceful refusal to accept such barbarism in the 21st century.

As divorced as governments are from the pressure of the market, there are similar effects that can take place through public opinion, much like boycotting a business.

When businesses mess up, they have to apologize and quickly correct their actions. Usually, someone high up gets fired, and they retrain all the lower personnel involved. If they don’t make a serious effort at reform, their business will lose customers who do not have a stomach for whatever negative actions they took.

And it does appear that Spain’s economy is already taking a hit.

The constitutional crisis in Spain, the euro zone’s fourth-biggest economy, has shaken the common currency and hit Spanish stocks and bonds. Madrid’s borrowing costs have risen sharply and reached their highest since March on Wednesday.

The cost of insuring against potential losses on Spanish bank debt and Spanish, Italian and Portuguese sovereign debt has also jumped, suggesting an impact on the wider euro zone.

I would expect these actions would harm tourism to Spain. If the conflict becomes too costly, I would expect Spanish voters to become angry at those in charge, like the Prime Minister.

Officials from Catalonia, as well as the European Union, have called for Spain to open up a dialogue with Catalonia. While the Catalan politicians say they are willing to negotiate, Spain says they are not. Prime Minister Rajoy says he will not sit down for negotiations until Catalonia returns to the law. That is the same law that allows his forces to attack and terrorize the Catalans.

Movements like Catalan independence are great for freedom because they give people more options. The easier it is to move to a better jurisdiction, the more responsive governments must be.

That is what made Europe relatively free, compared to the East, in the first place. Many small countries had to treat their citizens relatively well or lose them to a competing nation closeby. These countries had to allow their people the freedom to produce, to learn, and adopt innovation, or suffer at the hands of their technologically advanced neighbors.

195 countries do not provide enough options for a world population approaching 8 billion.

Catalan politicians are now pressing ahead to get the parliament of Catalonia to officially declare independence. In response, Spain has threatened to resolve the region’s parliament.