All these newspapers used to have foreign bureaus. Now they don’t. They call us to explain to them what’s happening in Moscow and Cairo.

Most of the outlets are reporting on world events from Washington. The average reporter we talk to is 27 years old, and their only reporting experience consists of being around political campaigns.

That’s a sea change. They literally know nothing.

The news simply quotes the politicians, believes the names of bills will become reality, and buys hook, line, and sinker what the spy-masters in the Pentagon tell them.

And here we are again, being sold a justification for yet another war in the middle east.

The US government claims that Iran attacked a Japanese shipping vessel with mines. Iran claims this is a lie.

I’m not going to pretend I know the truth, even though my initial reaction is always suspicion. Much like the reports that Assad attacked his people with chemical weapons in Syria, it is hard to see what Iran would gain from attacking the vessel.

The events just seem too perfect, justifying what America already wanted: to go to war.

It doesn’t even have to be an American-orchestrated false flag. It could simply be a misrepresentation, like the Gulf of Tonkin incidents which escalated the Vietnam War.

But most Americans would never even hear about the Gulf of Tonkin if it wasn’t for fake news sites like Babylon Bee. 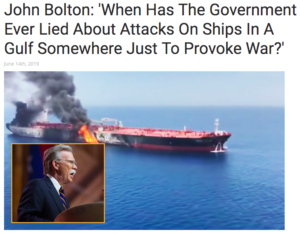 The headline reads: John Bolton: ‘When Has The Government Ever Lied About Attacks On Ships In A Gulf Somewhere Just To Provoke War?’

Then it offers a fake quote from Trump’s National Security Advisor John Bolton:

“When has the government ever lied about ships being attacked, say in a gulf somewhere, for the purpose of getting involved in another foreign conflict?” he asked. “Can you point to a single time a lie about a minor attack resulted in a major unnecessary war? No, I didn’t think so,” he said.

“These attacks in the Gulf of Tonk—er, I mean, the Gulf of Oman, excuse me—were definitely carried out by Iran, and we need to invade immediately before people start doubting the narrative.”

Most Americans might not know who notorious warmonger John Bolton is.

Bolton’s been creeping around DC since the Nixon administration. He was involved in the Iran-Contra scandal and was instrumental in spreading the lies about weapons of mass destruction in Iraq.

In 2002, he gave a speech revealing his war wish list which, surprise surprise, included Iraq, Iran, Libya, and Syria (as well as North Korea and Cuba).

What else could fake news websites help us learn about John Bolton and the American policies he has contributed to?

Here’s one from the Duffelblog: Bolton cites his avoiding war in Vietnam amid criticism that he’s pro-war.

“If I like war as much as you all say I do, wouldn’t I have jumped at the chance to take part in one, instead of joining the reserves to avoid being deployed?” Bolton challenged reporters during a press conference on Tuesday.

Bolton went on to reference his distinguished record of not going to war, sources said. He presented reporters with a copy of his Yale 25th Reunion Book, in which he wrote that he avoided service in Vietnam because he “had no desire to die in a Southeast Asian rice paddy.”

That last quote from the yearbook, is actually 100% true, by the way.

The classic fake news site The Onion also took the opportunity last month to hint at the truth, in a fake sort of way, with the headline: Bleeding John Bolton Stumbles Into Capitol Building Claiming That Iran Shot Him. 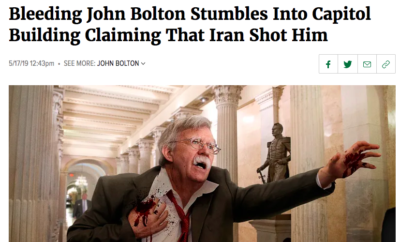 And finally, one more from Babylon Bee: 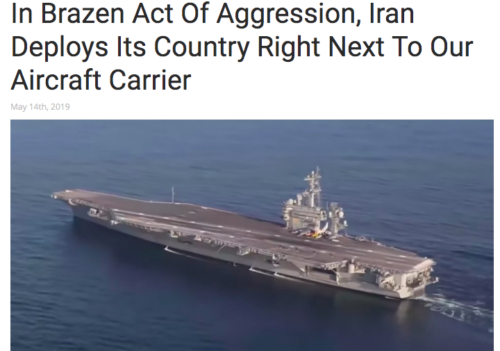 If you want the truth, you may be better off getting your news from fake news websites.