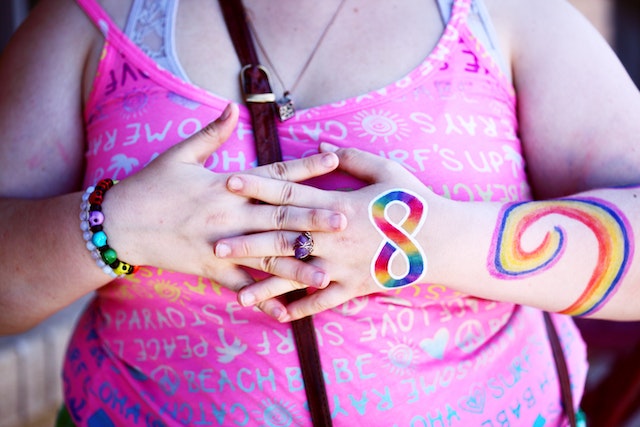 Professional victim Twitter fativists and woke lifestyle bloggers, apparent masochists, provide an endless source of entertainment at their own expense as they continue their Quixotic quest for #fatacceptance.

Land whale blames society for not fitting on waterslide

It’s society’s fault that she doesn’t fit in armchairs and is too big for waterslides pic.twitter.com/0TftrMBiXU

This was probably a legitimate safety issue at the pool or waterpark or whatever establishment where this occurred. The ownership presumably was unwilling to risk a lawsuit just to accommodate their single morbidly obese customer for the sake of inclusivity.

If she had been allowed on the ride and injured herself or others as a result, we all know she would have found a fat rights lawyer to blame the waterslide operator in court proceedings.

A young Indian lady, through tortured logic, has determined that her current state of obesity in 2022 can be traced back to the colonial-era Dutch East India company (the whites) who grew tobacco and opioids on the Indian subcontinent which somehow “destroyed the fertility” of her country through unexplained mechanisms.

It’s white people’s fault, explicitly, that India moved to a grain-heavy diet and went through multiple famines, because famines never occurred before the white man’s global conquest. After a famine in 1943, she claims, the white demon-induced disaster caused Indians to “adapt to survive on lower calories” and “biologically programmed” them to hold on to fat.

“White people are the reason I can’t lose weight,” she concludes, and makes an obscene hand gesture to signal her disgust.

Tiktoker claims the reason she’s fat and can’t lose weight is because of white people pic.twitter.com/E67dnJqyL1

The thing is: she has a point about the monoculture of food products in industrialized farming and their negative impacts on the land and people, as well as the bits about grain-heavy diets. Blaming white people, though, is unneccesarily reductionist and detracts from any serious points she might have made.

Having a preference for dating thin people is ‘fatphobic’

The LGBTQ+++© social engineers claim that favored sexual identities and orientations are unquestionable objective reality and not a socially conditioned “preference.” The exceptions, though, are apparently men’s attraction, or lack thereof, to trans women and fat women.

Having a preference for dating thin people is fatphobic pic.twitter.com/XEZxvYSN7o

A lady on the higher end of the BMI spectrum, presumably with recent negative dating experiences, has determined that the reason not enough men are attracted to her jelly rolls is that society has conditioned them to hate fat people, not as a natural revulsion to obviously unhealthy bodies unfit for reproduction. Men, she claims, don’t like dating fat women because they are afraid of what their friends might think.

Notice how none of the reasons have anything to do with her lifestyle choices. This conveniently means, continuing on the theme here, that it’s society’s fault that she doesn’t pique men’s sexual interest. Meanwhile, she doesn’t have to change anything to fix the situation, like cessation of her Dorito’s™ binges. 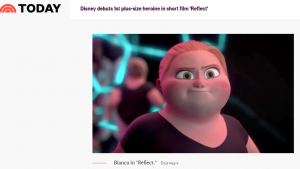 “Disney’s new short film ‘Reflect’ promotes body positivity and a healthy self-image through the main character, Bianca, its first plus-sized heroine… The short was introduced by its director, Hillary Bradfield, a Disney Animation story artist who’s behind ‘Frozen 2’ and ‘Encanto.’ She said she wanted to tell this story because, ‘I feel like I’m a very body positive person in principle. But when it’s on a personal level, it’s a lot harder to be body positive.'”

Liberal women in the arts, we increasingly see, work out their personal issues in the public square by propagandizing the youth to celebrate their unhealthy habits and deviant proclivities. The world must cater to them. If it doesn’t, they invent an –ism to assign to bigots, who are usually white, cisgender, heterosexual Christian men or some combination thereof.

This requires less physical effort and provides more social virtue points that actually eating responsibly and getting those jiggle thighs churning on a bicycle.

Delusional butterball: ‘My toxic trait is that I feel like a literal God when I look this hot’

The Tweet got deleted but I grabbed a screenshot first fortunately. 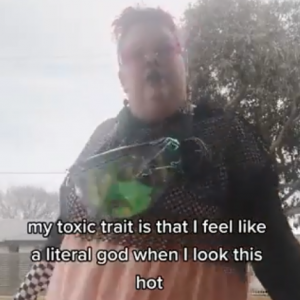 My wife, who is actually attractive, responded when I showed her this with “I wish I could be that self-confident.”

In reality, this is likely just an internet flex — overcompensation for her total lack of self-confidence. Normal women with healthy self-image (and body-mass index) don’t make self-indulgent, narcissistic TikTok videos such as this.