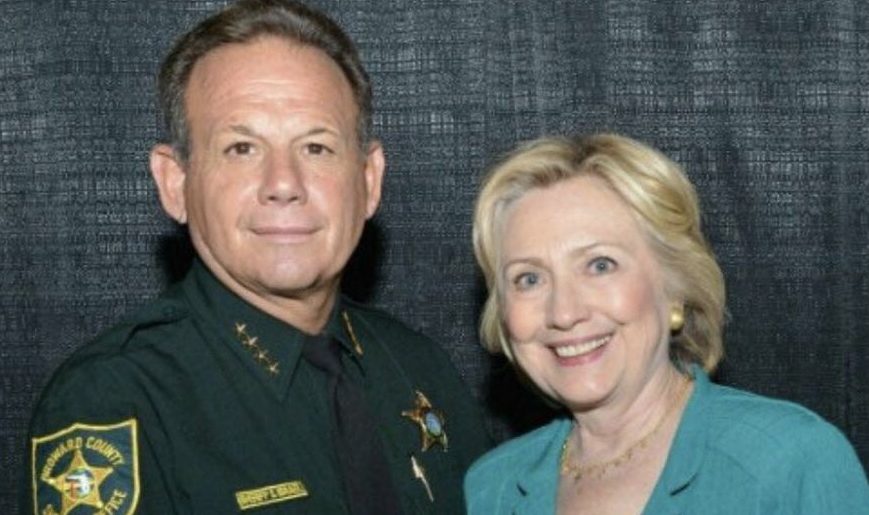 STAFF NEWS & ANALYSIS
FBI and Sheriff Either Failed Miserably Before Parkland Shooting… Or Much Worse
By Joe Jarvis - February 27, 2018

We’re supposed to trust the government to keep us safe. But the two main law enforcement units that should have protected students against the Parkland shooter failed miserably.

There were calls about violence, including the shooter putting guns to people’s heads. Deputies visited many times after concerned friends, family, and strangers called. The suspect once called the police on himself!

Then a sheriff’s deputy failed again by refusing to go into the school during the shooting and engage the shooter. He was on the scene. He knew what was happening. And he shirked his duty.

These are the people who will protect us if we are disarmed.

The old cliché is that when seconds count, police are just minutes away. And even then they might not help you. These law enforcement show exactly why we can not give up our personal ability to defend ourselves and our loved ones, in favor of government agencies.

The Worst of Politics

Sheriff Scott Israel’s department mishandled the numerous alerts about the shooter. He hired the deputy who cowered outside rather than confront the shooter. Now four other deputies are reported to have arrived on the scene while the shooting was ongoing, and likewise did not intervene.

Scott Israel wants to blame the NRA when it was his department that failed to prevent and then failed to stop this shooting. Why is he being paraded around the news as if his opinion on guns matters? He is the poster child for why you should never have to depend on law enforcement.

This man is a typical politician. In fact, he was on the Florida Leadership Council of Hillary Clinton’s 2016 Presidential Campaign. 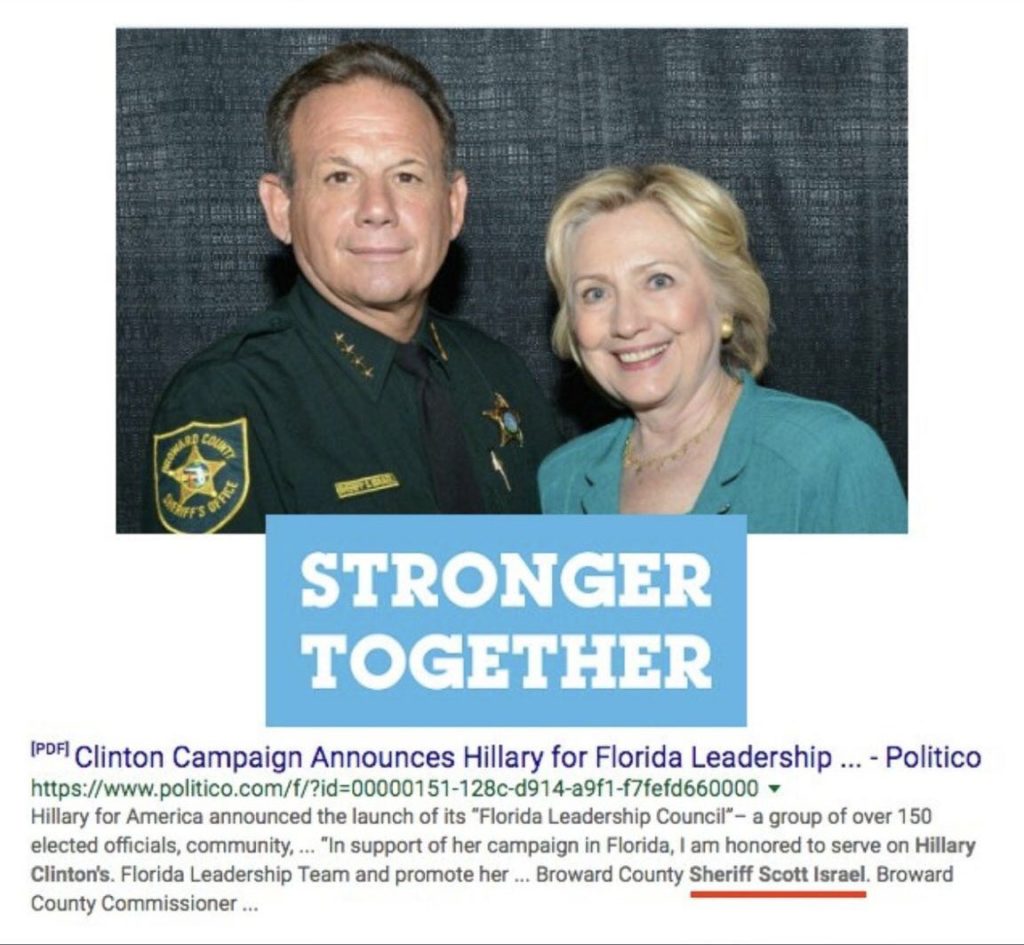 Scott Israel is the epitome of a political schmuck. He was a Republican but ran for Sheriff as a Democrat when that seemed like a better way to get elected. He shows us that political parties are two arms of the same beast.

Once he got elected, he hired his campaign manager’s husband as an “outreach manager” for the Sheriff’s Department, which pays almost $80,000 a year. In total, Israel handed out almost $400,000 in publicly funded salaries to political supporters. These “public outreach” jobs are responsible for social media posts and other pro-department propaganda. They form a tax-payer funded re-election arm of the Sheriff’s office.

Israel still complained that he didn’t have the funding to keep a murder suspect from escaping the county courthouse in 2016. But he did have the funding to hire political supporters. Maybe that is why the deputy on the scene was more equipped to campaign for office than provide public safety.

The shooter made actual threats. He reportedly put guns to people’s heads multiple times. Those are actual crimes which if charged and convicted, would have disqualified him from legally purchasing a firearm.

Subjectively “crazy” people or gun obsessed people should obviously not be involuntarily committed, or stripped of their rights. But this shooter victimized people. He threatened violence against other people. He had violent altercations which were never followed up with criminal charges. That is not the same as arbitrarily restricting anyone labeled mentally ill from legally owning guns.

Scott Israel’s politicized department dropped the ball on addressing actual criminal activity of someone who went on to do much worse.

But instead of addressing the utter failure of the law enforcement, some people want to make sure they are the only ones equipt to handle threats like these. That is insanity. The shooter would have already been barred from owning guns if law enforcement had done their jobs.

But Sheriff Scott Israel was too busy quoting villains from Game of Thrones, to demonstrate the point that he didn’t care what the public had to say about his corrupt hiring practices.

The Sketchy FBI is Always Lurking

On January 5, just a month before the shooting, a woman who knew [the shooter] called the FBI tip line and said ‘I know he’s going to explode. ‘She said her biggest fear was that he might resort to entering a school and just start ‘shooting the place up.’

One month before the shooting, the FBI gets this warning. They had already been tipped off to an online comment from someone with the same name who described himself as a school shooter. Authorities had also previously been told by a neighbor that the shooter talked on Instagram about plans to shoot up his school.

So is this a case of FBI incompetence? They utterly failed to address the threat. They could have made a couple phone calls to local authorities and found out this was someone worth looking into.

Or Worse… maybe they did make some calls.

The FBI routinely grooms people to become attempted-terrorists. The when they thwart the attempted attack, which they helped plan, they can say, look, we stopped a terrorist attack!

First, they identify someone who already holds radical views. A good candidate is someone who would be easily influenced, and generally has some sort of mental deficiency. They go for someone that is a bit crazy, but would not necessarily want to, or be able to, become a terrorist.

Then the FBI uses an undercover agent or informant to radicalize the target, feed into their paranoia, and eventually pitch the idea of a terrorist attack. Sometimes they even offer them money to participate. The FBI then provides them with fake explosives and arrests them at the scene of the alleged plot.

Of course, the planned attacks would have never materialized without FBI agents radicalizing a subject, planning the attack, and providing the subject with fake explosives. This is not a conspiracy theory, it is well documented that a majority of the terrorist attacks the FBI thwarts are actually entrapment operations.

Is it so much of a stretch to think they would radicalize someone for political purposes, and then just let a tragedy happen?

We know that the FBI will pursue investigations for political purposes. We know that they will harass citizens and hide evidence for political purposes. The entire history of the FBI is marred by corruption and overreach. And there is compelling evidence, including the outcome of a civil trial in U.S. courts, to suggest that the FBI may have had a hand in the assassination of Martin Luther King Jr.

What Could Have Happened

I’m not saying this is what happened. All I am saying is that the following would meet the FISA court’s standard of evidence to investigate further.

We have the FBI who was contacted at least twice about the shooter and did not follow protocol. We have a Sheriff’s department who never charged the shooter with a crime despite dozens of incidents. We have a politically motivated Sheriff running that department, who has met Hillary Clinton on numerous occasions and volunteered in a leadership position on her 2016 campaign.

Then after the shooting, the media trots out the victims in a coordinated campaign for gun control. Sheriff Scott Israel takes part in throwing blame on guns and the NRA.

[Refer to the post last week about how to spot “fake news” and propaganda. If something in the media seems coordinated, it is.]

And the champion of their gun control efforts is David Hogg, the son of a former FBI agent. He quickly becomes an activist, not just for gun control, but commenting on all sorts of political issues. He is against Trump, against the NRA, but happens to support Sheriff Israel, despite the blatant failures of his department.

He also doesn’t want to blame the FBI for botching the tips they received. After all, he has seen how hard his dad worked. And the media provided supplemental information about his dad. He used to collect teddy bears and hand them out to refugee children–seriously.

We know the FBI has a contingent of Clinton supporters and relied on the Clinton Campaign for some information they presented to the FISA court against Trump allies.

The only way the shooter was not on the FBI’s radar is if they were grossly incompetent. He was definitely known well by Sheriff Israel and his deputies. But why wasn’t he ever arrested and charged for his many crimes of violence?

It is possible the FBI did look into the shooter and decided he was a good candidate for one of their usual operations. They could have teamed up with Israel’s sheriff’s department to make sure they didn’t place any roadblocks in the way–like criminal charges–to the shooter eventually shooting up the school.

We don’t know who the shooter was talking to online, but it would be easy for an FBI agent to encourage his violence, and nudge him towards committing the act. The shooter would never know himself that he was being nudged towards action by an undercover agent.

They had the infrastructure and supporters in place in order to take control of the narrative directly after the shooting. Sheriff Israel gets national exposure–he probably didn’t see this backfiring on him, because the public isn’t supposed to question victims or anyone that speaks for them. And another FBI agent gets to give his son some media attention, and kickstart his career in activist journalism.

The Deep State/ Clinton Crime Family get to push their gun control agenda. They also get to criticize Trump and his NRA supporters for being (relatively) pro-gun. And finally, the shooting distracts from the mounting accusations against FBI corruption and collusion with the Clinton Campaign.

And I am not even convinced the FBI necessarily purposely ignored the warning signs, or further encouraged the shooter in some way.

All I am saying is that there is enough weird stuff going on to question it. With this amount of strange connections and the coordinated media response, people questioning the official story should not be shamed and silenced.

The Right to Question

Governments have done horrible things before. Read any history book. It is full of murderous plots, and traitorous deceits.

The Joint Chiefs of Staff even suggested a false flag called Operation Northwood to President Kennedy, who vehemently objected. And we know what happened to him.

We also know the media has long been in the pocket of the Deep State, starting with Operation Mockingbird. They hired journalists and broadcasters to parrot CIA lies.

I am not claiming with any authority that some kind of conspiracy happened at Parkland. But I am not just going to sit back and accept the government’s and mainstream media’s narrative of what happened, especially when they are clearly pushing an agenda based on the tragedy.

All I am saying is that when something looks sketchy, people should not be bullied into not talking about it. Unfortunately, most of the information that would enlighten us is safeguarded by the most suspect people, like the FBI and Sheriff Israel.

Every avenue should be explored. It is right to be critical and distrustful of the government. They are corrupt. They lie. And they will go to great lengths to control you.

All this being said, it is important not to let the government control your mind. They depend on your fear.