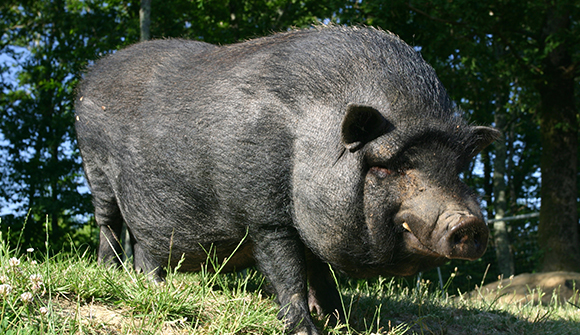 Fed fights back against 'feral hogs' … A top US central banker on Monday warned the "feral hogs" of financial markets against trying to force the Federal Reserve to shelve plans to slow its bond buying, as yields on US Treasuries climbed to their highest level since August 2011. Richard Fisher, president of the Dallas Federal Reserve, said in an interview with the Financial Times that the Fed had anticipated a lively market reaction to last week's announcement that it was considering bringing an end to its $85bn/month bond purchases. But Mr Fisher, a member of the rate-setting Federal Open Market Committee, warned that markets should not think the Fed would end up propping up the economy indefinitely, or that it could be pushed to keep buying Treasuries at the same pace and, in so doing, keep inflating asset price bubbles. – Financial Times

Free-Market Analysis: Richard Fisher comes out of Wall Street but now as a member of the Federal Reserve he has nothing but contempt for the Street, calling those who populate it "feral hogs."

This is part of the ridiculousness of the system, that those who fix the price and volume of money are somehow superior to the traders and salesmen dependent on their inflationary largesse.

It is all part and parcel of the same system, but the media does its best to obfuscate the reality by blaming Wall Street (the beneficiary) while exempting central banking (the controller).

When Ben Bernanke and the rest meet to "analyze" money flows and then force commercial banks to accept their dictates, they are somehow performing a scientific and even noble deed. When Wall Street fattens at the trough of the Federal Reserve, those bankers providing the feed call the industry's fat cats "feral pigs."

Trying to make sense of such a schizoid system is hopeless. But the phony morality of those that fix prices for a living is even more irritating. Here's more from the insufferable Financial Times article:

The former hedge fund manager likened the market reaction to Fed chairman Ben Bernanke's signal that the bank could begin reducing its $85bn monthly bond purchases before the end of this year to the 1992 attack led by investor George Soros on the Bank of England.

The latter led to the UK crashing out of the European exchange rate mechanism. "Markets tend to test things," Mr Fisher told the FT. "We haven't forgotten what happened to the Bank of England [on Black Wednesday]. I don't think anyone can break the Fed . . . But I do believe that big money does organise itself somewhat like feral hogs. If they detect a weakness or a bad scent, they'll go after it."

Signs that Mr Bernanke's comments had rattled investors continued to emerge from financial markets on Monday. The 10-year Treasury yield – the global benchmark for borrowing costs – rose to a peak of 2.66 per cent in early New York trading, extending its rapid rise from a low of 2.10 per cent a week ago. The S&P 500 index of leading US stocks fell 1.6 per cent.

Separately, Narayana Kocherlakota, president of the Minneapolis Fed, said on Monday he was not particularly worried about the short-term market reaction to the Fed move. But he said he would be concerned if it continued. "I think what we've seen so far is not a cause for concern but obviously if these higher yields were to harden over a longer period of time that would be restrictive to economic conditions, suppressing demand and thereby suppressing employment", Mr Kocherlakota said.

Note the reference to the Bank of England and "Black Wednesday." That was the day George Soros shorted the pound, and well he should have, as he saw more clearly than most a chance to profit from a rigid and static system.

If you're going to fix the price and volume of money, be prepared for some to take advantage of it. Presumably, this is what Fisher is worried about and why he made mention of "feral hogs."

You see, Ben Bernanke is far easier to read than the obtuse Alan Greenspan, who stumbled when announcing the possibility of an easy money reduction over time. He was too blunt and markets reacted.

One can speculate that Fisher and others – realizing this – are more concerned about the Fed's reputation than any market manipulation.

After making and winning his big bet, Soros was summoned to the imperial palace by no less a personage than the Queen herself. His crime was not making money but embarrassing the Bank of England.

Apparently, Soros was told in no uncertain terms that he was to undergo a transformation and put his money to use on behalf of the underprivileged. He did so, and thus emerged as the foremost monied leftist of his day, a pattern that has continued to the present.

From Fisher's remarks we can discern something similar: He is warning those who would embarrass the Fed to do so circumspectly. The issue, you see, is not one of generalized and legalized price fixing but of obvious front running.

One is certainly able to make millions if not billions at times like these by guessing correctly. What is unforgiveable is to be too obvious and vocal about it.