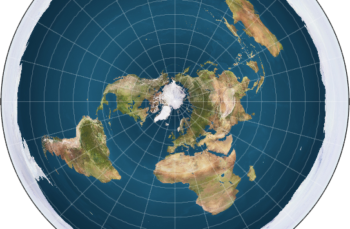 STAFF NEWS & ANALYSIS
Flat Earthers Are The Most Dedicated Trolls Ever
By Joe Jarvis - June 26, 2018

Have you ever been to the ocean? Good, then you know the Flat Earth Theory is wrong. Ships masts appear first on the horizon.

The theory states that the earth is not actually a sphere, but rather disc-shaped with a domed ceiling.

Controlled opposition refers to a group posing as legitimate and spontaneous, but actually created by the government for some purpose, which we will get to later on.

I’m not convinced this is a government operation, but rather some first class dedicated trolls.

And yet, there are all these straight-faced flat-earthers out there who swear that what they say is the truth.

I’m sure at this point they have convinced some people that their theory is true. And I’m sure this only emboldens the original trolls.

But they still prove an important point. Absolutely anything can be made into a conspiracy theory and presented in a way to make you wonder. The fact is we don’t really know anything for sure (is this all a simulation?) and this means it is impossible to disprove most theories if you get “meta” enough.

But take a moment to appreciate the dedication it takes to put out a lie like the flat earth and stick to it without bursting out in laughter every time you present the information:

It has been suggested that airplane windows serve to distort the view of passengers and make them believe they see curvature when indeed there is none. This was likely a ploy by early airline companies to sell more tickets…

Most Flat Earthers think Astronauts have been bribed or coerced into their testimonies. Some believe they have been fooled or are mistaken…

While one can see satellites in the sky at night, it is generally agreed upon that they are not actual satellites but pseudolites or stratolites put there to fool us…

The Flat Earth Society, along with previous notable flatists such as Samuel Shenton and S. Rowbotham, believe there is no end to the Earth and that it continues indefinitely.

Looks like there’s an explanation for everything. As to why, they claim that after the U.S. faked the moon landing, they had to keep the ruse going lest they expose their original lie.

I believe these guys are simply really dedicated trolls who can give us some perspective on what to believe. Conspiracies are on a continuum. Maybe we should spend our time on the ones with serious evidence, and bearing on our lives. Like, was 9/11 a false flag attack, and did the FBI assassinate Martin Luther King Jr.?

Also, maybe we shouldn’t believe things simply because they have fancy math and scientific jargon to back them up–and this goes for mainstream scientific theories as well. People should be able to explain their theories without referring to their credentials to make you stop asking why.

How the Government Uses Conspiracy Theories

Dilute and Overwhelm. When a true “conspiracy theory” starts to be widely believed, the government creates varying degrees of that same conspiracy in order to discredit the true one.

For instance, it is extremely likely that the CIA controls the global drug trade in order to fund their… other activities. But the CIA doesn’t want this to be widely promulgated and believed. They can’t very well respond to the accusations, lest they give them credence. Instead, they invent other conspiracy theories about the CIA to distract.

They might say that the CIA is working with reptilian aliens who truly control the globe. But on the less extreme side, they could distribute a rumor that the several rogue CIA agents have joined top drug cartels.

The truth is that the CIA controls the global drug trade. One of these theories sounds much crazier than the truth. The other sounds much more believable than the truth. So someone looking at the theories side by side might reject all three because of the craziness of the alien theory. Or they might choose to believe the least crazy theory, which is less damaging than the truth.

But they will continue to invent these theories of varying believability until the true one(s) are lost in the noise.

So even if millions of people know the CIA is up to no good, the theories they subscribe to are so varied and distributed that no true theory ever gains attention.

The Haversack Ruse–when the government intentionally leaks fake documents to throw off their enemies–is a similar tactic. Fake apparently damning evidence might be leaked.

But why would the government do that?

Intimidate and Warn. Did the government, or a politician, have Andrew Breitbart, Michael Hastings, and Seth Rich killed? Even if any of these deaths were coincidences, the suspect might want you to think they did it.

It benefits the government for people to think that they are all powerful, all knowing, and infallible. So a certain number of conspiracy theories may be created and disseminated by the government itself.

This would scare some into silence–better not do much investigative reporting if you think the government really murders journalists and whistleblowers. This works whether the conspiracies are true or not. So even if the government did commit these atrocious murders, they still want some inkling of their involvement to leak out into the public.

They want certain people to be scared. Stress makes people easier to control.

Others will come to see the government as too powerful to resist. They will feel helpless, believing it is impossible to live a free life of their own design. They will give in and accept the status quo.

Where Does the Flat Earth Theory Fit In?

I’m certainly not convinced that the government had anything to do with creating the Flat Earth Theory. But it is certainly useful to them none-the-less.

This distracts a whole bunch of people who would otherwise spend their time criticizing the government over real issues. For instance, instead of staying focused on if 9/11 was a false flag attack, some critics of government lose themselves down a rabbit hole of flat-earth theories.

This means that whatever real theories a Flat Earther believes will be discounted by others. You are less likely to believe anything that comes out of the mouth of someone so gullible and ill-informed.

Other skeptics can also use the Flat Earth theory in the same way that the phrase “tinfoil hat” is used. So if you tell someone 9/11 was a false flag, they could say, “I bet you believe the Earth is flat too.”

This is a form of dilute and overwhelm. Anything that sounds slightly unbelievable is immediately associated with something obviously absurd. A true theory will be placed on the same spectrum as the flat earth theory, and thus discredited.

So what do you think, are Flat Earthers dedicated trolls, government plants, or just dumb?