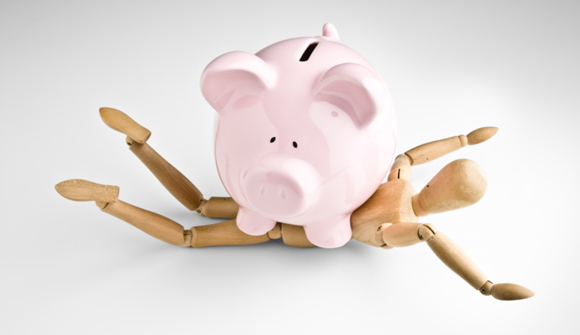 Should the U.S. force citizens to save? Americans aren't saving enough to retire. This gap poses a problem for everyone, not just people who will face near-poverty when they can't work anymore. Does that merit forcing people to save more? Retirement in America is supposed to be financed by three sources: Social Security, employer pensions, and additional saving … Another, potentially more palatable, alternative to forced saving is nudging. That is what Britain has adopted. The British government requires firms to automatically enroll their employees in a pension account and put 8 percent of their salary into it. – Reuters

Dominant Social Theme: Let's nudge citizens into saving. The government needs to do it.

Free-Market Analysis: Step by step, government organizes savings for private citizens. Each step may seem logical at the time but the cumulative effect is to strip individuals of any ability to survive outside of the womb of the nanny state.

This Reuters article is proposing that "firms automatically enroll employees in a pension account and put 8 percent of their salary into it." This is not so different than current models that incentivize employees to save by matching donations to pension plans.

But it is different, nonetheless, as the level of coercion has been elevated. Now, part of the plan does allow employees to opt out but the clear message being sent is that Western governments should mandate the stance private corporations should take with their employees.

Social Security in America makes up the foundation and serves two roles: it's a forced saving plan by making everyone contribute 12.4 percent (the employer and employee contribution) of their income (up to the first $113,700 they earn) in exchange for the promise of income in retirement.

It's also social insurance because the lower your income, the larger your benefit will be relative to what you paid in. But for most people, it is not intended to finance all of retirement. The problem is the other two sources are falling short. Employer pensions, for those who had them in the private sector, have been replaced by private accounts like a 401(k) plan.

With these accounts, the individual is left to save enough and bear investment risk. Alas, most people don't contribute enough. That's apparent with baby boomers, the first generation to have these accounts for decades, who are nearing retirement with meager savings.

According to the Survey of Consumer Finances collected by the Federal Reserve Board, the median value of financial assets (non-housing saving) of working Americans between age 55 to 65 was just $67,000 in 2010. That means many people will retire almost entirely dependent on Social Security and take a big cut in their living standard.

… If people run out of money, the burden falls on the state. Does that justify forcing people to save more? … Countries like Australia and Chile already force their citizens to contribute to retirement accounts. … We know from their experience that forced saving changes the government's role in our lives and, potentially, its relationship with financial markets.

For instance, the government would have to decide how much people should save and how they should invest. It's been estimated that Americans should be saving at least 10 percent to 15 percent of their income. But that may not be realistic for many families living paycheck to paycheck.

… The government would make all the investment decisions and bear the investment risk. This has the advantage of being simple and predictable for American savers. But it also turns the federal government into a large asset manager and player in financial markets.

It would explicitly own securities other than government treasuries. That has the potential to create an uncountable number of conflicts and unintended consequences.

Surprised? We're not. The additional, predictable element of so-called forced savings is that government might eventually administer investments for citizens, thus immediately making government the largest player in the markets, including the stock market.

This is most certainly a bad idea, as once government is involved directly with investing it won't be long before negative events that deprive people of savings begin to be looked at from a potentially criminalized standpoint. The outcome of such programs would surely be that a downward trend might constitute a criminal act.

But that is not the most pernicious part of the current debate. The worst part is that it's so damn reasonable. People are struggling. They're not making enough and saving enough and thus the idea that government ought to help strikes one as a necessary step forward. But it's not.

In the modern era, this is how tyranny arrives. It is advanced step by logical step. And most people simply don't have the time or discipline to identify the logical fallacies that accompany it.

The main drivers of people's difficulties in maintaining and expanding prosperity are the income tax and central bank money printing. One confiscates wealth outright and the other does it surreptitiously via price inflation.

The result of these twin pressures on modern citizens is not merely a mathematical subtraction. The entire fabric of society has been changed by these two elements. Economies rise and fall as central banks print too much money, enabling people to feel rich before reducing their savings and investments to rubble. The result is impoverishment.

Add in a third factor, which is the enforced expansion of the corporate sector via judicial fiat, which constantly enforces the fiction that a corporation is a person, and you end up with a triumvirate of social and economic manipulations that create a great deal of trouble.

The result of corporate judicial fiat is that the modern corporation has swelled to truly titanic proportions and has taken its place beside government as a kind of partner for Leviathan.

What is being established within this context is a privileged class that works within these mighty corporations and gains the benefits of certain laws and those who work outside of the corporate walls and are disadvantaged. Couple this with the general impoverishment caused by taxes and inflation and you have a poisonous brew that can seemingly only be rectified by yet more regulatory antidotes.

In truth, laws will never generate prosperity and government will never be able to mandate wealth. It may occasionally seem that way because Social Security-type programs seem relatively successful, but that will end over time as well, as demographic trends outstrip benefits.

What is left is the fiction that government can work hand-in-hand with the "private sector" to ensure that people have comfortable retirements. But all we need to do is look around at the current investment environment to know this is simply a chimera.

Those proposing such programs don't have in mind your welfare. They simply – unfortunately, determinedly – want to expand the power of government via corporatism. That's what globalists proposing these programs always want to do.

We've written a lot about the upcoming Wall Street Party and how you may wish to take advantage of it. But to do so, you have to be cognizant of the real pressures manipulating the economy and investment markets. You have to understand how the system really works, in other words.

Those who will accept the "reasonableness" of proposals such as the ones floated in this Reuters article are certainly not aware of the larger manipulations they are being subjected to. They will find these arguments reasonable and even persuasive and then they will be confused and downcast when they discover later, much later, that nothing has worked out as projected.

Or rather, one thing has worked well. Government has assumed even more power over the individual, who is yet more impoverished as a result.