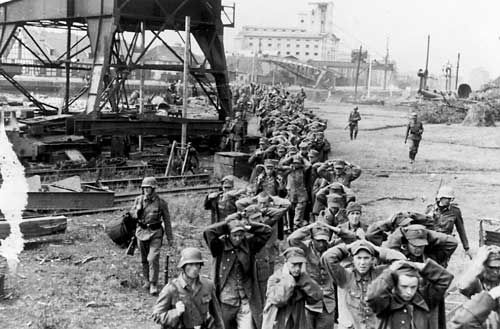 The Polish Senate just passed a bill to make it illegal to claim that Poles were complicit in implementing death camps during WWII in Nazi-occupied Poland.

Because nothing proves you’re not a Nazi like being a free-speech Nazi.

The bill is expected to be signed by the President of Poland who previously voiced support. The law would make it illegal to refer to the Nazi death camps in Poland, such as Auschwitz, as “Polish Death Camps.”

The government insists these were Nazi death camps. To refer to them as “Polish” said the former Prime Minister in 2012, “it is as if there were no Nazis, no German responsibility, as if there was no Hitler. That is why our Polish sensitivity in these situations is so much more than just simply a feeling of national pride.”

The law would also make it illegal to even suggest that the Poles helped the Nazis willingly. It is to be taken as a fact that the country as a whole did everything in its power to stop the Nazis. For suggesting otherwise, Poles could get 3 years in prison or a fine.

Yes, three years behind bars for daring to discuss history contrary to the academic “consensus.”

But anytime you hear the word consensus in academia or the sciences, you should be suspicious. In fact, there is still plenty of debate about the extent to which Poles cooperated with the Nazis.

It is true that the Polish government in exile during the Nazi occupation told Poles they would be severely punished for collaborating with the Germans. But the engineered poverty created economic incentives to collaborate–and harsh penalties for assisting enemies of the Reich.

But beyond coercion, there is evidence that some Poles gladly assisted the German efforts to arrest Polish Jews.

Hersch Altman was 9 years old living in the Polish countryside when the Nazis invaded. In his book On the Feilds of Loneliness, Altman recounts the moment he and his sister were captured by the Nazis.

They were hiding on the side of the road in the Polish countryside, as the Nazis searched for any escaping Jews.

A middle-aged Polish woman, one of their neighbors, saw them. She yelled to the Nazi officers and pointed out Hersch and his sister. According to Altman’s recounting, the Polish woman laughed as he and his sister were arrested. She was delighted to see the Nazis root out the Jews in her neighborhood.

Hersch ultimately escaped and lived throughout the Polish countryside for years. But he never saw his sister again after that day.

Would this retelling of a first-hand account run afoul of the new Polish law?

Of course, you could challenge the accuracy of the anecdote. You could present other evidence contrary to this incident. Maybe you could even show it was an isolated incident.

But it is absurd to make such a discussion illegal.

It is an understandably sensitive topic. The Poles were seen as subhuman by the Germans. No collaborative Polish administration was allowed to rule Poland under the Nazis like many other occupied countries. There was a fierce resistance, and many Poles lost their lives at the hands of the Germans.

Since the country was administered by Germans, it is true that the death camps in Poland were not “Polish” death camps by any other standard than where they were located. While this might seem like a trivial distinction to foreigners, the Poles want to make it clear that they were not the oppressors, it was the Nazis.

But that doesn’t change the absurdity of the new law against free speech.

Itself authoritarian, the law actually undermines the oppression the Polish resistance fought against when the Nazis occupied their country.