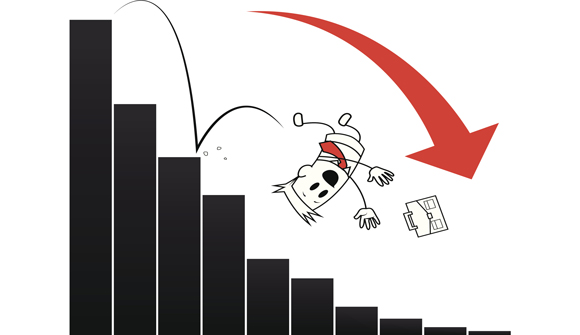 STAFF NEWS & ANALYSIS
FT Explains the Decline and Fall of the West … Thanks!
By Staff News & Analysis - December 10, 2013

The west is losing faith in its own future … Living standards are even under pressure in countries that have done relatively well … American and European politicians like to talk about values and institutions. But for billions of people around the world, the crucial point is simpler and easier to grasp. The west is the part of the world where even ordinary people live comfortably. That is the dream that makes illegal immigrants risk their lives, trying to get into Europe or the US. Yet, even though the lure of the west remains intense, the western world itself is losing faith in its future. Last week Barack Obama gave one of the bleakest speeches of his presidency. In unsparing terms, the US president chronicled the increasing inequality and declining social mobility that, he says, "pose a fundamental threat to the American dream, our way of life and what we stand for around the world". – The Financial Times

Dominant Social Theme: The West is failing … and it is a terrible thing.

Free-Market Analysis: The Financial Times does us the favor of advancing what we call directed history in this article.

It is certainly an amazing article, explaining how the West is collapsing and what it portends. You can see at the end of this excerpt that a specific threat is left dangling.

The only thing the article doesn't discuss is WHY. And there is a reason for that.

According to researchers at the Brookings Institution, the wages of working-age men in the US – adjusted for inflation – have fallen by 19 per cent since 1970. Joe Average – once the epitome of the American dream – has fallen back, even as gains for the top 5 per cent of incomes have soared. Even conservative politicians are worried.

Senator Marco Rubio, a contender for the Republican presidential nomination in 2016, points out that his parents were able to "make it into the middle class" from relatively humble jobs, as a bartender and a maid. These days, he acknowledges, that would no longer be possible.

The sense of gloom and insecurity in Europe is also grounded in reality – in particular the knowledge that welfare and retirement benefits are likely to be less generous in future. The pressure on prosperity is most intense in countries that have suffered worst in the debt-crisis – places such as Greece and Portugal have seen actual cuts in wages and pensions. But living standards are even under pressure in European countries that have done relatively well.

… There is a connection between the rising optimism in the developing world and the rising pessimism in the west. In his speech last week, Mr Obama remarked that "starting in the late 1970s, the social contract began to unravel". Perhaps not coincidentally, it was also in the late 1970s that China began to open up. Even defenders of globalisation now usually acknowledge that the emergence of a global labour force has helped hold down wages in the west.

… If the erosion of living standards continues, how will western voters react? There are already signs of political radicalisation – with the populist right on the rise in both the US and Europe. But, as yet, there is no real sign that the Tea Party in America or nationalist movements in Europe have a realistic shot at controlling the central government in a large nation.

The consensus around globalisation also seems to be holding. Indeed this weekend the World Trade Organisation apparently made a breakthrough in the search for a new global trade deal. But while new political movements are not yet ready to smash the established parties in the west, mainstream politicians are having to react to the new economic climate.

Another decade of western economic malaise – or, God forbid, another financial crisis – is likely to see more radical solutions and politicians emerging.

Yesterday, we paraphrased a Reuters article, trying to show how dishonest reporting could be reconfigured to tell the truth. This article in the Financial Times is as bad as anything ever posted at Reuters.

It is so bad because it is an ambitious and important article. The more important the news, the more important it is to tell the truth – or risk alienating your readers. Using that standard, this one article should have put off most of them, perhaps permanently.

According to researchers, the West is in decline and its citizens know it and are worried about it. Radicalism is on the rise and new, rightist parties are springing up.

Here – manning the watchtowers for the mainstream media – our job is to write articles that present the problem without ever explaining how it occurred. We're supposed to scare and depress you. That's our real job, though we are not supposed to admit it.

But in this case we will be blunt: The West is dying because the banking elites that run Western economies want the West to die.

Move past the "how" of the West's decline to the "why" and it is increasingly clear that the West's difficulties are being "managed."

Isn't that clearer? That's what the Financial Times should say, but you can't expect any honesty from the top distributors of elite memes.

We pointed out earlier that the FT article contains a threat. Here it is: "Another decade of western economic malaise – or, God forbid, another financial crisis – is likely to see more radical solutions and politicians emerging."

That's how the article ends, and in our estimation the article was written to provide this conclusion. The whole idea of destabilizing the West is quite possibly to create enough chaos to offer globalist solutions.

Part of the destabilization will be the implementation of false-flag political organizations and "fascist" sociopolitical solutions that will be used to justify aggressive internationalism.

This is the same playbook that was used – on a trial basis – in the 1930s and 1940s. The elites, of course, always try everything at least twice. Pre-War Europe was a kind of dress rehearsal for what is taking place today.

Then as now the mainstream press spoke of the "decline of the West." The difference is that now we can see – thanks to the Internet – that the so-called decline is being managed, just as it was 80 years ago.

This is what the elites have in mind. This is their "directed history." Ruin the West, build up the developing world and then create a merger that brings internationalism to fruition.

Thanks, FT, for providing a road map in this important and disingenuous article.