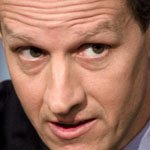 World leaders on Thursday heralded the G20 summit as the day the world "fought back against the recession" as they put on a show of unity that lifted global markets and mapped out a new future for financial regulation. Gordon Brown, UK prime minister, host of the summit, said the meeting marked the emergence of a "new world order", as he unveiled what leaders claimed was a $1,100bn package of measures to tackle the global downturn, including support for lower income countries and a $250bn plan to boost the international money supply. Close inspection showed that some of the $1,100bn pledged included re-announcements and half-done deals. However, even before the summit ended, equity markets rose sharply around the world amid hopes that the global economy was stabilizing. In London, the FTSE 100 rose 4.3 per cent to pass 4,000 points for the first time in six weeks, while in New York, the S&P 500 closed 2.9 per cent higher. Early Asian trade on Friday showed investors extending the strong gains made on Thursday. The benchmark Nikkei was up 0.6 per cent after hitting a three-month intraday high. The leaders papered over divisions between the US and Europe about whether the world could afford a new fiscal stimulus. – Financial Times

Free-Market Analysis: Well, maybe … As we suggested yesterday, the recent meeting between China and America presaged a conclusion to the G20 conference that would produce sturm and drang but less of substance than would be trumpeted. And that seems to be the case. Here is some more from the FT article:

The summit ended with smiles as a dispute between China and France over the blacklisting of tax havens – including possibly Hong Kong and Macao – continued behind the scenes. US officials say that Mr. Obama helped broker a compromise between Hu Jintao of China and Mr. Sarkozy, who had threatened to walk away from the summit. Mr. Sarkozy had objected to the absence of agreement to publish a list of offshore tax centres that were not in compliance with existing standards on transparency. In the end they agreed the G20 would only "take note" of the Organization for Economic Co-operation and Development list, rather than endorse it. Mr. Brown claimed that China had agreed to a $40bn contribution to IMF funds. Chinese authorities could not confirm that last night. The IMF declined to comment. The summit text included commitments to curb "risky" bank pay and bonuses, but offered little new on monetary policy action or efforts to clean up bank balance sheets.

So let's summarize as best we can. The more radical agenda for the G20 meeting included trillions in additional stimuli plus an international regulator, full transparency regarding the financial and market activities of private and public corporations including perhaps daily trading data, a new global currency and a list of tax havens that would likely spell out penalties as well. Obviously, the meeting did not meet these Draconian goals.

What did occur? Less than meets the eye. There is some more money to "stimulate" the economy worldwide (how much seems to be debatable). No international regulator has emerged, though there had been talk of giving the IMF such powers. The IMF did receive a cash injection (to come) and a rather vaguely worded compact emerged that would list tax havens, presumably subjecting them to some sort of international sanctions.

Yes, the real meeting was between China and America. And China, holding so many dollars, was never going to go along with a new currency that would devalue the dollar radically, certainly not now. Hong Kong, remember, may well be listed as a tax haven, so once again China was not apt to be incredibly enthusiastic about Nicolas Sarkozy's bank transparency bug. Finally, while China – and America, too – were probably not dead-set against increased international regulation, the idea of giving up local sovereignty to an international financial regulator was not going to go anywhere fast. In fact, an international regulator is really a French regulator, given France's strategic agility when it comes to UN diplomacy and its EU clout.

From a free-market standpoint the worst has seemingly been averted. No international regulator, no grand, immediate attack on banking freedom, no huge amount of money poured down the various rat-holes of failed global capitalism. Of course, incrementally, the latest G20 does bring the Western world closer to a kind of global regime, but internationalism is a slow affair. Of course, those who attended the G20 for various reasons will hail it as a success and claim great victories. In fact, these victories are defeats for free-market thinking individuals and fortunately the victories do not go very far. We will have to ingest more communiqués and analyses to fully understand what went on. The bad news: There are more such G20 meetings to come and plenty of time to do further damage.