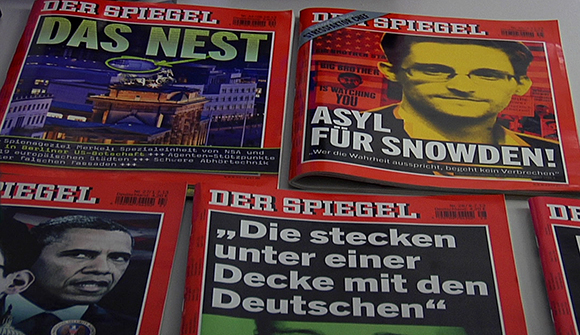 Lying Press? Germans Lose Faith in the Fourth Estate “Mendacious swine journals” reads this sign held by a German protester at a recent PEGIDA demonstration in Dresden, listing various German media outlets … Germans are losing faith in their media. Nowhere is this more apparent than in mistrust of refugee crisis media coverage. Where did journalists go wrong? And how much of this skepticism reflects a preference for rumors over facts? – Der Spiegel

One of Germany’s most prestigious mainstream magazines, Der Spiegel has just devoted an extensive article to the emerging perception among the German public of a “lying press.”

The article addresses the anger felt by Germans over their “lying” media, an anger that has been growing because of the recent surge in Muslim immigration in the country.

The suspicion is that the German media is not reporting on the true extent of Muslim misbehavior, including various kinds of crime and attacks on women.

By featuring an extreme nomenclature, Der Spiegel has purposefully polarized the debate. Its editors have done so to contrast the seemingly simplistic accusations of the German public with the oh-so-complex realities of modern mainstream journalism.

People should be aware of what Der Spiegel is doing because inevitably these tactics will be used to create additional credibility for the struggling mainstream media in countries outside of Germany.

Here is an example of how the article introduces shades of gray into what should be clear-cut media malfeasance. First the blunt media indictment:

The book “Gekaufte Journalisten” (Bought Journalists), by Udo Ulfkotte, a former editor with the conservative Frankfurter Allgemeine Zeitung (FAZ) … contains claims such as: Freedom of the press is just an illusion, and top journalists are merely an extension of the NATO press office.

Then the arduous application of factoids intended to undermine the book’s claims:

Ulfkotte’s book was published by Kopp, a melting pot for conspiracy theorists. Kopp publishes works by ufologists, and by authors who claim the Americans destroyed the Twin Towers of the World TRADE CENTER themselves in 2001. Ulfkotte’s book was on the bestseller lists for months.

“Bought Journalists” is the bible of all those who have renounced their faith in the German media. Ulfkotte’s critics see the book as a vendetta against the FAZ, which he left on bad terms.

You can see The Daily Bell’s coverage of UlfKotte’s book here:

Directed History? Hey, We Told You So

Ulfkotte relates how he was approached by German and even US intelligence officers (CIA, etc.) and basically instructed to write stories a certain way. Sometimes, the stories were simply provided to him.

You can see how Der Spiegel attempts to counteract these claims by pointing out that his publisher also publishes UFO books and 9/11 conspiracy books. The article even suggests that Ulfkotte’s reminiscences were part of a larger “vendetta.”

In fact, all of these statements are logical fallacies that have little or nothing to do with Ulfkotte’s accusations. But that’s how this article works.

It takes aim at the broadest possible target – the “lying press” – and then expends thousands of words on an article that is determinedly – exaggeratedly – moderate and reasonable.

The article is cleverly slanted to appeal to those who fancy themselves as more sophisticated than the general public.

Cleverly, the article ends by criticizing the press itself. In order to combat accusations of lying, we are advised that journalists need rigorous “research, fact-checking and caution.”

Additionally, modern journalists may be somewhat divorced from the larger society they are supposed to cover. We learn this is because of the “academization” of the profession.

In other words, reporters are too scholarly!

Smart reporters dedicated to fact-checking are the antidote to “lying press” accusations. That’s what we learn from Der Spiegel.

It’s asinine. When a CIA officer approaches you with an article to plant under your name in a major German newspaper, all the fact checking in the world is not going to make a difference.

And whether you are scholarly or not won’t change the reality of what you are being asked to do.

The Der Spiegel article attacks the lowest common denominator of criticism – the “lying press” – and then makes the case that sophisticated readers should understand that the reality is a good deal more complicated.

In fact, it is as simple and brutal as the barrel of a gun.

If you are a correspondent in Germany for a mainstream publication and you are approached by the American or British government or your own government, you better do as you are told or you will likely lose your job, your career and perhaps even your life.

Conclusion: The Internet has shown us clearly what’s going on in the world today. Articles like the one in Der Spiegel attempt to make the reality a great deal more complex than it is. But we need not be misled by such arguments. They occur at all levels of the mainstream media these days and in parts of the alternative media as well. They are obfuscations of reality. If we are to survive and thrive in the 21st century, we need to keep a firm grasp on reality as unpleasant as it might sometimes be.