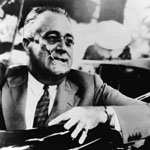 Gold futures rose for a fourth consecutive session Monday, surging to close at their highest level in nearly six weeks, amid safe-haven buying, broad stock and commodity rallies, and a continuing fall for the dollar Gold for December delivery rose $27.70, or 3.5%, to end at $819.50 an ounce on the Comex division of the New York Mercantile Exchange, the highest closing level since Oct. 15. It rose as high as $830.10 earlier in the session. The metal has gained $86.80, or 12%, since Nov. 18. On Friday, it rallied more than $40, capping off a rise of 6.6% for the week — the biggest percentage gain since the week ended Sept. 19. Gold's gains came as U.S. equity markets jumped and as crude oil and other metals surged. Silver leaped past $10 an ounce for the first time in two weeks. – Market Watch

Dominant Social Theme: It's bad out there, but markets continue to roll along.

Free-Market Analysis: Stocks were up, the dollar has been strong (relatively speaking) and gold has been making a push. What's going on? Money metals provide a haven when economies become distorted, and the current economic situation is fairly maladjusted from decades of monetary stimulation.

The situation is bad because resources have gone to the wrong places. In the early 2000s, resources went into software that was later proven to be illusory from the standpoint of utility. In the later 2000s, money went into very large houses and other speculative ventures in the real estate arena, and these investments did not prove.

Why did so much money go into the wrong kind of investments? It was due to there being too much money to begin with, thanks to central bank overprinting and issuing of too much credit. Because so much money went into the wrong places, the resources that should have been created by money and human action were starved of capital. And because these necessary resources were starved of capital, it will take some time before additional capital reinvigorates them.

Gold is not necessarily going up on immediate inflation fears, nor is it going up, necessarily, because the stock market went down (recently, it didn't.) Gold is going up because there has been a massive readjustment in the way the world saves and spends. The distortions in the economy are being wrung out. But it may take several years for this to take place, and the amount of time could be further extended if governments take action to actively reflate economies. The more distortions that governments re-introduce into the broad economy through reflation, jobs programs, etc. the longer it will take for a real recovery to occur. Within this context, and until monetary distortions are wrung out, that is what the price of gold is telling us. And that is why gold will likely continue to rise.