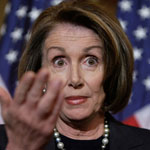 The nation's governors got to work on Tuesday, taking their case to the president-elect for a $136 billion infrastructure spending program that they hope will funnel immediate government money toward bridges, roads and rail lines in the hopes of creating jobs and spurring the economy out of recession. It's not a handout or a bailout, insisted the host of the economic forum, Democratic Gov. Ed Rendell of Pennsylvania, the chairman of the National Governors Association. Rather, it's the "best remedy for getting America back to work," Rendell said. "We think that we can create literally millions of new jobs and at the same time lots of orders for concrete and steel companies and asphalt companies and lumber companies and the like," Rendell said. "None of the bailouts have created one new job. Infrastructure can create, the economists say, 40,000 jobs for every $1 billion of infrastructure spending. Well, that's a huge lift." – AP

Dominant Social Theme: The government can provide plenty of work.

Free-Market Analysis: It sounds reasonable; but let us examine this premise in a little more detail.

First of all, how much of American in frastructure is "necessary – how much was built in response to market forces and how much was built in a way that markets would have organized. America's infrastructure, like Europe's infrastructure, is a mix of public and private, with public predominating in the 19th and 20th centuries. This means that a good deal of American infrastructure was created for political reasons and either would not have been otherwise built, or would have been built differently and likely more efficiently.

Second, how much of the infrastructure is necessary to begin with. America's public schools are a good example. America's famous log-cabin schoolhouses have given way to gigantic, factory-sized buildings with computer labs, swimming pools and day care centers. While such high-maintenance plants may be good from the standpoint of justifying the salaries and complex bureaucracy of those who oversee them, it does not follow that they are necessary or appropriate to the task at hand.

Finally, it is the political process that will decide what infrastructure gets renewed, for how much and what parts have the highest priority. There are certainly regions that need help and reconstruction more than other areas, and these regions may be critical to a local economy's productivity, but it does not follow that these regions will receive the priority in funding or even via a timeline. A good example might be New York City which is notorious for giving Manhattan precedence when it comes to infrastructure spending at the expense of outer boroughs, Brooklyn, the Bronx, Queens and Staten Island.

For all the above reasons, an approach to American rebuilding that sounds reasonable – putting Americans "back to work" building infrastructure is shot through with questionable assumptions and difficulty as regards priorities, disbursements and the necessity and appropriateness of specific repairs. The political economy, as we pointed out yesterday, is not the real economy and does not function in a way that resembles such. Governments' getting hold of infrastructure funding, whether in America or in Europe – which will doubtless mimic American programs – will spend for political purposes, and these may be antithetical to what the market demands.

The idea of infrastructure spending is seemingly a win-win for regions with crumbling infrastructure and areas that have high unemployment and budgets that are out of balance. Funds flowing in will be used by these regions to balance budgets and put people back to work. Much will be made of the relevance of the work that is done and its necessity. But if it is left up to the political process to pick and choose what is to be supported and rebuilt, then the chances are that much of what is rebuilt will be poured into projects that are ultimately wasteful, unsupportable or inefficient. Schools are a good example.

It would seem that rebuilding infrastructure is a win-win for everybody. But when examined more closely, much of the rebuilding will be seen as "make work" programs that will only reinforce and upgrade the wasteful building of the past. As much infrastructure has been built during boom times, such infrastructure can be seen as being part of a larger misappropriation of capital, funds that have been directed toward projects that are ultimately unsustainable, inefficient and unnecessary.

Such rebuilding actually constitutes gold-plated patronage projects, efforts that seem to make sense on the surface but that will only retard real growth while encouraging further mal-investment. That is why public works projects are possibly the largest boondoggles of all, certain to set back real economic recovery while providing ways of injecting further, massive inflation in a local economy. Those who have the misfortune to live near such projects will experience fairly aggressive price increases for goods and services, another reason why in such times the accumulation of honesty money, gold and silver, in all its forms becomes a precautionary activity of increasing urgency, the more such programs are discussed and implemented.