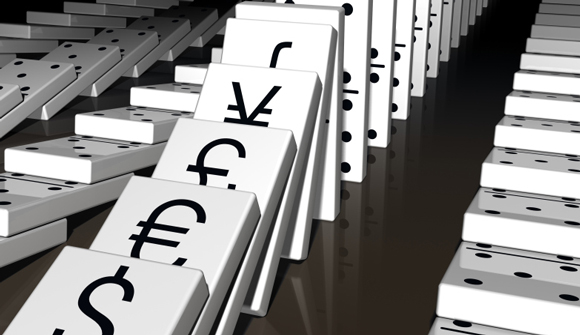 Swiss inch towards renminbi hub … News that Switzerland's central bank recently opened talks with its Chinese counterpart to swap currencies has raised Swiss hopes of attaining a renminbi hub status. But Switzerland is playing catch-up with rivals that share the same ambition. – SwissInfo

Dominant Social Theme: The Swiss really need the validation of the renminbi …

Free-Market Analysis: We are supposed to forget that the Swiss had one of the great currencies in the world. Instead, we can see from this article that the Swiss seek the validation of the Chinese renminbi.

Once, the Swiss franc was linked to gold but the Swiss destroyed that link well over a decade ago. Then the Swiss placed a ceiling on the franc to ensure that it wouldn't go much past the failing euro.

And now the Swiss want to become a renminbi hub.

As global renminbi (RMB) transactions gather pace, a tantalising vision has emerged of a new international reserve currency competing with the dollar, euro and British pound. Financial centres are jostling to enjoy the prestige and profits of becoming RMB conduits. In December 2012, the Swiss government officially announced its intention of becoming a renminbi hub, joining the likes of Britain, Canada, Germany and France in trying to woo Beijing.

The signing of a free trade agreement (FTA) with China earlier this year might give Switzerland a boost, according to Felix Sutter, head of PricewaterhouseCoopers' Asia business group in Switzerland. But knowing how to win a renminbi hub mandate from Beijing is hard to predict.

"China has always preferred bilateral negotiations, that are not always completely transparent, to pick RMB partners," Sutter told swissinfo.ch. "Each country, at a specific time and under specific circumstances, has its own appeal."

In addition to making sure the FTA runs smoothly, Switzerland might make itself more appealing by granting more visas for Chinese investors, Sutter suggested. Growth of RMB trading The Society for Worldwide Interbank Financial Telecommunication (SWIFT), which processes global transactions, measures the popularity of currencies.

The Chinese renminbi shot up from being the 20th most popular currency for global payments in January 2012 to 12th in October 2013. It occupies 8th position in the list of foreign currency exchange transactions (11th in January 2012).

The RMB is also the second most frequently used currency for trade finance transactions, commonly used by commodities traders – a booming business in Switzerland. The Swiss Bankers Association believes that by 2020 the RMB could be a top three reserve currency.

There are fears that Switzerland might be left behind by rival countries, particularly Britain, which has leveraged its historical connection with Hong Kong to set up a currency swap arrangement and encouraged a number of Chinese banks to set up shop on British soil.

But the attack of the US judiciary has cracked open Swiss privacy and devastated the private banking industry. And the fumble-fingered approach to the Swiss franc has devalued the currency to the point where Swiss traders look longingly at another country's currency.

"The RMB is not a difficult currency to embrace from a financial point of view, but it might take some time for Switzerland to catch up operationally," Julius Baer's head of growth market investment consulting, Kerry Goh, told swissinfo.ch. That has not stopped Switzerland's financial centre from creating and trading RMB-denominated financial products, such as derivatives, bonds and funds.

Private banks have already opened thousands of accounts holding up to RMB20 billion in Switzerland, according to the Swiss Bankers Association (SBA). Billions more are held by the Swiss funds industry or are traded via a range of financial products from Switzerland.

Western governments increasingly chase the renminbi dream … according to Kerry Goh. "If Switzerland were to become an RMB hub, it would serve to add some legitimacy to the currency here and boost uptake of RMB products," he told swissinfo.ch.

We're not sure if Goh is talking about Swiss franc legitimacy or renminbi legitimacy. But either way, it's sad. In fact, we have a name for this: directed history. Having destroyed the Swiss franc as a world leader, Swiss traders now scramble for a Chinese substitute.

This only further confirms our perception that the proverbial fix is in: Chinese, Indian, US and European currencies among some others are being considered for a global currency basket that will replace the petrodollar. The Swiss franc, hammered and battered, will be left out of the fun.

We often hear that China is an emergent "enemy" of the United States. We've never believed this. At the very top, the bankers are united. They work together.

Let the military men and the frightened middle classes believe that nations are set against nations in the 21st century. It's simply not so.