STAFF NEWS & ANALYSIS
Headlines Like These are Why Trump Isn’t Worried…
By Joe Jarvis - December 27, 2017 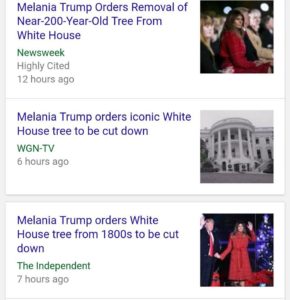 The weird thing about trees is that someday, like all of us, they die.

This tree was on its way out. In fact, the tree was removed in order to protect anyone standing under it from danger. Who usually stands under it? The press. Melania was trying to protect the same press that now attempts to skewer her over landscaping.

(Of course, if the tree broke and killed a member of the press, then they could all have a field day reporting that Trump is responsible for killing a journalist.)

The tree will actually be removed on the advice of the National Arboretum. It is only held in place by an intricate maze of cables. And Melania actually made sure they saved cutting from the tree to replant.

I felt very silly writing the past few paragraphs because the issue is so trivial. This is not important news. The media that originally reported this story (starting with CNN) should be laughed out of town. And in one way or another, they will be.

It’s not so much the reporting of this non-news that is a problem. I suppose it may be of some interest to someone somewhere. Perhaps a side link, or maybe a half page in Arborist Monthly. But the headlines! That is what really does it.

You know, the tree was actually planted by Andrew Jackson. So the media could have said, “Melania Orders Removal of Symbol of Racism,” or “Two-Hundred Year Old Monument to the Trail of Tears to Be Cut Down.”

The substance of the article missed an opportunity too. The White House had to call in tree experts, who made a report which was delivered to Melania, who sat down with the arborists and staff to thoroughly explore every option before making the call to remove the tree.

If that’s not a metaphor for the government, I don’t know what is! A dying tree, being held up by cables to preserve some remnant of a long-gone past. The desperate bid to save a symbol, to hold onto something rotting and dangerous. And then the intricate process, bureaucracy, time, and money that it takes to just cut down the freakin tree!

The media is absolutely desperate to criticize the Trump administration over anything they can get their hands on. Except that this is exactly the type of coverage Trump relishes in. Big nothing-burgers which keep his name in the news, but don’t hurt him in the least. Only anti-Trump zealots will latch on to a story like this. The rest of us, not even just the Trump supporters, will roll our eyes and stop paying attention.

And that is the dangerous part of these types of stories. What are they masking?

Did you hear about Trump’s terrible picks for the Federal Reserve Board?

Or about how Trump’s Justice Department settled the old IRS Tea Party targetting lawsuits for peanuts?

While this story played out, and Trump was “caught” golfing by CNN, here’s some other stuff that happened:

Did the FBI Conspire to Stop Trump?

Ironically the FBI investigation into the Trump Russian collusion charges has done a 360 and now points to the Democrats and FBI agents as the real criminal manipulators. But they are in too deep and have overplayed their hand.

But how bad has this government gotten that this sort of corruption at the FBI is considered boring? The FBI has long been a political tool of suppression.

China is a big red flag to the rest of the world on how not to govern. They intimate journalists and dissidents and monitor every aspect of their citizens’ lives. A “social credit” system has even started to score citizens based on things like patriotism and neighborliness.

But Melania approved a tree getting cut down, and that is just too fun an opportunity for the media to ignore! It fits the scorched-earth-Republican narrative too well.

She also ordered all the tree’s progeny uprooted and burned. As for the tree itself, she plans to fashion a throne, from which she will rule for a thousand years.