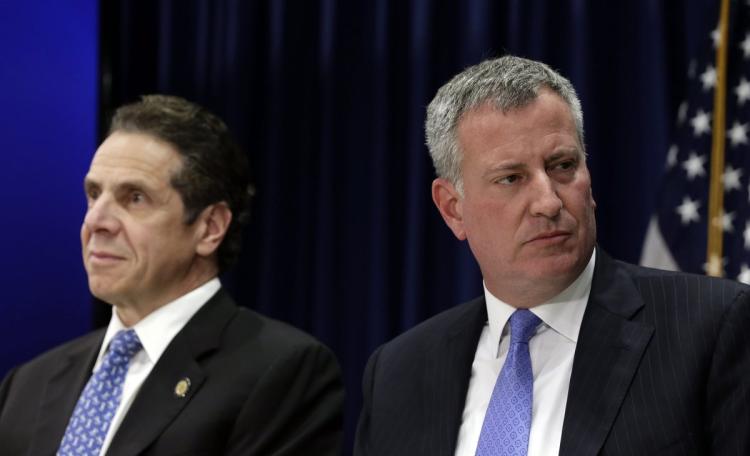 STAFF NEWS & ANALYSIS
Here’s why the wealthiest city in America is screwed
By Simon Black - February 14, 2019

It was the most expensive home ever sold in the US (but only one piece of Griffin’s massive, luxury real estate portfolio).

Good for Ken… he’s incredibly wealthy and can spend his money however he wants. But most of society hates this kind of behavior.

Even if a guy has earned $10 billion through hard work and ingenuity, they don’t believe he can spend it freely… and those feelings have only been growing recently with the widening wealth gap and the rising, leftist presidential contenders.

And New York City is gunning for Griffin…

He’ll no doubt pay millions of dollars a year in real estate taxes and employ a team of people just to manage that property… and his investment firm, Citadel, has an office in NYC employing hundreds of people.

Griffin’s purchase was the perfect backdrop for the government to bring up the “pied-a-terre tax”… the proposed tax would be up to 4% per year for people who own properties above $5 million in NYC but don’t permanently reside there.

So Griffin would be out an extra $9 million a year (on top of the 1% mansion tax New Yorkers already pay on home purchases above $1 million – mind you, $1 million in New York gets you a few hundred square feet)… and normal real estate taxes.

It’s an all-out war on the rich in New York… because the city (and state) are broke.

The city is expecting a $1 billion shortfall this year.

Never mind they just initiated a $2.50 “congestion tax” on taxis, so it costs over $6 just to get in a taxi… and some politician running for local office wants to double the just-increased minimum wage to $30/hour… the answer from the government’s perspective is always MORE.

If things get bad enough, guys like Griffin will leave.

New York Governor Andrew Cuomo (who faces a $2.3 billion shortfall in his state budget) recently alluded to this in a press conference…

But the rich are already flocking in droves… since 2007, New York and California lost 2.2 million residents to lower-tax states. And the pace is accelerating (one economic group expects them to lose another 800,000 residents in the next three years).

Hey, at least NYC is still the financial capital of the US… and businesses will always flock there for its top talent and global appeal…

Not so fast… the hatred toward the rich has grown so extreme that New York is telling big business to go somewhere else.

You probably remember Amazon’s nationwide search for “HQ2”… the company started a national bidding process where cities could offer incentives in return for Amazon bringing tens of thousands of high-paying jobs and everything else that goes along with building a massive headquarters.

NYC politicians, including our favorite, AOC, are telling Amazon to take a hike. They don’t want the retailer to come in to the city and push up real estate prices (Amazon also said it won’t support unions). Nevermind that the majority of New Yorkers are for it.

And Amazon is seriously considering leaving. That would cost the already-broke city an estimated $27.5 billion in tax revenues over the next 25 years.

But math doesn’t come into the equation. It’s silly, ideological grandstanding that is now commonplace with the rising socialists.

And it’s more harmful than just Amazon potentially leaving… it doesn’t send a good message for future companies considering New York as a place to do business.

So New York City needs money to plug its budget shortfall. But it’s actively chasing out the rich people that will happily pay their absurd taxes.

Next door in New Jersey (which has lost two million residents between 2005-2014), the situation isn’t any better.

They’re so desperate, they want to tax RAINFALL.

If you own a building with a large, paved surface (like a driveway or parking lot), the state wants to tax you because your property is responsible for storm water runoff.

And this trend is only going to get worse. You can expect more socialist rhetoric, more proposals to creatively tax the evil rich and more outright damnation of success over the next two years (and potentially longer depending on who takes the presidency).

The smart people have already started voting with their feet, moving to lower-tax states.

I did the same when I moved to Puerto Rico. I don’t think there’s anywhere better for a productive person who wants to enjoy the fruits of their labor (with Act 20 and Act 22, you can legally reduce your corporate taxes to 4%, and your capital gains and dividend taxes to 0%).

All while living on the beach.

Remember, Puerto Rico had to hit rock bottom before implementing these incentives. I’d guess New York won’t be far behind… but I doubt they’ll make things friendlier for productive people.