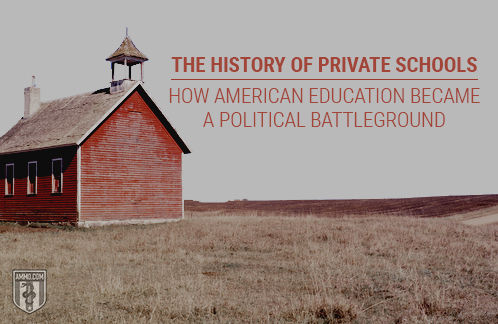 Public schools are so ubiquitous and ingrained in American culture that one could easily be forgiven for thinking that we, as a nation, have always had them. However, public schools are a relatively recent invention. Federal funding for public schools is a recent anomaly, dating back to the days of President Jimmy Carter. His successor, President Ronald Reagan, famously tried to dismantle the Department of Education to no avail.

Public schools being an arm of the state are indoctrination centers. This becomes increasingly true as basic skills such as the old “three Rs” of “reading, writing and ‘rithmatic” are jettisoned in favor of climate change, critical race theory and gender ideology – all of which are now part and parcel of a public education in the United States. As if this weren’t troubling enough, public schools are largely funded by property taxes on housing. These taxes, which are paid generally on a bi-annual basis, are confiscated from people whose children do not even attend public schools. What’s more, these taxes require people to effectively pay rent on owned property under penalty of losing their homes.

We do not have to look far for an alternative to the world of public schools. Throughout most of American history, education has been the purview of parents, the church, and other private institutions. The rise of public education in the United States is a story of violence and coercion that is largely hidden from the public record. After reading this, you will never view public schools in the same light ever again.

Public vs. Private vs. Vouchers: How It All Works

Before we get into the meat of the matter, it is worth explaining some things about public education, private education, the voucher system, and how each of these works.

All told, 10 states provide vouchers for children to attend private schools as of 2019. Vouchers are either coupons directly paid to private schools or tax credits that reimburse parents at tax time. President Donald Trump has said that he wants to distribute $20 million in federal education dollars as block grants to states that would take the form of school vouchers.

The Pre-History of Public Schools in the United States

Unsurprisingly, public education in the United States was primarily a regional phenomenon in the earliest days. New England was known as one of the first places with public schools. However, these were not “public” in the sense that we think of public schools today. First of all, the schools were not compulsory. While Massachusetts and other New England states did have compulsory education laws, these did not mandate the use of the public schools nor any other education method for that matter. They only required what was called “proper education,” which in many cases might not have included basic literacy.

Continue reading The History of Private Schools: How American Education Became a Political Battleground at Ammo.com.