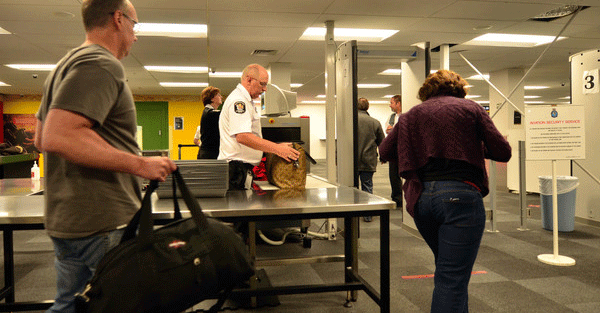 Patience Urged as Airport Security Lines  … Travelers across the country have endured lengthy security lines, some snaking up and down escalators, or through food courts, and into terminal lobbies. At some airports, lines during peak hours have topped 90 minutes … The biggest help to ease lines is to have more fliers enroll in the PreCheck program. – Chicago Tribune

Homeland Security wants to force more travelers to become “known” to the government via PreCheck programs.

Ultimately, it seems, Homeland Security hopes to be the arbitrator of who flies in the US and who does not. This is how fascism encroaches on public life, not all at once, but a little bit at a time.

How do we know? Our specialty is analyzing the “memes” of mainstream media, the propaganda regularly presented to create acceptance for globalist solutions.

Let’s analyze the steps taken in this case. The TSA has been embarked on a process to make airline check-ins more rigorous.

The confluence of events leading up to this point started last year when a TSA internal investigation revealed security failures at many of the nation’s busiest airports, where undercover investigators smuggled weapons through checkpoints in 95% of trials.

This caused the TSA to tighten screening methods and stop procedures that helped facilitate the faster flow of passengers, such as allowing TSA officers to use their judgment in moving certain people, such as families with children or the elderly, into the PreCheck lines.

The TSA and Homeland must have known that wait times would soar if more rigorous screening was implemented.  They did it anyway.

But here’s the real reason, as we read in a just posted AP Article:

In the past three years, the TSA and Congress cut the number of front-line screeners by 4,622 — or about 10 percent — on expectations that an expedited screening program called PreCheck would speed up the lines. However, not enough people enrolled for TSA to realize the anticipated efficiencies.

In other words, PreCheck has been in a failure. Not enough Americans have been willing to make themselves “known” to Fedgov and Homeland Security.

The way to fix it is to make people so miserable that they join.

This is a good but minor example of what we call “directed history.” Misery is a prime tool for manipulating people into cooperating with authoritarian strategies.

We’ve written about the PreCheck program in several articles. (See one HERE.) The idea is to create a situation where the federal government itself is the arbitrator of whether you can fly or not.

If you get an OK from the Department of Homeland Security, you can be quickly and safely on your way.

If not, you will have be subject to invasive pat downs, luggage searches and aggressive questioning.

If you don’t act in the “right” way, you may be hauled into a back room and questioned. As part of the process, you’ll miss your plane.

Avoiding the horror of airport screening checks is an ever-more serious priority for even irregular travelers.

ABC News, conveniently, has just posted a Q and A about PreCheck:

A: The program allows previously vetted fliers to use special lanes at the checkpoint. Shoes, belts and light jackets stay on. Laptops and liquids stay in bags. And these fliers go through standard metal detectors rather than the explosive-detecting full-body scanners most pass through.

The positive “spin” of this message can be found elsewhere in the same words. Quite possibly Homeland issued a media press release.

ABC News explains that PreCheck is several “expedited entry programs,” not just one. They include Global Entry, Nexus and Sentri.

(Global Entry … Are there plans to expand this sort of program around the world?)

It costs between $50 to $100 for five years and applications can be completed online. “It then takes some time for the government to approve the application and schedule an in-person interview, typically at an airport.”

In other words, the process includes an actual in-person screening. Once approved, the individual becomes a “known traveler.”

Known to the government, that is.

Interestingly, in order to speed your travel, airlines will check directly with the government to  ensure your “knowingness.”

Thus it is the distinctions between the commercial and the regulatory blur. Now there is no clarity as to whether one is doing business with the airline or with the government.

Airlines put up with the system because they have no choice. If one won’t cooperate, another will be substituted.

The airline industry has often been called one of the most competitive in the world but in a sense this is entirely untrue. Most large airports are public – owned by governmental entities.

A truly competitive, private industry would include privately owned airports. But that is not the case.

In many ways, airlines are basically extensions of government at this point. They provide the clerical help and mechanical resources. The government decides who goes where and how long it takes.

A quick check of mainstream media articles over the past 24 hours provides a clear insight into how Homeland Security is manipulating the bought-and-paid-for US media.

Every article featuring the long wait lines in airports urges travelers to become “known” to the government.

Here’s the way USA Today just reported on it:

Security officials have made  a public push for travelers to join Precheck, which allows pre-screened travelers to keep on shoes and belts and leave laptops and small containers of liquids in carry-on bags as they pass through the checkpoints.

Precheck registered 2.36 million members by the end of March, but officials want to recruit millions more. To join, travelers pay $85 for five years and provide fingerprints and some biographical information.

American Airlines and others are encouraging travelers to join Precheck … 10,000 people applied for Precheck on Thursday, which nearly tripled the pace of 3,600 people per day in March 2015.

10,000 people just applied? So it is working. Make everyone thoroughly miserable and people will clamor to reveal their travel plans to government and to become “known.”

Conclusion: Authoritarianism and fascism come to countries in pieces. Learn to “read between the lines” and you will understand more fully your situation vis a vis the government that supposedly represents you.