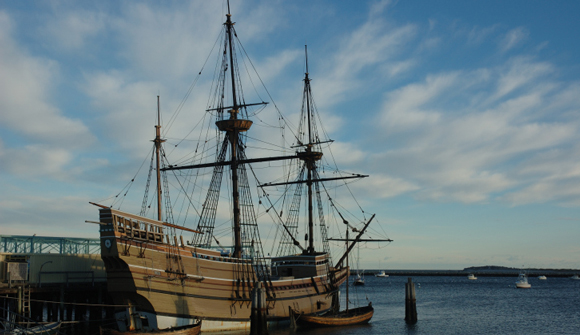 When settlers first arrived at Plymouth, their first attempts to survive were disastrous.

Everyone was expected to work in the fields planting and harvesting, and everyone got to share the final product.

But under these conditions life was misery. In the first year, many of the first settlers starved to death. They needed to come up with something quick, for the sake of survival. So what did they do to encourage a great boom in their tiny economy?

In his journal, “Of Plymouth Plantation” 1620-1647, Governor William Bradford writes about the dilemma and the solution they found.

So they began to think how they might raise as much corn as they could, and obtain a better crop than they had done, that they might not still thus languish in misery. At length, after much debate of things, the Governor (with the advice of the chiefest amongst them) gave way that they should set corn every man for his own particular, and in that regard trust to themselves.

They abandoned the supposedly utopian system of communal sharing and decided that people were now responsible for their own survival. The land was portioned among families based on their numbers, and anyone who did not have a family in Plymouth was assigned to a household.

This had very good success, for it made all hands very industrious, so as much more corn was planted than otherwise would have been by any means the Governor or any other could use, and saved him a great deal of trouble, and gave far better content. The women now went willingly into the field, and took their little ones with them to set corn; which before would allege weakness and inability; whom to have compelled would have been thought great tyranny and oppression.

What happened was simple. Now people knew that their survival, and that of their family, relied entirely on their own production. They knew that whatever excess they grew or manufactured would benefit them rather than being given to someone who hadn’t worked as hard. This got more people into the fields to work. And of course, the excess production still benefited the whole of the colony. People could now specialize and trade, meaning more wealth for everyone. Now it paid to innovate.

In his journal Bradford discusses what happened when the settlement shifted to every-man-for-himself. He laments the “vanity and conceit” of Plato and other philosophers’ claim:

…that the taking away of property and bringing in community into a commonwealth would make them happy and flourishing; as if they were wiser than God. For this community (so far as it was) was found to breed much confusion and discontent and retard much employment that would have been to their benefit and comfort.

When you get to keep what you work for, people work harder, and produce more. When people produce more than they can consume, this benefits others in the society who get to trade for the extra goods. This type of situation also leads to specialization in a particular field.

If someone produces extra food, he can then trade it. Then if someone else produces extra cloth, she can trade that. People who are good at something, can market that skill in exchange for something which they are not good at producing. When they have something to gain from extra cloth and food, they will work harder to produce more in order to trade the excess. Again, this benefits everyone, as there are now more goods available—overall production has increased because there is more to be gained from working hard.

For the young men, that were most able and fit for labour and service, did repine that they should spend their time and strength to work for other men’s wives and children without any recompense. The strong, or man of parts, had no more in division of victuals and clothes than he that was weak and not able to do a quarter the other could; this was thought injustice.

And rightfully so. Why should one person spend their time working to support others for no reward? When he is rewarded for his effort, it is justified that he works for “other men’s wives.” And as the pilgrims found out, this actually puts him in a better position to support others.

And for men’s wives to be commanded to do service for other men, as dressing their meat, washing their clothes, etc., they deemed it a kind of slavery, neither could many husbands well brook it.

Instead of being compelled to wash others’ clothes and dress others’ meat, it was now done in exchange for another good or service. They moved on from “slavery” to mutually beneficial transactions. Bradford adds that such was the experience of good standing, God fearing men, “And would have been worse if they had been men of another condition.”

This provides us a perfect microcosm of society to study. In isolation, the principles of economics were obvious. On such a small scale it is easier to see that when you consume something you have not produced, you are taking that away from the producer. When society is set up to allow those conditions, there is less produced. When people are allowed to keep the products of their labor, more is produced, and all of society benefits. This also encourages innovation to create excess goods, which can be traded for the benefit of the producer, while also benefitting the other trader.

The plantation started with a restrictive economy. People were compelled to work, yet this requirement did not produce enough for every to live. They thought it was an unjust society, they lamented having to work for “others’ wives” or wives having to work for other men. Morale was down, and production was down, since there was no benefit to working harder. People starved to death, because of the lack of necessities grown and produced.

If they hadn’t realized their mistake and turned things around, they would never have produced enough to hold the first Thanksgiving. Only a free market allowed the conditions to give thanks for how much they produced.

The pilgrims were thankful that they had solved the problems of starvation. No one felt enslaved, instead they felt empowered. They could go as far as their brain and hard work would take them. The quality of life advanced for everyone because of the seemingly selfish doctrine that each person keeps what they produce.  And even the people in Plymouth who could not support themselves benefited because now there were enough excess goods to go around.

This Thanksgiving we can be thankful that Plymouth Plantation set the tone for individual freedom. They tried an experiment in government, and it paid off.

Be thankful for freedom.