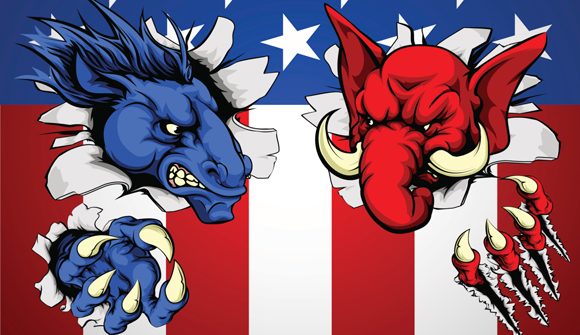 STAFF NEWS & ANALYSIS
How do we keep getting dragged into this electoral spectator sport?
By Joe Jarvis - November 06, 2018

Little more than a bare-knuckle boxing match. If you were to suddenly catch a glimpse of such a fight, you would see real blood, real punches, swollen lips, black eyes, and a final knockout.

It looks like a real spontaneous fight. But the match was planned, set up, with rules and parameters.

That’s an election. Except that it is shoved in all of our faces, while they lie and tell us it wasn’t a planned fight.

Not interested in seeing the blood and gore? Not interested in watching two people beat each other to a pulp? Well, you can turn off the boxing match, but good luck avoiding election coverage.

There wouldn’t be anything riding on the match if we weren’t all convinced to place bets on it. Now it matters. We’ve put down our wagers, we’ve added skin to the game, and now we care.

Some of what we have riding on the election is psychological. We have staked out a position, and right or wrong, and we want our side to win.

Somehow we think the majority will vindicate out beleifs, and make us feel more right… even if the last election did the opposite.

Ironically, an online poll shows that just 51% of Americans have faith in democracy. The slimmest majority… all that is required to maintain power over the minority.

Not discussed enough is the actual money industries have riding on the elections. Which contractors will be enriched with federal dollars? The military contractors? Those peddling carbon credits?

Will more money go to ICE or the EPA? Will workers be hired for federal prisons, or the IRS?

But these are all manufactured issues.

We have less in common than we are led to believe.

I know, I know, we are supposed to all be one happy family and sing kumbaya around the campfire.

That is obviously not happening in the realm of US politics.

We can go our separate ways, and this will actually be more peaceful.

But we can’t agree to disagree when the other side will force us to agree, as long as they get a majority.

Both the right and left in the American political machine find reasons why we can’t go our separate ways.

For example, the left cites the environment for why we can’t just leave people alone. They think individuals need to be forced to engage in stopping global warming since their actions could contribute to the problem.

The right says united we stand, divided we fall. You need to be forced to fund a military larger than the next ten on earth, because, without it, we would all be less safe. You benefit from it, they tell us, so you will be forced to fund it.

However true the threats may be, these are still boogeymen.

Whatever disasters climate change may cause, government action to combat climate change will be worse. Their solution is to halt economic activity, reverse progress, and cast segments of the globe into poverty to attain their goals. They’ll probably still fail, despite dismantling the economy, and the intervention will cause negative repercussions we can’t even imagine.

And whatever conflict the USA prevents with its giant military, the standing arming poses just as large a threat to our peace and prosperity. But even the military’s best intentions threaten us. Actions to stop terrorism make us less safe. Every family member killed by a drone creates terrorists out of his or her brothers, sisters, cousins, and nephews.

So we are convinced to pay attention to this boxing match, to put our money down, and to whoop and holler in the stands when our guy lands a good punch.

But the only reason we even care to spectate is because the outcome of this manufactured conflict will affect us.

It probably effects us less than we are led to believe…

But you can’t deny that more tax dollars are at risk, more freedoms could be quashed, more laws enforced.

The elections aren’t cutting it.

I already know who is going to win the election. The government. And their cronies.

It hardly seems to matter which “side” gets the spoils.